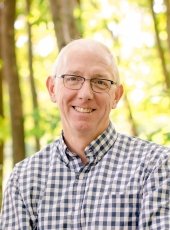 How do birds respond to land use and fragmentation?

My research focuses on how organisms interact with their environment with particular attention to human altered ecosystems and those species that are most sensitive to such changes. I am interested in spatial aspects of habitats such as the arrangement of patches in the landscape and how these can influence demographic traits of species. I have worked to understand how birds are influenced by forest management directly through nesting proximity to forest openings. I also study the ways that broad landscape pattern can influence densities of keystone ungulates such as white-tailed deer (Odocoileus virginianus) and how such human commensals can have negative cascading effects on sensitive community members such as understory herbs. Much of this work was done at Sleeping Bear Dunes National Lakeshore.

As a researcher in conservation biology, I have studied the influence of a variety of human activities on natural ecosystems, including key contemporary issues, such as the effects of forest fragmentation on songbird demography, the influence of riparian forest management on bird, fish, and aquatic invertebrate communities, the ecological role of overabundant deer in island national parks, and how to best facilitate the transfer of basic and applied scientific research to management. My background in conservation biology has emphasized multidisciplinary approaches to solving scientific and societal problems.