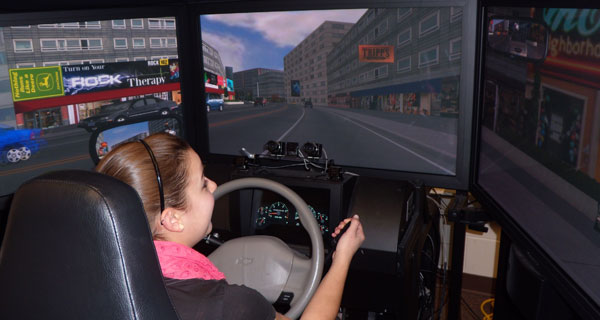 Keeping it on the road. 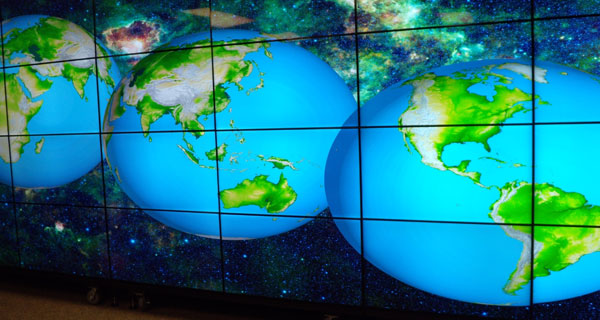 Moving your body produced different notes and tones on the keyboard. 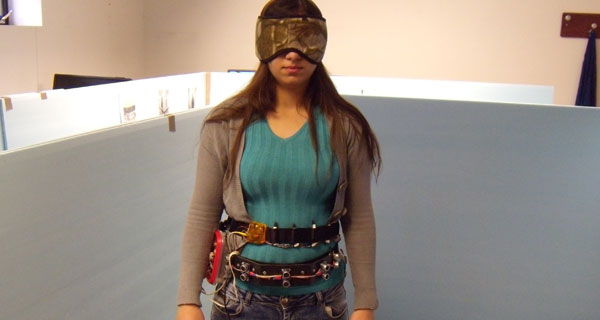 Usability testing included helping the blind get around. 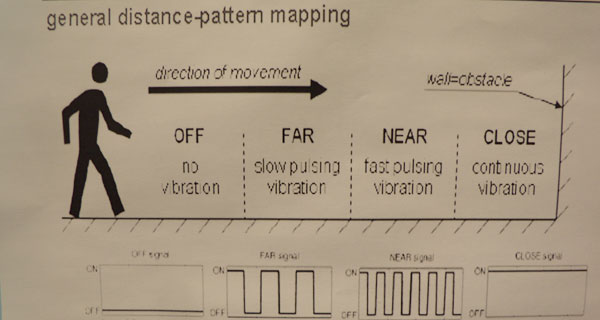 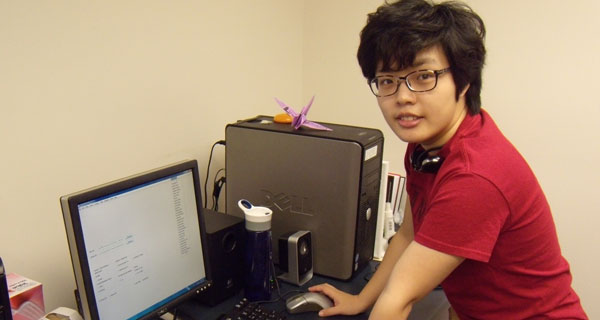 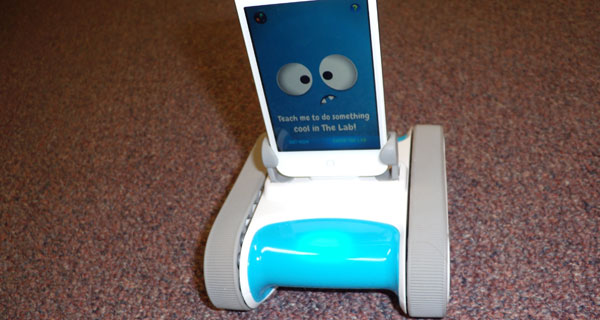 He wants to play.

We celebrated World Usability Day Thursday. Held all over the globe, it highlights the importance of humans as participants in technology. Sounds like just the job for Tech students, and many projects on campus proved that point.

We started with a driving simulator, staffed by Jason Sterkenburg, a master’s student in applied cognitive sciences and human factors. He was joined by Angela Becia, a management and marketing major who was putting the “Chevy” through the paces.

“We are looking at a couple of factors,” Sterkenburg said. “Emotional driving, like being in an angry state, and secondary tasks that affect driving performance, like drinking coffee and other things that can distract drivers.”

They use EEG’s as part of the emotional state testing, looking at heart rate while the drivers search the visual field, and facial details and other physiological features.

As I can attest, the simulator was much harder than it looked, and although I didn’t get angry, I was a lot worse driving it than I was on the road (I hope).

In the EERC, a wall of monitors was transformed into a sliced globe and a keyboard. On the wall of globes a wand could be waved over different nations to hear various languages welcome you to Michigan Tech, and you could choose between male and female voices by flipping the wand.

Steve Landry, a master’s student in psychology, was showing how a massive keyboard worked, too. Stepping on different parts of the floor, with different emphasis, he played and changed musical notes and tones.

Ultimately, Philart Jeon, an assistant professor in cognitive and learning sciences, wants to bring in dancers whose moves will create different notes.

“Instead of dancing to music, they will be creating new music when they move,” Jeon said.

In the Meese Center, a bevy of labs were busy. Yuanjing Sun showed me auditory menus, so the vision impaired could make their way around a computer interface. Menu options would speak out, making it easier to find  links, including an ingenious alphabetical list of names that would sound off.

Nearby, Shabnam  Hosseini was wearing a blindfold and a belt that looked liked Batman’s. The belt emitted sound waves to warn her when she got close to a wall.

“It vibrates, too,” she said. “The closer I get to the wall, the sound and vibration increase.”

Elsewhere, an iPod-driven mini-robot was buzzing around looking for someone to play with. Targeting children with autism, the little bot will help them with emotional and social interactions, especially when the research is recorded by several cameras and fine-tuned.

Finally, Strong Arm, a student team working on a hand-cycle for wounded veterans, had improved upon previous Senior Capstone Design projects on the bike. Strong Arm is refining it for reliability, performance, and cost effectiveness. The hand-cycle was tested at this year’s Detroit Free Press Marathon and was featured in last year’s Army-Navy football game.

“WUD UP [World Usability Day UP] gets a little bigger and a little broader every year,” said Charles Wallace, associate professor of computer science and coordinator of the day. “We had a great mix of events and participants. It is inspiring to see the range of efforts that people are undertaking to make technology serve humans better. It’s clear that usability is key to making life healthier, more productive, and more fulfilling. I hope that WUD UP helps to spread this message further.”

As I walked back to the office, I was impressed, again, but what our students and faculty are doing on campus, and so much of it has a noble purpose.

Snowfall Totals
I just can’t. We still have leaves to rake.

Mechanical engineering faculty from a private Indian university will soon be pursuing their PhDs from Michigan Tech.

The new agreement with Vidya Pratishthan, located in Baramati, India, creates a 2-plus-2 PhD program in mechanical engineering for faculty, plus a 1-plus-1 master of science program for students.

Rob Handler is about to harvest his research. Typically, that means the gigantic kale and nice-sized onions and basil he’s growing nine stories up in the Dow Environmental Science and Engineering greenhouse. Today, though, it means the key ingredient for fish tacos, to be served at a residence hall.

In a single day, the  brothers of Lambda Chi Alpha raised over 6,000 pounds of food during the annual food drive for Little Brothers Friends of the Elderly. The Michigan Tech fraternity is also taking donations throughout the next couple of weeks and expects to add another 2,000 pounds by the end of the month.

Today’s university students are reminded to be careful about what they put up on their Facebook or Twitter accounts. Sometimes they forget, and that’s a job for Clean It Up, the winning entry in the fifth annual Bob Mark Elevator Pitch Competition held recently on campus.

The Phi Taus were having a gathering in Hancock this past weekend and a couple of them stopped by to chat. Brian Kolak ’84 and Alan Wood ’87 ’89 were in town and looking forward to finding some pickled eggs, maybe at  Bill’s B&B, which re-opened. Brian is an EE working with Rockwell Collins and . . . [ Full Story ]

It’s become a popular and successful strategy. Graduate School staff venture to Thailand to recruit, and they get a lot of help from alumni over there.

Chang Park is an entrepreneur, a philanthropist, a social activist, and a visionary. He is the president and CEO of Universal Remote Control Inc. (Harrison, New York), a world leader in technology, innovation, and quality. Born and raised in Korea, he came to the US alone as a teenager to pursue an education. He soon . . . [ Full Story ]

Jamie Phillips made 22 saves including 12 in the third period as Michigan Tech defeated Lake Superior State 2-1 tonight to split a weekend series at the John MacInnes Student Ice Arena. Senior Ryan Furne scored for a 2-0 lead with 9:27 left, but it took several key saves from Phillips to earn . . . [ Full Story ]

Michigan Tech closed out its 2013 football season with another tight victory, defeating Wayne State 28-21 on Senior Day at Sherman Field. Senior linebacker Taylor Ziolkowski had a career-high 17 tackles plus the game-clinching interception in the final minute help the Huskies finish 6-4.

Tech’s defense held the Warriors on downs twice in the . . . [ Full Story ]

Austin Armga carried the Michigan Tech men’s basketball team to a 78-58 victory over Minnesota Duluth in the season and home opener at the SDC Gym on Saturday (Nov. 16) afternoon. Armga tied a career-high with 29 points on 12-for-19 shooting from the floor.

The No. 21-ranked Michigan Tech women’s basketball team surrendered a late lead on Saturday (Nov. 16) and fell 68-63 to Minnesota State Moorhead in its second game at the Radisson Roseville Classic on the campus of Concordia-St. Paul. Kylie Moxley and Danielle Blake were named to the all-tournament team.

Maybe you endured this mess, after Thanksgiving, in 2007.

Does anyone know the history behind the Bent of Tau Beta Pi? It is now located between Rekhi Hall and the Van Pelt and Opie Library.

Oh, guess I’m getting old too, but I think they went to the 1st floor lounge which could also be accessed from College Ave by a short flight up. In this pic, the ground floor is the cafeteria where I took my meals while living in the “New Dorm”, now Wads, which had no food . . . [ Full Story ]

Dennis,
With respect to the items reminiscing about Jon Davis and the Library Bar, one of my memories of Jon was his involvement in the then annual road rally events held each spring. Myself and a friend participated in several of those races the last couple of years I was at school. Attached is . . . [ Full Story ]

When I entered Tech in “55, I believe it was a requirement that all engineering freshmen had to take a one term basic Shop course. I was an EE and remember some of my lab projects: arc welding, torch welding sheet steel, and yes forage welding chain links. I never developed any of these skills, . . . [ Full Story ]

Dear Dennis,
The comments on Van Orden’s Hill brought back some memories of the many steep hills in Houghton and Hancock. Some of these had downright dangerous grades even under clear, dry conditions; and I marvelled that the locals could negotiate them successfully in all types of weather.

I haven’t had time to read many of your newsletters, but did read this one.

The story about Prof Vichich caught my eye. I struggled horribly to get through calculus, but heard that Vichich was tough but you learned the material, so I signed up for his Calc 2 course. It was true, he was . . . [ Full Story ]