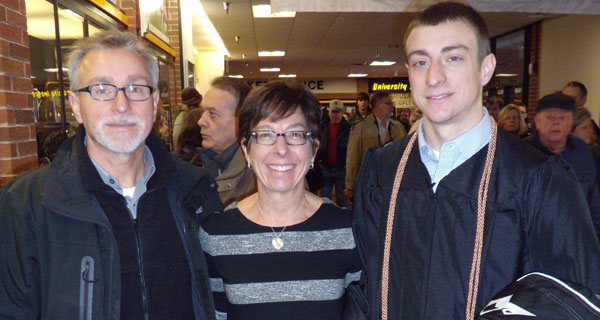 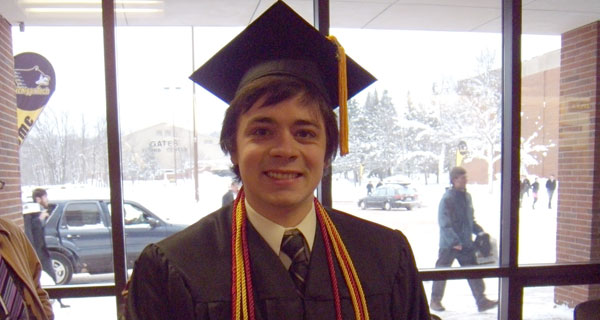 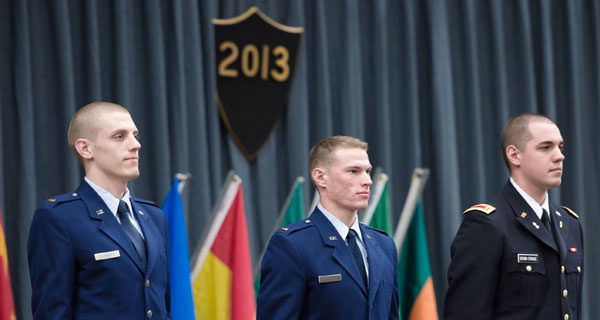 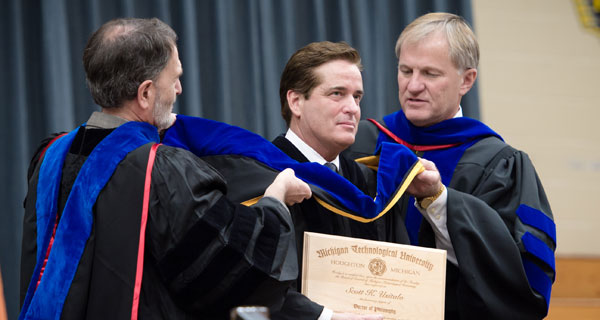 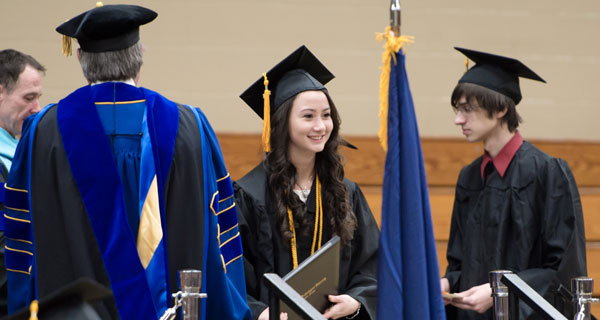 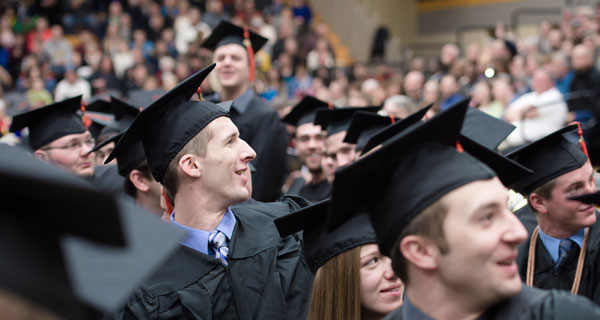 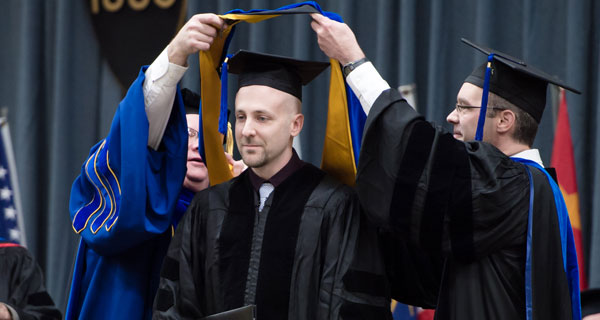 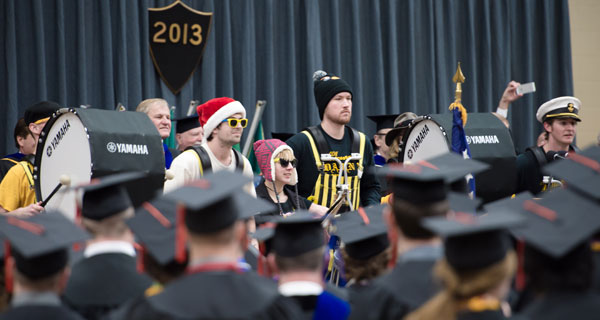 Who let these guys up here? 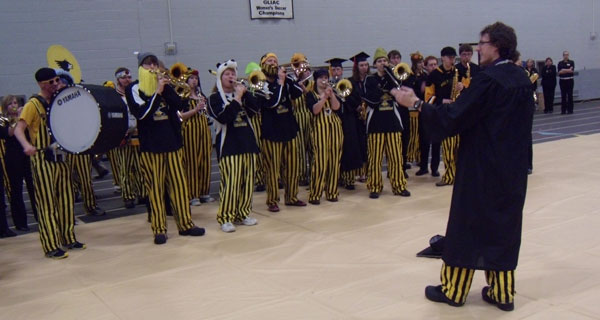 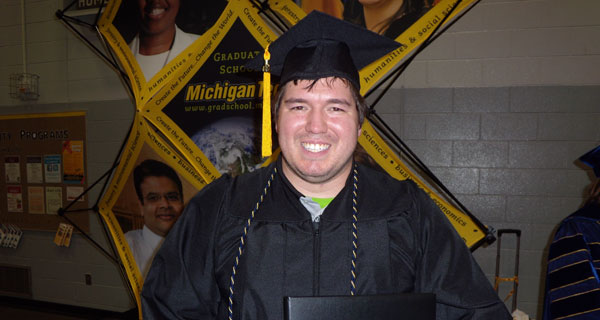 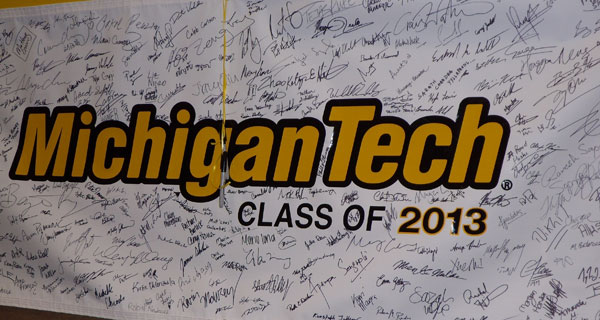 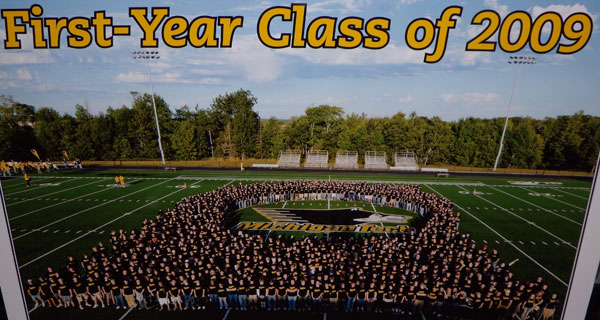 A frigid morning greeted the midyear graduating class of 2013. Many of their parents streamed into the basketball gym early to get good seats.

I instantly ran into to Matt Younger and his parents, Kate and Lloyd ’89, from Mukwongo, Wisconsin. Matt was a member of our National Champion Mining Team (see story), and was on his way to an MBA.

Nearby, Tyree Hall from Clinton Township, Mich., was celebrating with mom, Briana. Tyree was getting a degree in communication, culture, and media and looking forward to a career in student affairs. Devon Lindley, psychology grad from Hart, Mich., is a Phi Tau who helped plan Orientation this year. He will pursue a master’s in counseling or counseling education. Briana and Devon also did a little face time for the local TV station.

Evan Allen was getting his EE degree, then off to Southfield, Mich., where he will work for a contractor at Eaton, doing automotive testings with other engineers. David Brown-Strange was getting commissioned in the Army and heading to Appleton, Wisc., and the 395th Army Reserve Unit. He’ll be working with H&CS Engineering Solutions company.

We were fortunate to get two great speeches during the ceremony. Student speaker Felicia Nip began by talking about all the unique things students have experienced while at Tech. She mentioned the Northern Lights. “If you missed them while you were here, look around  at your classmates. They are the Northern Lights.”

The magic of being Husky, she said, was the adventurous, innovative students; the Pep Band; the natural history and beauty of the Keweenaw; and the people you meet on a five-minute walk across campus who will greet you with “How you doing?” wear funny t-shirts, and debate Macs vs. PCs and iPhones vs. Droids.

“Together, we’ll light up the sky.”

Scott Usitalo ’81, president of the North American Family Care Division of Kimberly Clark, was the local student coming home. Raised in South Range, he worked his way through Tech and left campus to a global career and some wisdom discovered along the way.

First, he told the graduates to look around, find their families, and say “thank you” to those who helped them so much along the way.

He challenged the graduates to explore the world, think big to solve problems, think small like cellphone technology, and lead gracefully.

“You’ll find that real growth comes when you’re down in the valleys, not at the top of the mountains. The world needs you.”

As the graduates went up for their degrees, there seemed to be a lot more applause than usual (and a few cowbells). I think the families and friends were glad to be out of the cold and celebrating the moment. One dad down below us clapped for every graduate: all 400-plus.

Afterwards, we got  Pep Band bombast, on the stage this time, which continued into the Multipurpose Room. There, Nathan Booms was leading them for his next-to-last time. He would do so again at the hockey game that night. He was heading to Kansas to work with Garmin, using his computer engineering degree.

We met a former Blizzard, Andrew Kennedy, who was using his biology degree to get into grad school. He might be staying at Tech and staying in costume. But you’ll never know if it’s him.

Finally, our first PhD in Atmospheric Sciences recipient, Matthew Beals, was celebrating with advisor and physics professor Raymond Shaw. Beals will be venturing to the MIT Lincoln Lab and working on secret stuff. His dissertation was on cloud microphysics(!).

As we left the building, Alumni Relations Director Brenda Rudiger was staffing another commencement tradition. Grads could sign a banner on the way out and get a poster of their first year here, 2009, which probably feels like a lifetime ago.

We’ve all grown a lot since then.

Snowfall Totals
In our never-ending search for numbers that reflect what we’re going through, we will use Keweenaw County snow records. They have last year’s totals built right in. Hang on to your chook.

And, if you are really missing Tech, watch this video on Facebook.

Michigan Tech will honor alumnus and longtime supporter John Edgar McAllister by building a new Welcome Center named for him to introduce future students and their families to the campus. Michigan Tech’s Board of Control at its regular meeting on Dec. 13, 2013, approved the 8,000 project, to be funded entirely by donors, with the . . . [ Full Story ]

It’s common advice: the best way to make a living is to find a way to get paid to do what you love. But few people actually make it to that point. Count Michigan Tech alumni Chris Marr ’00 and Jason Manders ’00 among those lucky enough to be able to claim they’ve done just that. . . . [ Full Story ]

Michigan Tech’s recent win in the National Mining Competition in Saskatchewan surprised more than a few of the Canadian schools who made up the competitors, and the judges. “We told them a gold mine there was not feasible,” says Matt Schuman, a junior mechanical engineering major. “The other teams tried to show how the mine could . . . [ Full Story ]

The girls outnumbered the guys on November 21st when alumni and friends from the Green Bay Chapter came out for their monthly gathering at the Keweenaw Pub. Do you live in the Green Bay area? The next gathering is on December 19th be sure to mark it on your calendar! Check out the Green Bay . . . [ Full Story ]

Alumni and friends from the Seattle Alumni Chapter gathered at for an evening of socializing and Red Wings Hockey at Teddy’s Tavern. Many thanks to Stephanie Garbacik ’10 for organizing the event.

A couple of ME’s were around this past week. John Baker ’71, one of TechAlum’s greatest contributors and a pretty good cameraman, was on campus representing Siemens at the PACE engineering design competition. He had a chance to chat with one of our student editors, Zak Dubie ’14, who will be leaving us next May.

As we approach the end of the 2013 calendar year, we want to take a moment to remind our alumni and friends that there is still time to make an annual contribution in support of Michigan Tech—and receive a 2013 tax deduction on your federal tax return (if you itemize.)

You know how strong the Husky spirit is. This year, share that spirit with the sports-minded young people in your life by giving the gift of Michigan Tech Sports Camps. 2014 summer sports camps will take place June 7–August 22. The best play, coolest coaches and the most fun you’ll have on the ice, field and . . . [ Full Story ]

It’s a rare gray day in Central Texas, but the walls of Leanne Venier’s gallery in South Austin are radiant with the rich colors of her art.”Into the Depths” glows a deep shade of garnet. Brushstrokes of cobalt and indigo in “Ageless, Boundless, Timeless” suggest the undulation of seagrass.The center of “Duration” is belted with . . . [ Full Story ]

HOUGHTON, Mich. — Michigan Tech and Bowling Green State skated to a 4-all tie at the MacInnes Student Ice Arena tonight after both teams scored three goals in the third period. The Huskies held a 4-2 lead with less than three minutes remaining before the Falcons scored twice with the extra attacker to tie the . . . [ Full Story ]

HILLSDALE, Mich. – The Michigan Tech women’s basketball team defeated Hillsdale 78-75 in overtime on Saturday (Dec. 14) afternoon to move to 5-2 overall and 4-0 in the GLIAC. Kelcey Traynoff hit a 3-pointer with six seconds left to send the game to the extra session. Mackenzie Perttu buried a pair of 3-pointers . . . [ Full Story ]

HILLSDALE, Mich. – Junior guard Ben Stelzer buried a school record 10 3-pointers and led the Michigan Tech men’s basketball team to an 84-81 win over Hillsdale on Saturday (Dec. 14) afternoon from Jesse Philips Arena. The Huskies battled back from an early 18-3 deficit to move to 5-2 overall and 2-2 in the . . . [ Full Story ]

We’d like to nail down when Blizzard changed over the years.

Many of you will recall “the Bear” that was replaced by “the Wolf” (short-lived, we think) that preceded our current mascot.

That’s our best guess. We know it is the now-famous old front steps of the Memorial Union.

Any clues on this one?

Dennis,
Ah yes – the slide rule. I purchased mine in the fall of 1960, I believe in anticipation of freshman chemistry with Doc Berry. My recollection is that there were two options,and I chose the cheap one. It was manufactured by the Frederick Post Co, model no. 1447. It came in a stiff . . . [ Full Story ]

Dennis,
This story doesn’t go back too far (like the picture of the slide rule) in your feature. When I was a freshman forestry student at Tech in 1996, I attended classes at the Ford Forestry center. All of the other forestry students attended Fall Camp in Alberta during their sophomore year. There were . . . [ Full Story ]

We had left mid-Michigan and made it to Marquette after dark on that Sunday. The snow was so heavy and blowing that all we could see were the glow of the headlights in my buddies Chevy pick-up. We were traveling about 5-10 miles an hour, bumping along the right hand snow bank so we knew . . . [ Full Story ]

Hey Dennis!
I don’t remember all of the peoples names, but prof. John Gierke could fill them in. Rob Porritt is doing the test (squatting) while (starting from the left) I, Mike?, Gary Lawson, Katie (or Emily) Bendall, Cynthia, Meg Ross and Jill observe. This was part of the Aqua Terra Tech Enterprise, you . . . [ Full Story ]

Take advantage of a “yourname@mtu.edu” email service (powered by Google) provided by your Alumni Association in cooperation with Michigan Tech’s Information Technology Services. Sign up for your alumni email account today through the HuskyLink online community www.huskylink.mtu.edu. If you are not already a member, visit www.huskylink.mtu.edu/join for details on how to join. Once you have set up your “@mtu.edu” email account, you can access your email on the web from anywhere by visiting huskymail.mtu.edu. Students are welcome to continue using their “@mtu.edu” email account after graduation.