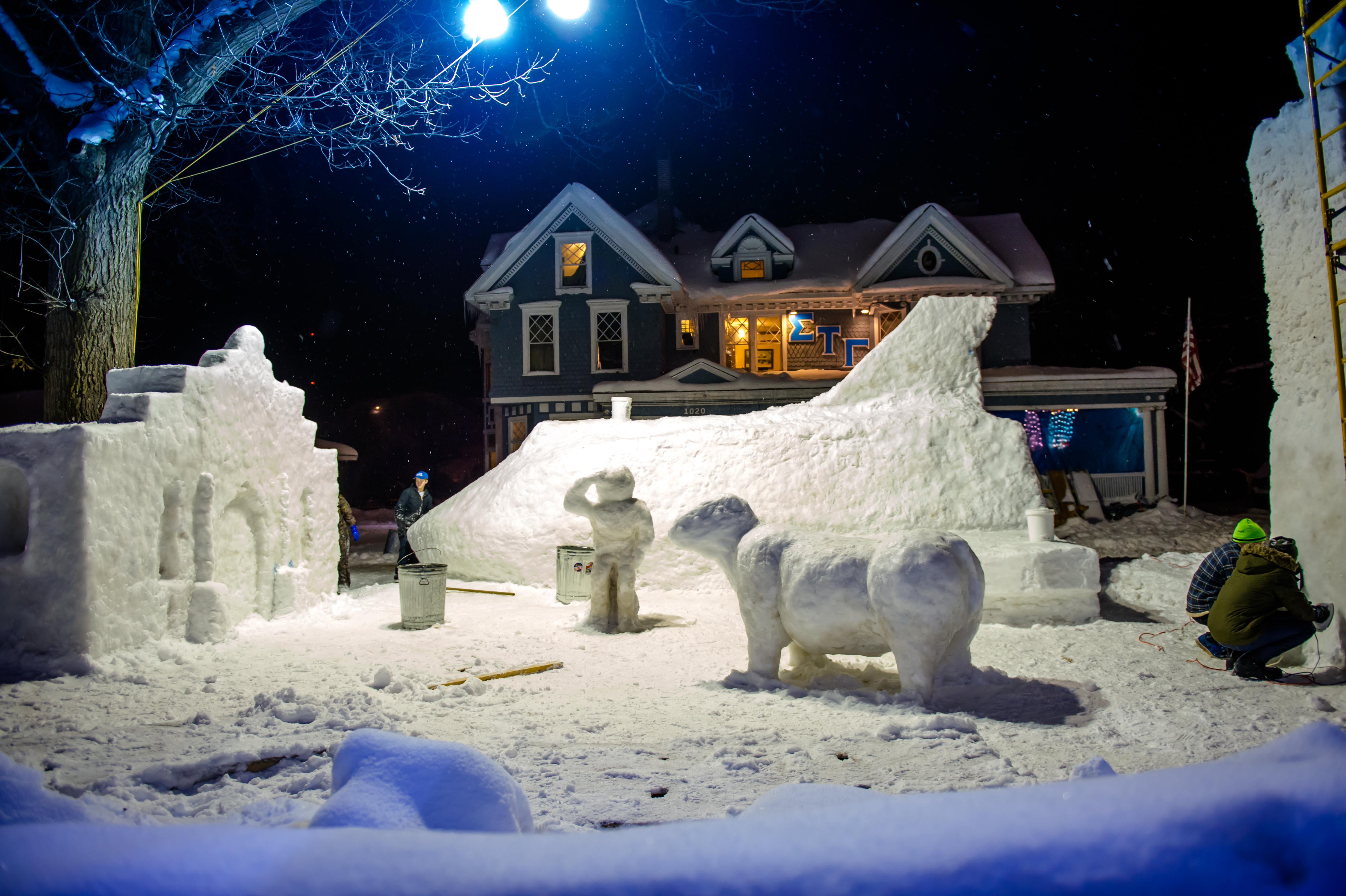 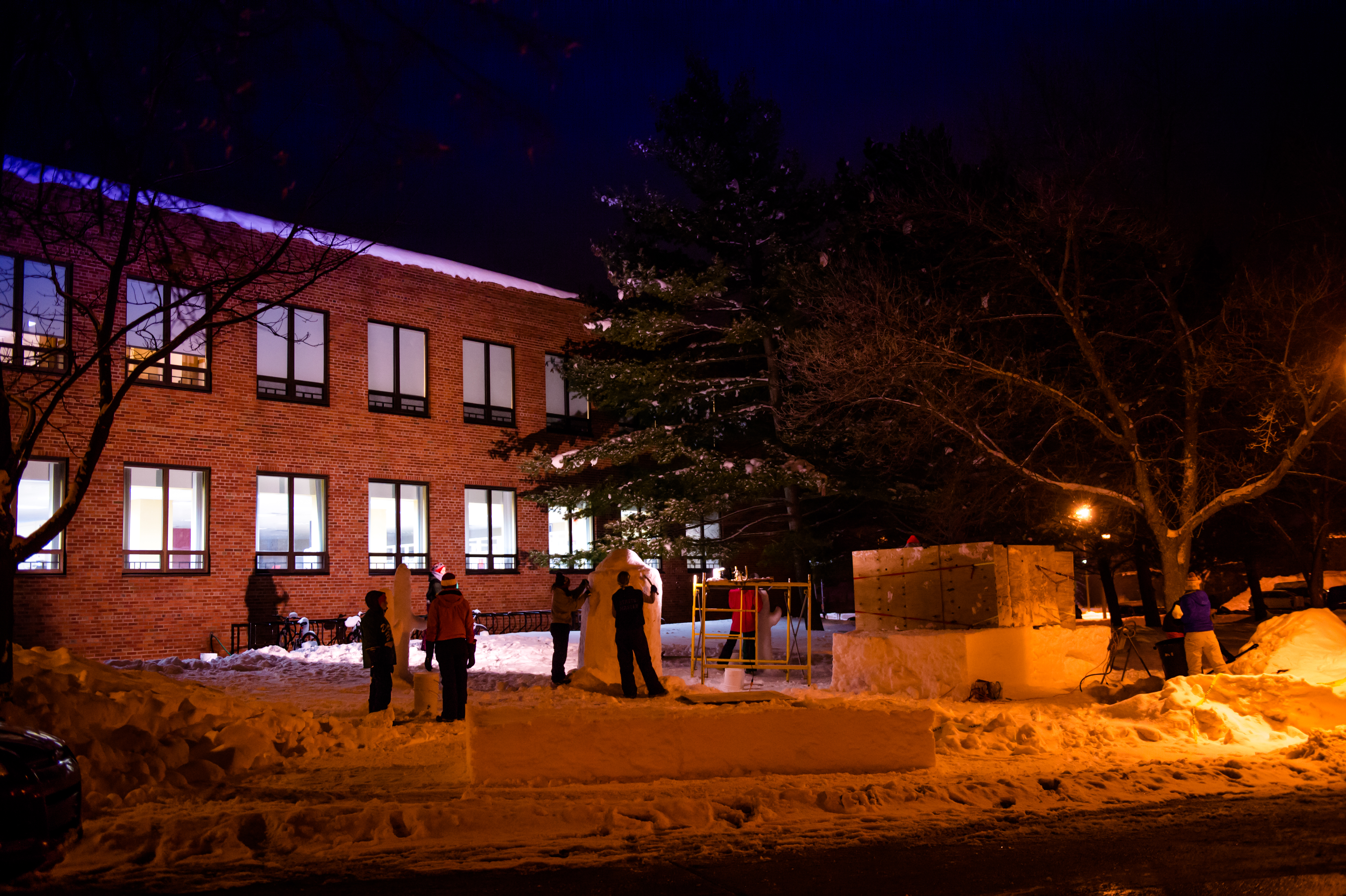 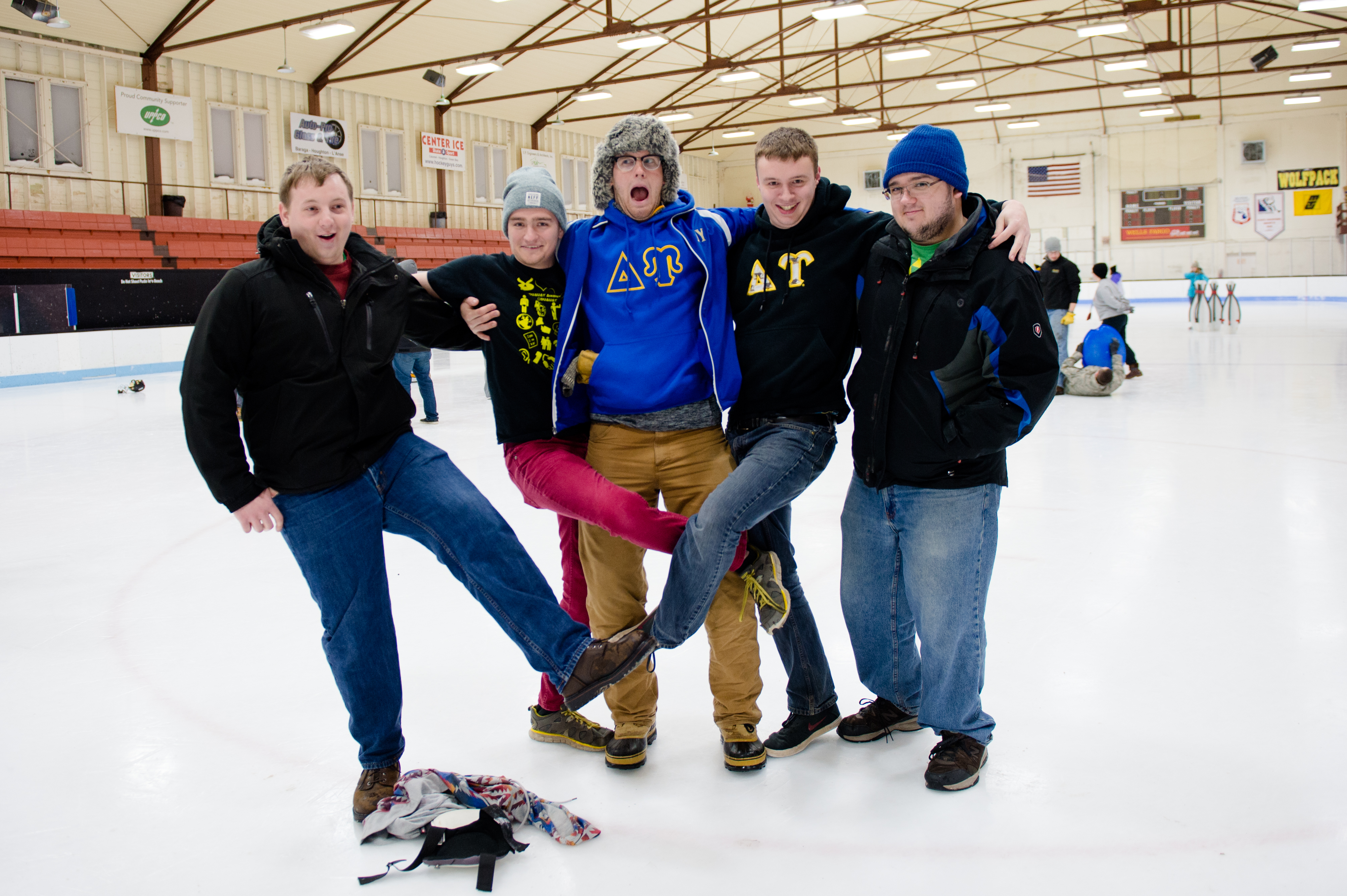 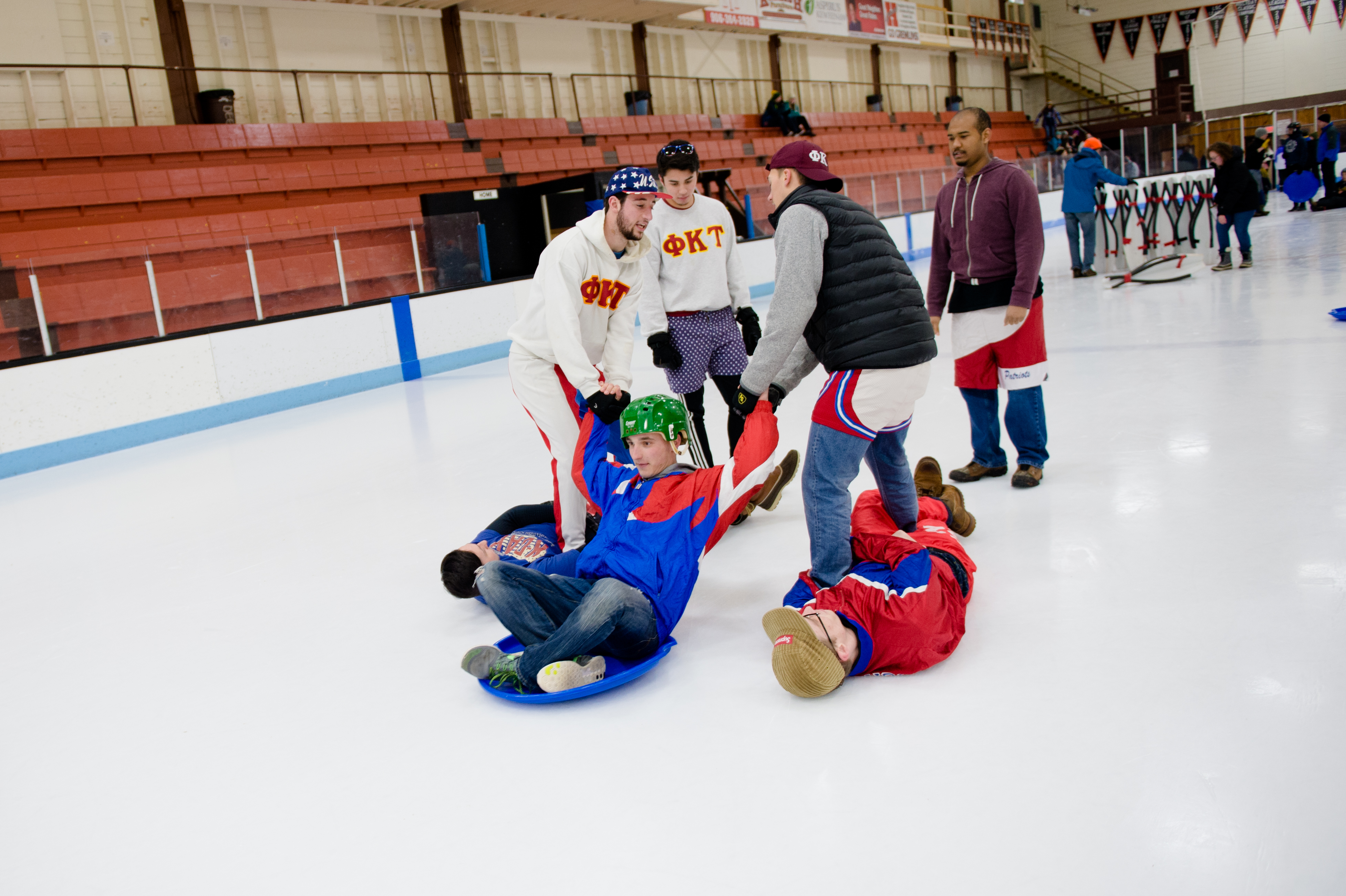 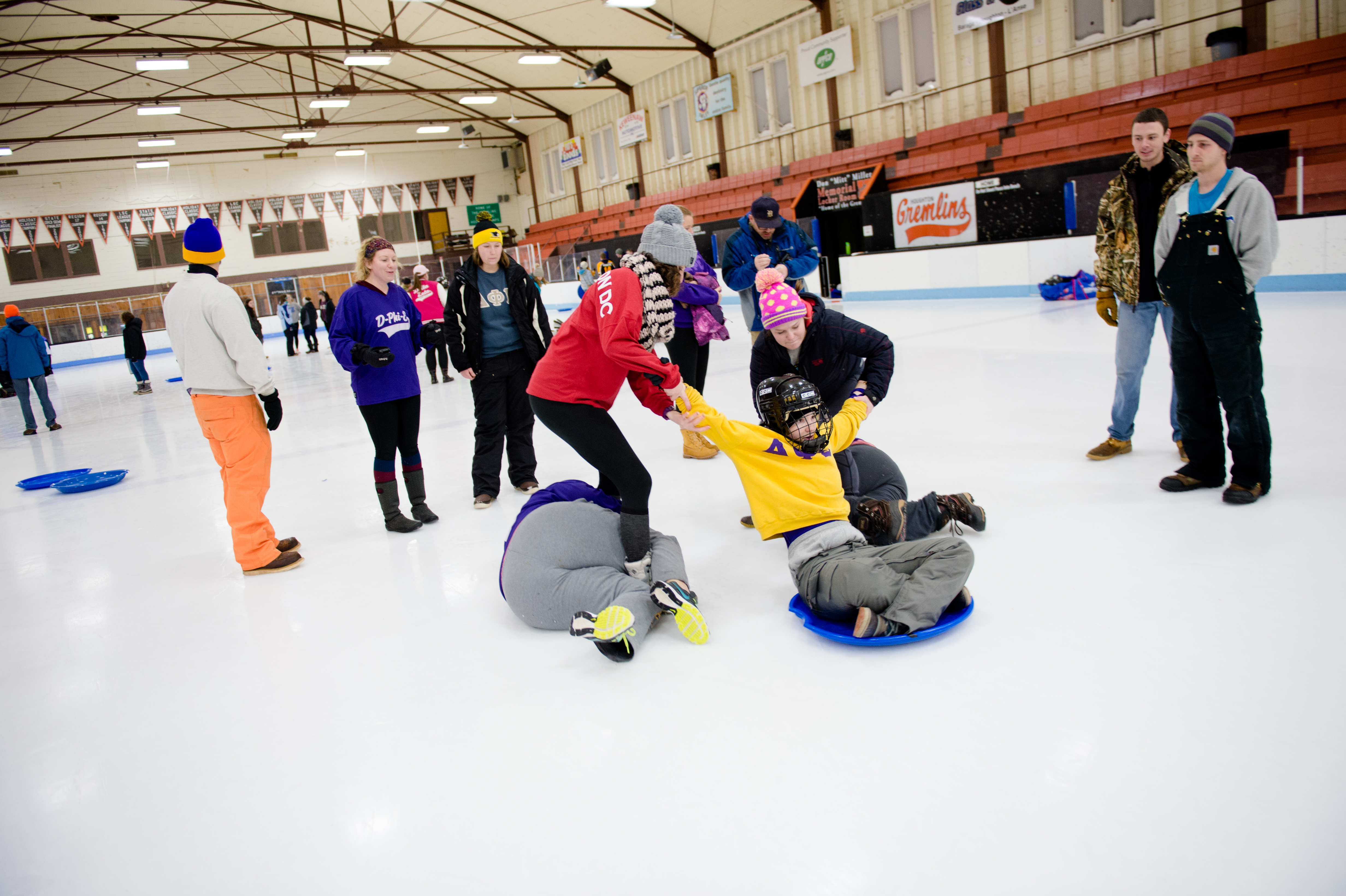 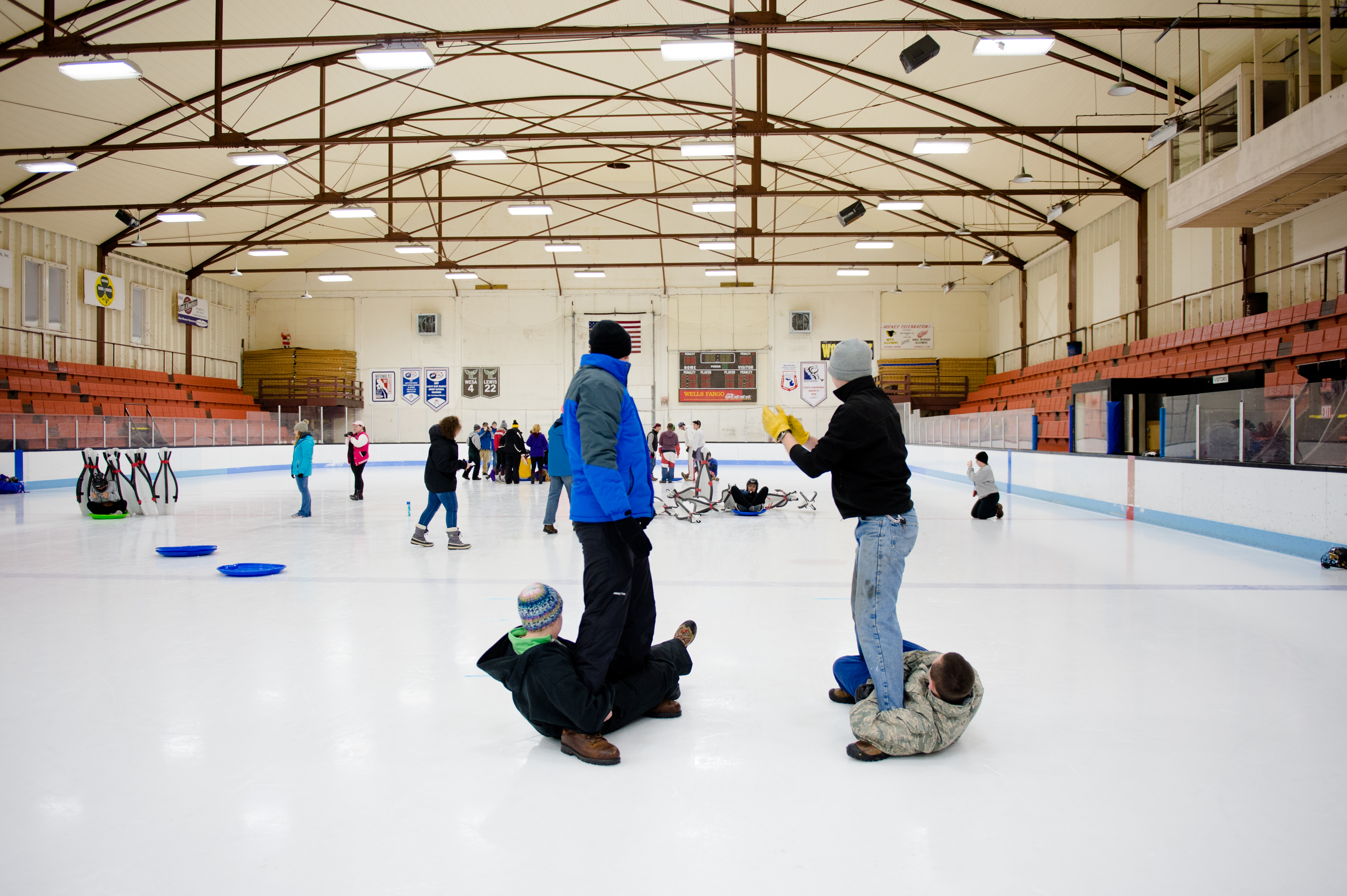 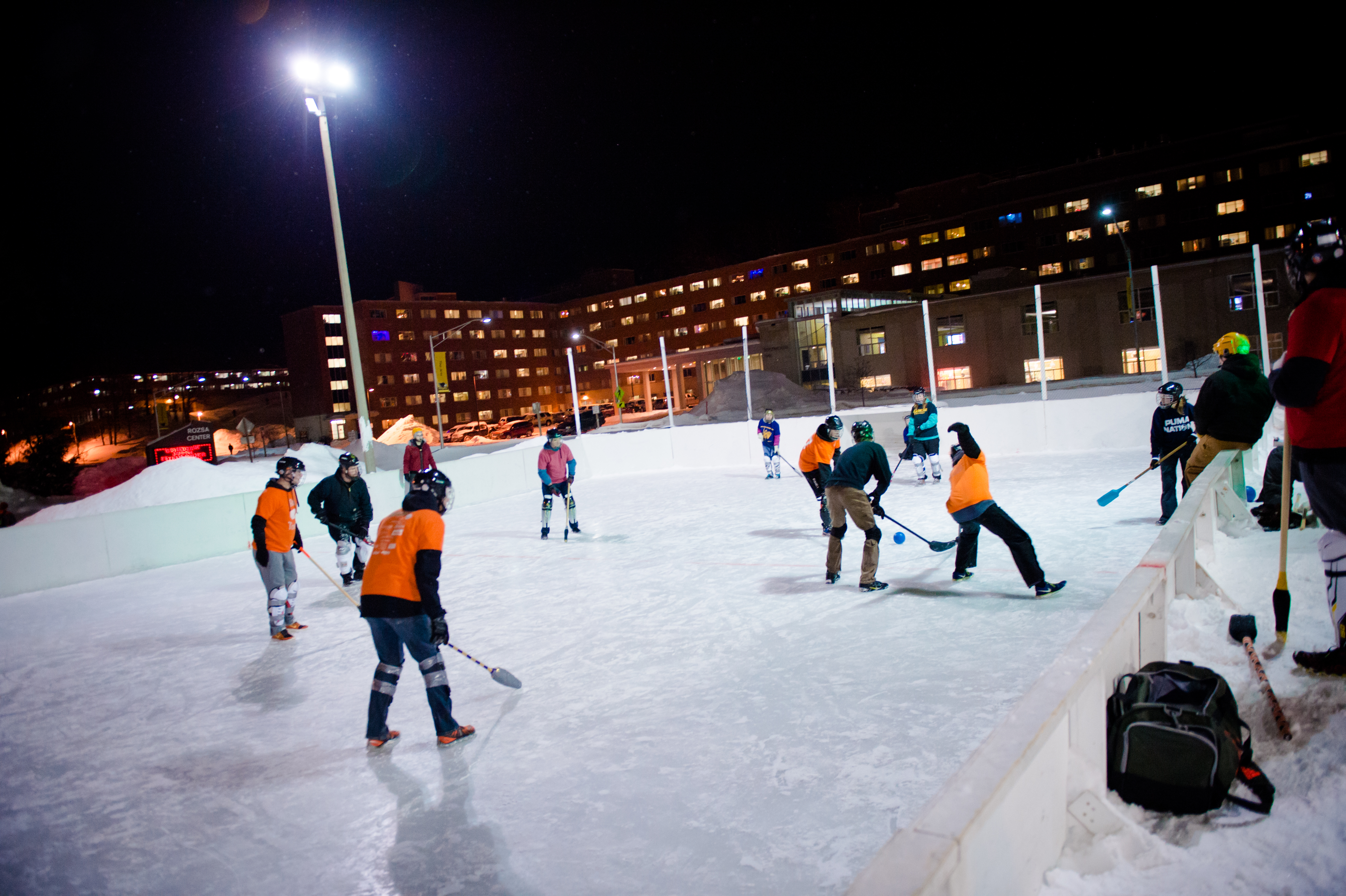 The city of Houghton looked quite different this January compared to most years. Snow banks were nonexistent and you could still see the pavement on the roads at the beginning of the month. El Niño brought unusually warm temperatures and had everyone thinking that they wouldn’t need to plow their driveways anytime soon. Students even returned from Winter Break to weather that was around 10 degrees above average! Winter Carnival was a month away and there was little snow in sight.

The Blue Key Office was flooded with phone calls and emails asking what was going to happen if there wasn’t enough snow. Canceling Winter Carnival was never even considered. Organizations semi-joked that they would rather build sand castles than let the tradition die. Sand castles seemed like a plausible option for a moment since there was an abundance of sand not being used on the roads. This would be the very last resort, aside from canceling Winter Carnival.

The obvious answer to the snow predicament was hauling in snow, but where would the snow come from? Wisconsin? Canada? The snow machines at Mont Ripley? It was also unknown how much snow was needed. It was quickly apparent that hauling in snow was more complicated than putting snow in a truck and driving it to Houghton.

The chosen solution to the dilemma was to anxiously wait and hope Heikki Lunta brought some snow to the city of Houghton. In the meantime, Blue Key asked the surrounding community to donate any clean snow they had in their yards to student organizations working on Month-Long Statues. This system worked for a week, until Houghton got the snowstorm it desperately needed.

The weekend of January 16th, Houghton saw over a foot and a half of snowfall! The pavement was no longer visible and the massive snow banks lined the edge of the roads once more. The city that once worried it would need to modify a long-standing tradition due to lack of snow was relieved once snow finally came.

Over the past few weeks, Houghton has returned to its normal self. Snowplows can be heard at all times of the day (and night). People are finally wearing their heavy winter coats and boots. The Month-Long snow statues are gradually appearing throughout the Michigan Tech campus and community. It looks like Houghton again. I finally feel at home.

The scholarships are part of a Michigan Tech-Portage Health Foundation partnership established to support health-related research and education, jobs and community . . . [ Full Story ]

In December of 2014, Steve Green was set to graduate from Michigan Technological University’s Visual and Performing Arts Department. Armed with a degree in sound design, he knew he had a good job waiting for him just a few weeks and 1,800 miles away. What he didn’t know was that the coming year would not . . . [ Full Story ]

Michigan Technological University, Michigan State University and the University of Michigan have been selected for the National Center of Women and Information Technology (NCWIT) Pacesetters program sponsored by the National Science Foundation (NSF), Google and Qualcomm.  Pacesetters is a 2-year program under which participating institutions develop aggressive and measurable goals for increasing the number of . . . [ Full Story ]

Martin Aksentowitz is earning his master’s degree at Michigan Technological University. And he’s doing it while assessing the health of forests in Colorado.

Aksentowitz is an AmeriCorps VISTA (Volunteers In Service To America) member with the San Isabel Land Protection Trust (SILPT) in Westcliffe, Colorado. When he finishes his AmeriCorps VISTA service with landowners . . . [ Full Story ]

There’s a new way of doing mechanical engineering, and Michigan Technological University is taking steps to make sure that their students come out of school skilled at using the new technology.

HyperWorks® modeling and simulation software developed by Altair, a technology and services company that focuses on business and engineering innovation, is delivering a new . . . [ Full Story ]

February has 29 days this year and to commemorate, the Michigan Tech Annual Fund is holding it’s first-ever Leap Year Challenge, encouraging all alumni from the past 29 years (classes of 1987 through 2015) to participate.

Today’s world runs on code making it incredibly beneficial for all 21st century students to be exposed to it. This project is based on all young students having educational opportunities in programming. Check out this project to learn more about the benefits this will have for the future generations.

Your input is critical in helping to ensure that NCEES leadership and decision makers understand our thoughts and . . . [ Full Story ]

The championship game of the Alumni-Student Broomball Invitational will be streamed live on YouTube, Saturday, February 6 at 3:30 p.m.

You can also catch the all the action from the tournament on the webcams.

For more information on the Broomball tournament, please visit http://www.mtu.edu/alumni/favorites/broomball/

Tech Alum John Scott was an inspiration to many and the embodiment of Husky tenacity. Read about John’s big weekend at the NHL All-Star game in Sports Illustrated, USA Today, and at Michigan Tech’s own athletics page!

MARQUETTE, Mich. — Michigan Tech’s track and field team got its first taste of competition at the Northern Michigan Challenge held indoors at the Superior Dome on Saturday. Huskies athletes won six men’s events and four women’s events on the day.

Men’s wins came in the following events:
Jevon Maddox in the . . . [ Full Story ]

SAULT STE. MARIE, Mich. — A 10-minute scoring drought in the second half doomed Michigan Tech in its 72-56 loss at Lake Superior State today. The game was tied 34-all with 17 minutes to play before LSSU went on a 23-0 run to take control.

Did you learn to downhill or cross-country ski, or snowboard at Tech, or did you come here specifically because you could do those things? What’s your favorite Mont Ripley or Tech Trails memory?

Write us at: Tech Alum

I was a freshmen at Tech in 1965, but did not attend the Julie London WC concert. However, I did attend both the Homecoming and Winter Carnival concerts in 1966 – 1968.
Best regards,

The singer you pictured from the 1965 winter carnival is Julie London. I attended . . . [ Full Story ] 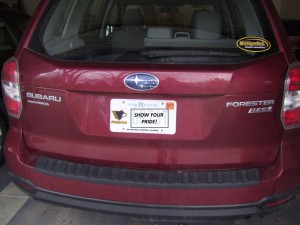 When you purchase a Michigan Tech license plate, not only do you show your Husky Pride, but you also support programs for alumni and students. For an additional fee, your Michigan Tech plate can be personalized.