The best band and fans. 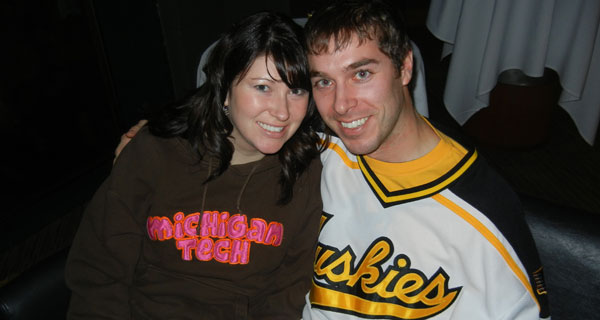 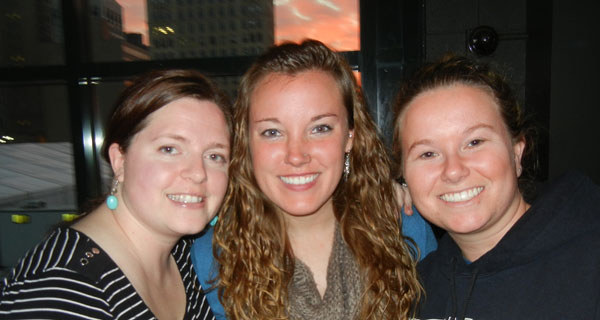 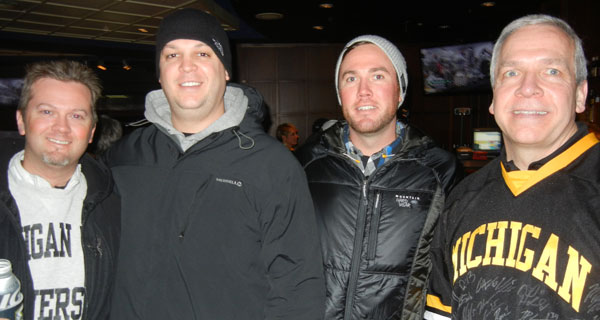 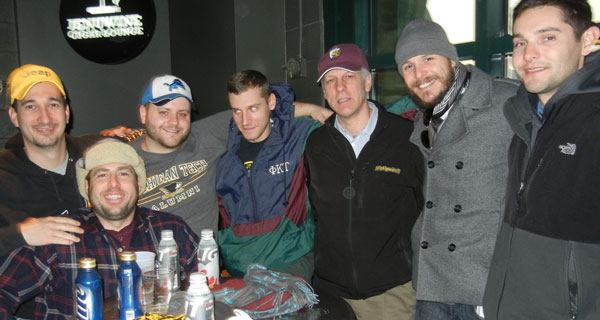 The Phi Taus with leader Marty Schendel '83 (center with hat). 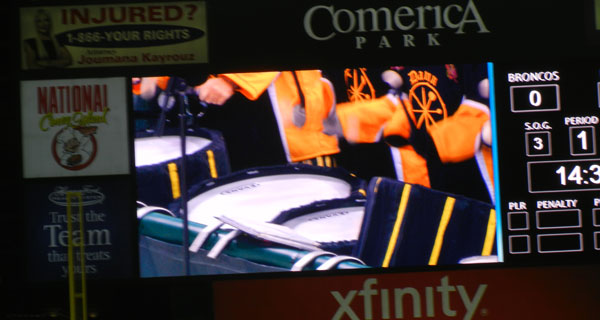 Pep Band on the JumboTron. 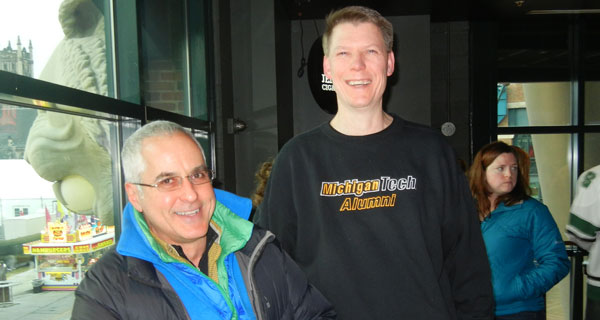 Zack and Samantha Jost. Samantha has already asked mom if she can be a Husky. 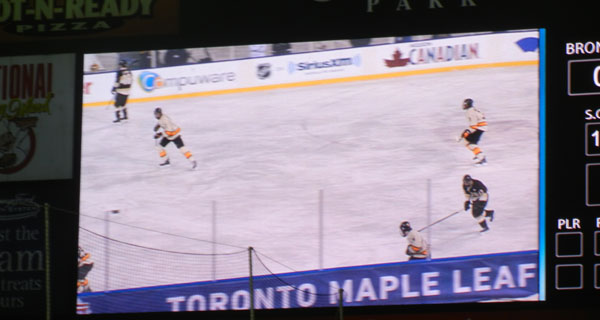 Huskies on the JumboTron.

We were fortunate to receive one more present this holiday season. In downtown Detroit, we were rewarded with a tremendous weekend of alumni events and Huskies hockey. Although Western Michigan won the overtime finale, the effort put forth by the team was tremendous and matched only by the revelry and support of fans, friends, and especially those alums. And it all took place in Comerica Park, which gave it an unprecedented ambience.

Just one break, including a puck that was deflected over the Western goalie but somehow didn’t go in, and we’d be celebrating back-to-back titles. This team has exhibited an intense work ethic all year, routinely out-shooting opponents and often only lacking that one goal to make a difference. Don’t count them out.

The very first Huskies fans I ran into were Pat and Vivian Neville from Woodbridge, Ont., parents of freshman forward Mike Neville. Pat coached all three of their sons in junior hockey.

Our volunteers at the alumni event included Dave Szczesny ’82 who handed out a lot of pickled eggs. Doug ’00 and Kelly ’00 Jost were aided by children Samantha and Zack, who became “pom-pom-ologists,” setting up the gifts for alumni.

Phi Taus were everywhere, it seemed. Ringleader Marty Schendel ’83 metallurgy; was surrounded by a couple of generations: Alan Roberts ’97 ME; Anthony Nowicki ’09 Bio Med ’11 EE; and Mike Braun ’15 Comp Engg. were among the pre-game revelers.

Phil DePetro ’07, ’11 environmental; is the son of a friend of mine from Marquette. He was representing Pep Band alums and won a pizza later on Saturday night, probably because of the “Feed the Band” cheer that was bellowed by the band and Mitch’s Misfits and heard throughout the huge ballpark.

Kelly ’08 Hoober and I chatted about English profs, and her husband, Ben ’08, was a civil. They were down from Dewitt, Mich.

Cindy Fix ’89 and Mark Paparelli were joined by  Louis ’06 ’11 and Lisa Pignotti for Saturday night pre-game. Lisa was a former colleague at Tech, and she and I worked on the old Student Handbook together.

I ran into two more Phi Taus down near the ice. John “The Duke” Vine ’75 civil, was attending his 46th GLI! He was sitting with Bernie Hart ’76 ME, who flew in from Seattle for the event.

I ended up sitting near the Pep Band and Mitch’s Misfits near the end of Saturday’s game. In the 39 degree night, it was pleasant. When the Western mascot Buster Bronco stopped by, he was met with chants of “You turn glue,” and “Why the long face?”

In addition to blowing away the opponents’ bands both nights, the gang kept a constant cheer going, so everyone knew that Michigan Tech was there. With the large number of Tech shirts dotting the ballpark, we were hard to miss.

And although the result wasn’t what we wanted, we made the long ride home Sunday thankful for the opportunity to witness something special: outdoor Huskies hockey in a major league ballpark and the special camaraderie of Huskies fans aged 4 to 74.

Snowfall Update
Unbelievable
I know it’s a lot because the alumni were impressed. Coming back to the snowbanks was shocking.

Again, the Keweenaw County numbers are the best.
And, KRC isn’t bad, either, well ahead of last year.

When it doesn’t show signs of stopping, most of us just mumble a few choice words and get out the snow shovel. Scientists, however, wonder where all that snow is coming from, particularly in pristine places like the Arctic. Raymond Shaw and his colleagues may have found an answer.

It’s common advice: the best way to make a living is to find a way to get paid to do what you love. But few people actually make it to that point.

You know how strong the Husky spirit is. This year, share that spirit with the sports-minded young people in your life by giving the gift of Michigan Tech Sports Camps. 2014 summer sports camps will take place June 7–August 22. The best play, coolest coaches and the most fun you’ll have on the ice, field and . . . [ Full Story ]

On this last day of 2013, we want to remind our alumni and friends that there is still time to make an annual contribution in support of Michigan Tech—and receive a 2013 tax deduction on your federal tax return (if you itemize).

Throughout his career, Tom Irwin has used his Michigan Tech degrees to the utmost. He believes luck is preparation and opportunity and “Mich Tech excelled at the preparation, academically and in a very congenial environment”.As president of Hodgkiss and Douma (H&D) Construction Company of Petoskey, H&D’s emphasis was highway construction, major recreation projects, developments and aggregate . . . [ Full Story ]

Justin Kovacs scored 2:01 into overtime to break a scoreless tie and give Western Michigan the 1-0 victory over Michigan Tech in the Great Lakes Invitational Championship game tonight at Comerica Park. The Broncos’ Lukas Hafner stopped all 33 shots he faced, and Tech’s Pheonix Copley made 30 saves before the game winner trickled . . . [ Full Story ]

Senior Ryan Furne scored a sudden death shootout goal to lift Michigan Tech over Michigan State in the opening game of 49th Great Lakes Invitational played outdoors at Comerica Park today. The Huskies and Spartans finished 65 minutes of play deadlocked at 2-2, but Tech won the shootout 2-1 to advance to the championship. The . . . [ Full Story ]

There have been plenty of reasons to cheer the Huskies on this year. From last-second scores to national titles to amazingly academic athletes, Michigan Tech’s athletics have had a stellar year. Take a look back on the top 10 moments of 2013.

Maybe you recall someone in this December 2006 shot.

Computer science students in a lab with a mysterious pink glow.

Hoping you can recognize someone.

Dennis,
It was my pleasure to talk to you during the GLI championship game at Comerica Park last Saturday. Too bad Tech couldn’t pull that one out. However, it is fun to see them competitive again. Attached is a picture of my Tech slide rule that we discussed. It is mounted in a shadow . . . [ Full Story ]

Hi Dennis,
I just read the story of slide rules, I never had one (forestry ’80) but the early calculators were expensive compared to now. On a slow day during finals week in the library at Mount Marty College we got to talking about snow and well what was winter like where you lived . . . [ Full Story ]

Parinya “Prince” Chakartnarodom ’03 is a faculty member in materials engineering at Kasetsart University in Bangkok,Thailand, his native land. He is working with Michigan Tech to develop an internship program for Kasetsart students at Michigan Tech.

Prince is also working closely with Tech’s Graduate School on potential collaborations between his university and Michigan Tech. For . . . [ Full Story ]

Dennis,
Attached are some “Blizzard T. Husky” photos from 1977-1979. I think this is the “wolf” period you referred to.
My recollection was that poor Blizzard was always heckled at the hockey games with calls from the Toots to “SHOOT THE DOG!”.

Alum Brad Isaacson ’11 was on the sidelines for the Auburn-Alabama miracle finish, and he’s going to the national championship game in Pasadena.

An appropriate cartoon for MTU Toots.

I would  like to take this opportunity to express my sincere appreciation for the fine work you do with preparation of the TechAlum Newsletter. The new format is awesome! While I have looked forward to receiving your e-newsletter for many years, I seemingly find it even more enjoyable now that my daughter Amy Joy is . . . [ Full Story ]

Whether you purchase a regular plate or collector plate, a portion of the purchase fee is given to the university.