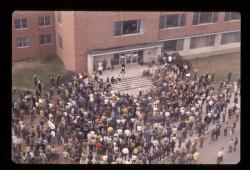 I not only remember this—I was the chairman of the committee that organized what I believe was the only student strike in Tech history. There are more pix (but no real narrative) in the 1972 Keweenawan.

And the time frame was late April or early May 1972, not 1969 or 1970. You can tell by the construction work in the background on the mall—the sidewalks and landscaping—which was not started until the MechEng building was completed.

The protest was directed at a renewed bombing campaign against North Vietnam and it was part of a wave of anti-war campus protests before the 1972 election.

The two people I recognize for certain are Jim West and Dave Shangle—my Phi Kappa Theta fraternity brothers. I also see a "KLF" t-shirt down in front, which stood for Keweenaw Liberation Front. The KLF was, as I recall, more of an environmental activist group but they were certainly opposed to the Vietnam War; I think Kerry Irons, one of the key people in the KLF movement, is in the picture down in the lower left corner.

The entire story is complicated, and even today, controversial to some. As the US was withdrawing troops in early 1972, the North attacked the South army, and was on the verge of routing the South army, which retreated in panic and disorganization. American bombing beat back the North army, but then more bombing (probably the most intense of the entire war), including civilian targets in the North (like water supply systems), started.

Many people in the US were upset, and, even though the Kent State incident had slowed student protest, more protests broke out—for me, the military events in Vietnam suggested that the South could never defend itself, and that the people of the South weren't willing to die to defend their freedom. At that point, close to 50,000 Americans had been killed in the war. Support for the war had decreased to a low point; President Nixon had said he would end the war with a secret plan, GI's were coming home, and now this renewed failure of the South army suggested that we might never leave Vietnam.

When protests started on other campuses, more than a hundred angry students called on the Student Council to become involved. A special meeting of was held in the lecture hall in the Civil Engineering building, and the room was packed. Tempers were running high; some of those present were advocating protest actions that could easily become violent. As president of the senior class, and a member of the Council, I was asked to organize some meaningful form of protest, and we eventually settled on a rally and teach-in—or symposia about the war. Most classes were cancelled; it was effectively a one-day student strike.

The picture is from the rally, which was held on the steps of the Union. Lectures followed; there were no confrontational incidents as far as I know.

My personal feelings weren't completely ideological; I primarily acted because I believed our guys were dying for nothing. And I can also tell you that Ray Smith, the University President at that time, spoke with me at commencement in June. If he was in anyway disappointed or angry about the protest, he never said so to me. He treated me with respect and warmth when we talked. My guess is that he was relieved that the day passed in a very orderly and polite fashion. It's easy to forget that the architecture of the Admin Building was reputed to have been a result of concerns about student-driven political violence—the small windows, the constricted entrance way, no grand lobby area—few people remember that administration buildings across the country were occupied by student protesters for days at a time on some campuses.

Finally, I think it's important to note for the record that I enlisted in the Army in August—after getting my degree—and served my two years and got an honorable discharge.
Mike Anleitner ’72