I remember riding a Homecoming float in 1960. I was the King Hobo that year and won a $20 prize and a small trophy. I think that was the first year for the hobo contest. I still have the trophy in my home office. It’s a brass garbage can on a wooden pedestal. The engraving says, “King Hobo, 1960, MCM&T, Homecoming.”

I did not get to ride on a float, but I did march in the parade as part of the AFROTC Cadet Corps. We were all in our uniforms marching down College Ave., and the students yelled that we were out of step. I am not sure if we were or they were trying to fake us out. We were not the best marchers, but at least we participated in the parade. 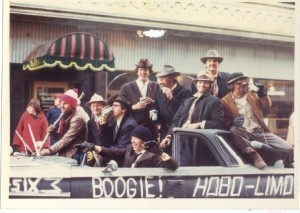 We did hobo cars for a couple of years in the late ’70s. In those days, the parade started at the north end of the lift bridge, and went the “wrong way” through downtown Houghton. (Maybe it still does?)

This picture, circa 1978 and taken in front of the Dog House on Shelden Ave, shows one of them. I don’t remember the hitchhiker in the red-and-white chuke. The rest of us are Mark Coburn, Dave Schultz, Bill Schap (driving), Dave Saylor, Jim Stickland, Dale Mellerowicz, Doug Blasius, and John Berry. Cigars and Busch!
Mark Coburn ’80

I was selected the homecoming king (or was it the queen?) in 1980. I dressed like Frankenfurter from the Rocky Horror Picture show. I got up on stage at the old ice arena down near the Portage (no longer exists and I can’t remember the name), sang the song, “Sweet Transvestite,” and proceeded to get fairly stupid. Can’t believe I am sharing this memory.

I never got a photo of that infamous night . . . if anyone out there has a photo, I would appreciate it—you know who you are, Cindy M. I will put it next to the trophy I still have in my possession. Thanks.