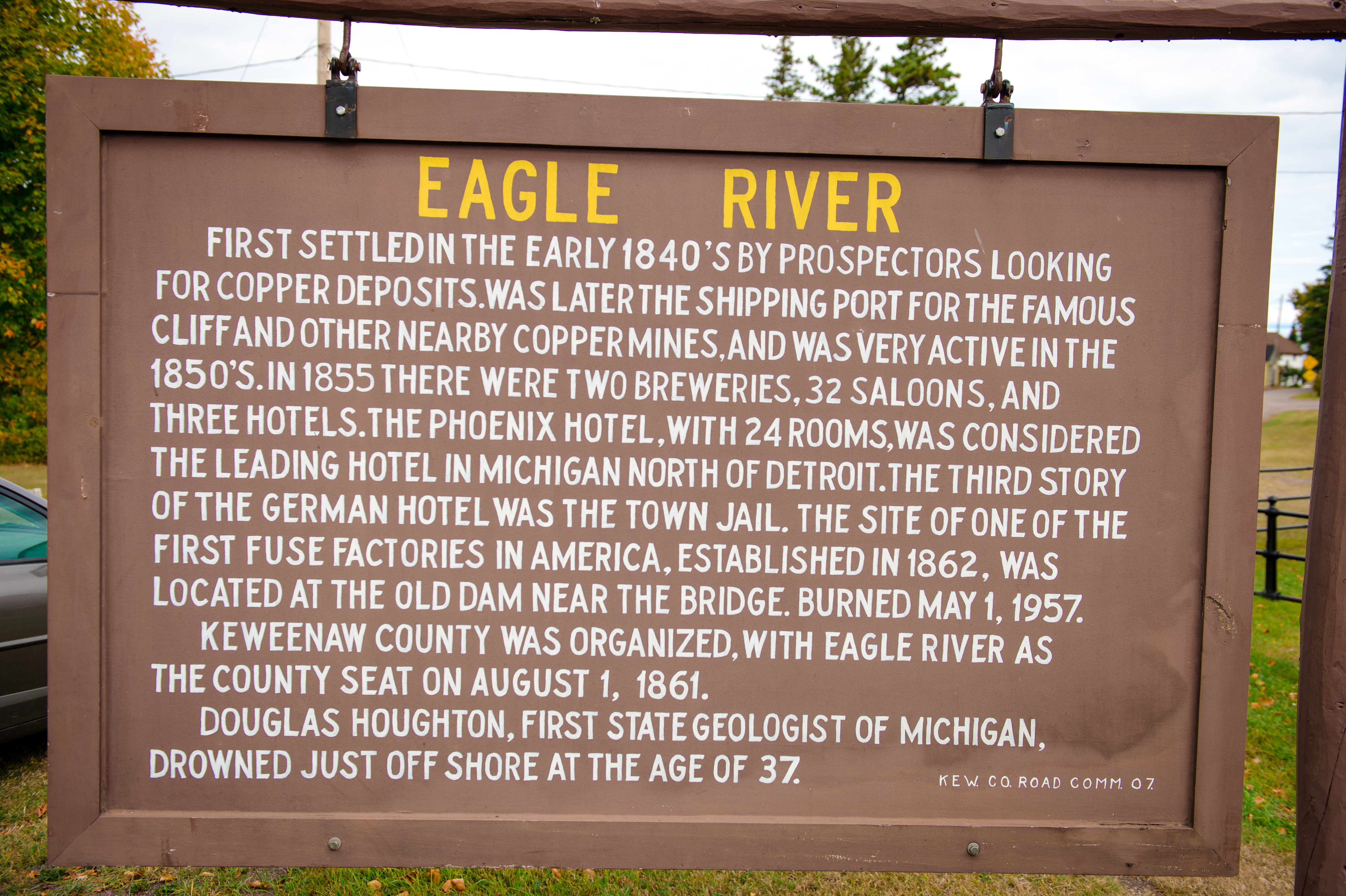 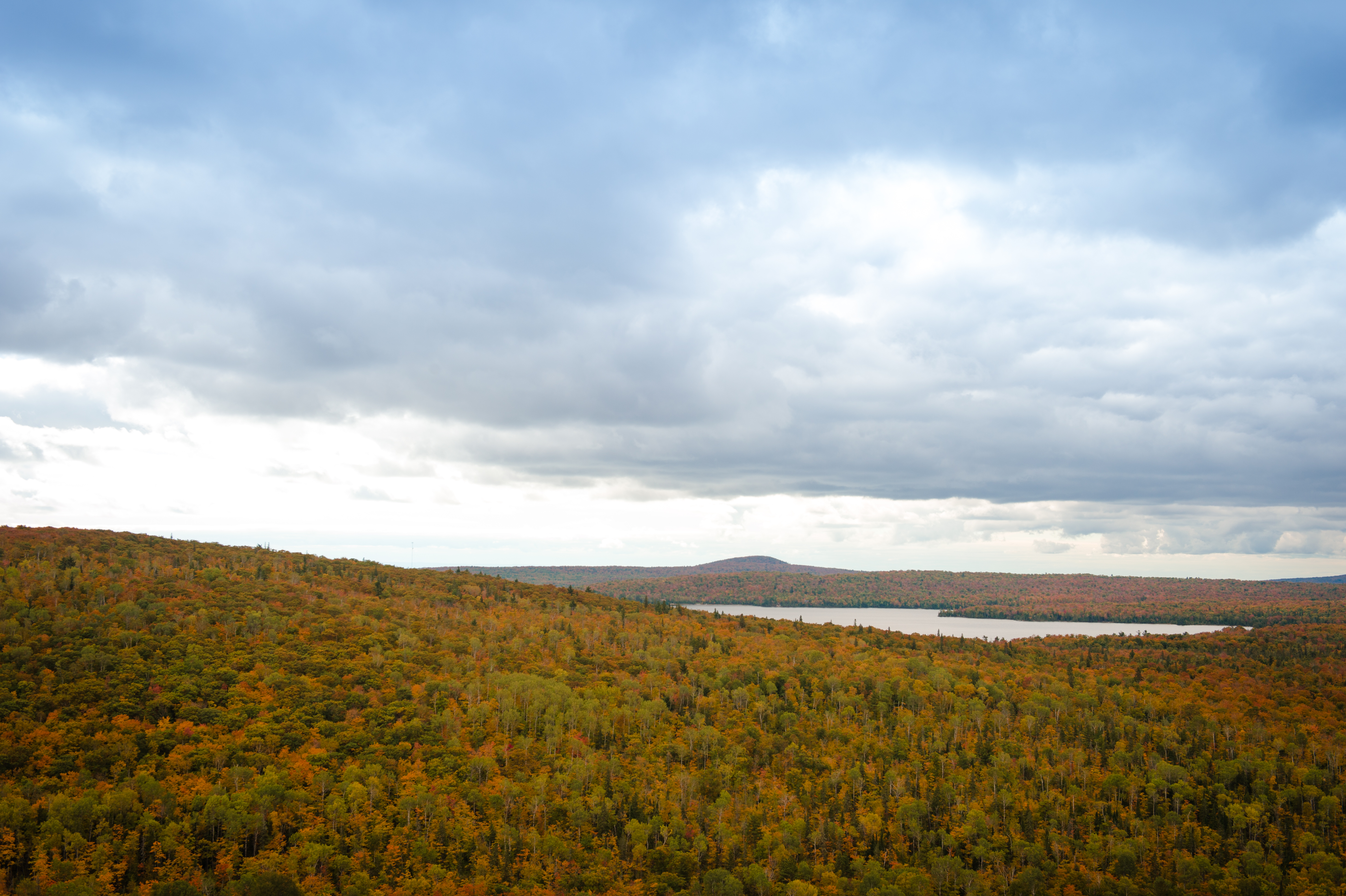 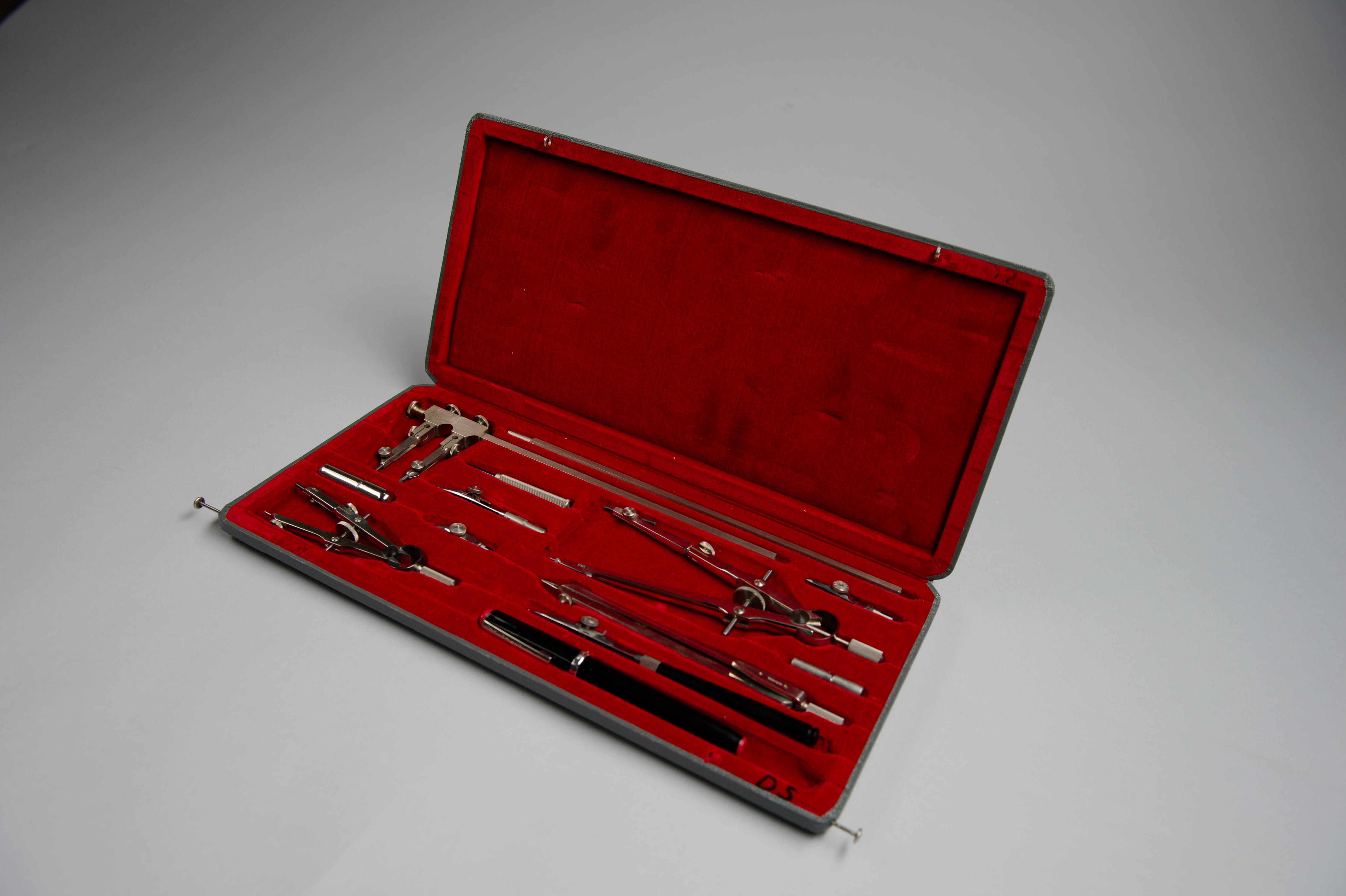 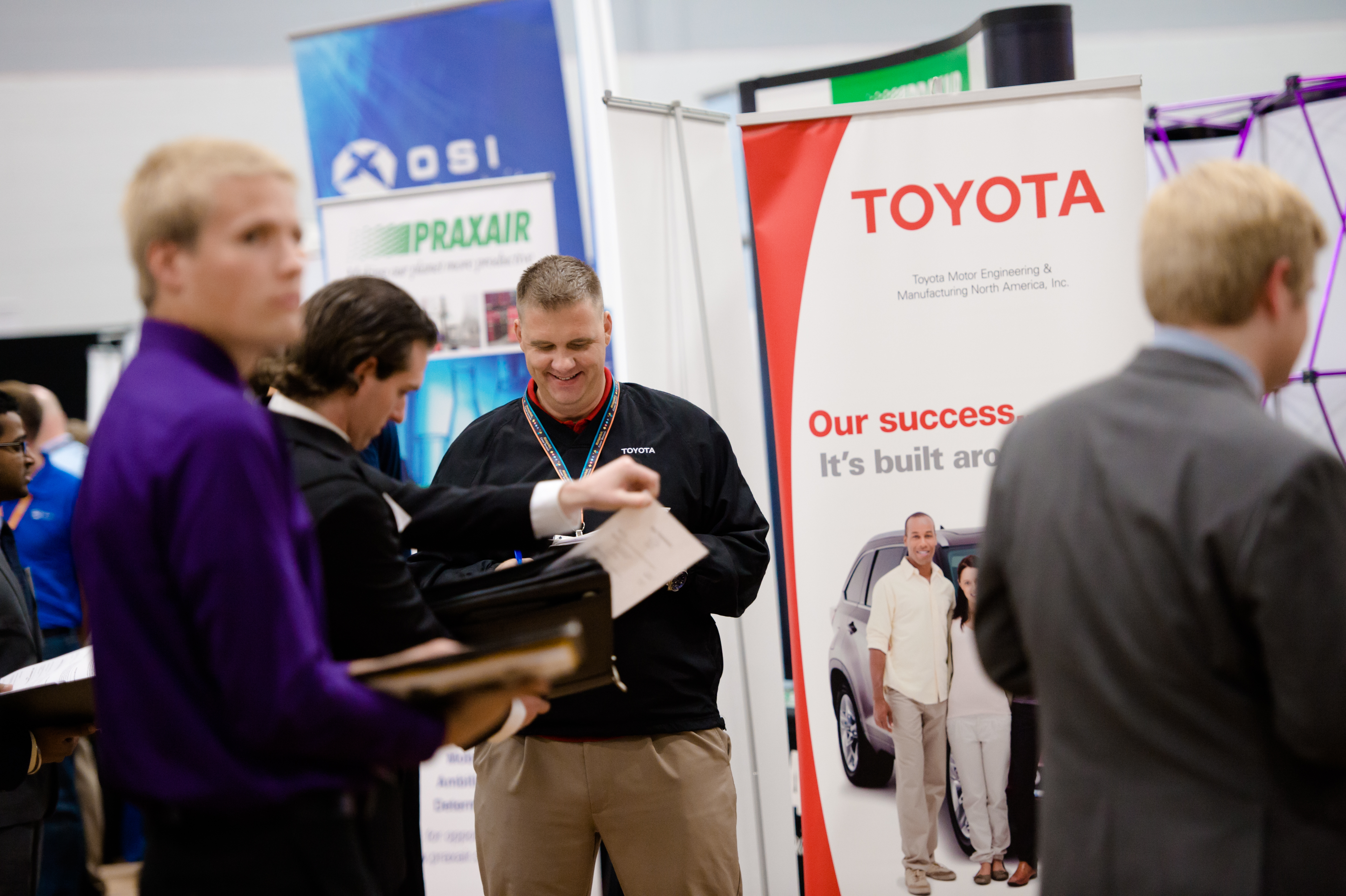 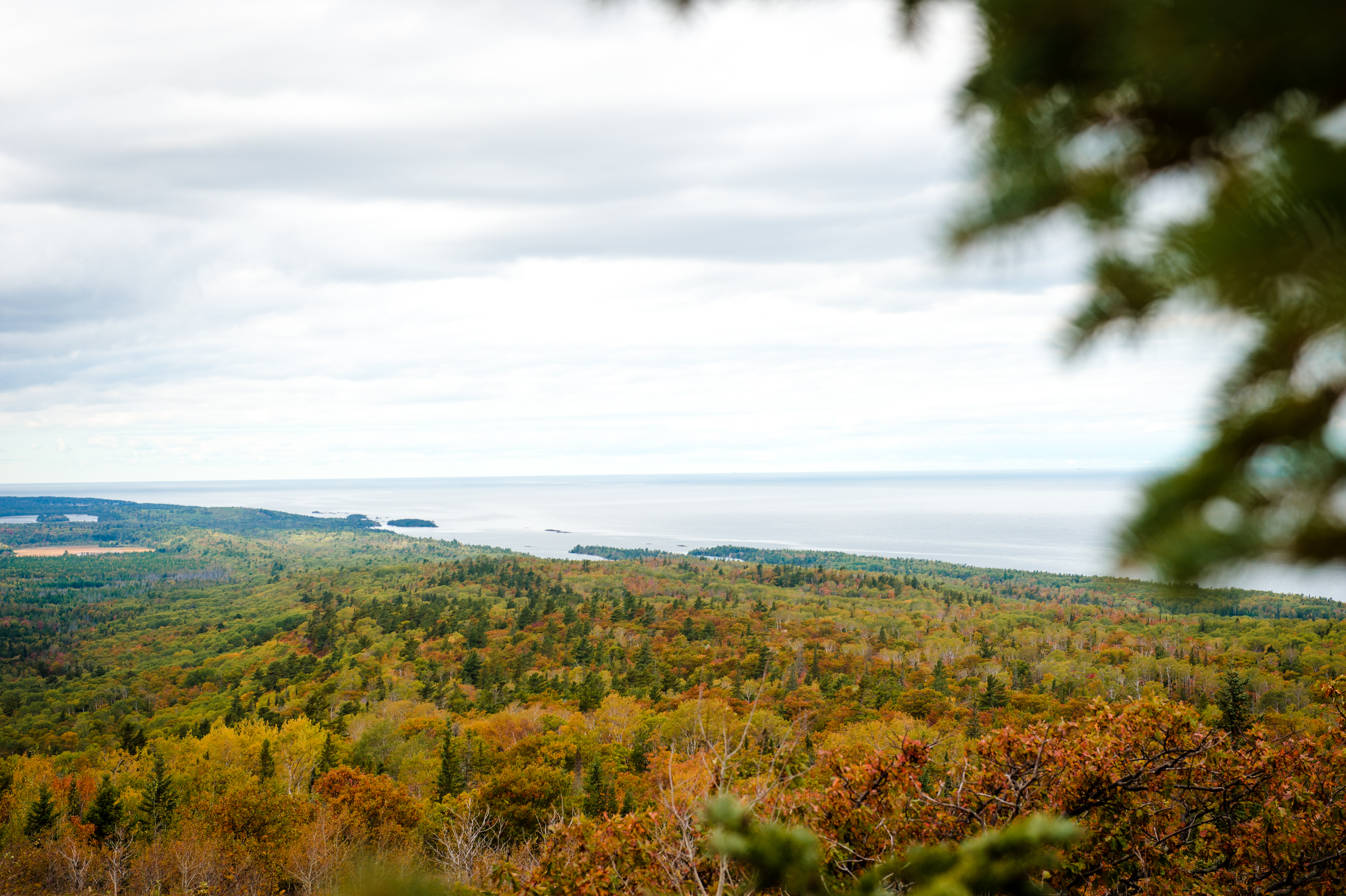 Many of you will already have images of the SDC in your head if I mention Career Fair to you. The semi-annual festival of resumes just about packs the buildings, with 371 employers attending last week. I think the number is something like 70% of the recruiters are you, our alumni.

I’m teaching two first-year classes this semester, and I encouraged my students to go. Even if they aren’t thinking of getting an internship next summer. Even if they aren’t sure what they want to do in the future. It’s always good to go and see what you’re up against, to know what the space looks like. Whenever you can limit the unknowns in something like this that matters, that’s important.

Our placement rate continues to be in the 90%+ range, and the average starting salary has crept over the sixty-thousand dollar mark. When my students explain to me the things they’re studying, there’s a lot of it I don’t understand, but those numbers show that the marketplace is demanding those skills, that knowledge and experience.

But I also ask my students what matters to them. And what they want to do that will matter. We are so often remembered by the best things we did and how we treated the people around us while doing those things.

And that, unsurprisingly, brings me back to Justin Fitch.

Justin walked the same sidewalks as us, was in the same buildings, had the same classes. He chose his career path, too, serving in the armed forces. Most will remember his story—the cover story for the last magazine—on working to help prevent veteran suicides. And he did all of this work with stage 4 cancer chasing him. If we’re remembered by the things we do that matter, I know I would be lucky in however many years I have in my life to make a fraction of the difference he has.

I remember most our phone interview as he was going from Boston to Wisconsin, his phone and the mobile networks of central Pennsylvania not getting along. And it was the work that mattered, the fundraising, the healing. He was very upfront that people tend to listen to someone like him, someone who is staring down long odds and has limited time. He was happy to use that soap box to further his cause.

Justin was given the Humanitarian Award at this year’s ceremony during Alumni Reunion. No, not given. He more than earned it. He packed more into his time than many of us will be able to pack into ours.

I’m not really a religious person, but I do believe in a very abstract form of reincarnation: the best parts of ourselves, the ways we best treated each other, and the good that we’ve done, that lives on in the other lives we have the good fortune to touch. It’s that positivity that, one act of kindness and compassion at a time, makes the world a better place. And I know a lot of Justin and his work will live on in us.

The main fundraising vehicle for Active Heroes, the non-profit Justin worked with to raise funds for a retreat center for veterans and their families, was a series of ruck marches under the umbrella of Carry the Fallen, a kind of long walk with a massively heavy pack on your back. It’s symbolic of the burden veterans with depression and suicide issues face, and it’s a powerful reminder that we need to not just remember but help these people with their pain. Because their stories, their acts of kindness, they should not be lost.

Thanks, Justin, for the work you did all the way to the end. I hope you always knew how much of a difference your one voice made, how many of us stood up and took notice. We’ll carry the load from here. Thank you, my friend.

Watching the clouds go by, swirls of white puff up and melt away. The changes mirror mixing within the clouds as drier air mingles with water-saturated air. New research led by Michigan Technological University with support from the National Center for Atmospheric Research (NCAR) and the Max Planck Institute for Chemistry, Mainz University, analyzes this mixing . . . [ Full Story ]

His theory has just proven true. A two-million dollar donation to Michigan Tech’s Department of Physics will help establish The Elizabeth and Richard Henes Center for Quantum Phenomena . . . [ Full Story ]

Dust specks are touted for their insignificance. But black carbon particles have global impact. Michigan Technological University researchers collaborated with a team from the Los Alamos National Laboratory and several other universities to shed light on the complex way black carbon and solar radiation interact to increase warming in the atmosphere. The research came out . . . [ Full Story ]

MicroRNA strands were once thought of as junk genetic material. Now, researchers know that these small structures help program surrounding genes, affecting everything from eye color to cancer. For diabetes, one such connection is a classic whodunit—it was miR-483 with the SOCS3 protein in the pancreas. Unraveling this mystery is the subject of a new . . . [ Full Story ]

A treasure from deep inside the earth has come to Michigan Tech.  Boulders of unique Nickel-copper sulfide rock with platinum and other rare elements—from the Eagle Mine north of Marquette—are now on public display in the lobby of the Dow Environmental Sciences and Engineering Building.

There are three boulders in the exhibit. The largest weighs . . . [ Full Story ]

This year marks our 3rd anniversary and we are still excited to be bringing research and public service projects to life. So excited that on our anniversary, October 11th, we will be matching your donations given on the site. We will match donations up to five hundred dollars per project and up to five thousand dollars total on . . . [ Full Story ]

The Michigan Tech, NMU, and LSSU Alumni Associations present: Yooper Night at the Joe on November 8, 2015! Time to pull out your Yooper attire and meet up with your fellow alumni and friends from the UP at the Punch Bowl Social in Detroit and swap stories about your time up north—then head over the Joe . . . [ Full Story ]

Michigan Tech is pleased to launch a new giving form for those wishing to make an online gift to the University.

Staff members worked on the redesign with the following goals in mind: make it easier to navigate; provide donors with more options for making a gift (multiple payments, recurring/ongoing, etc.); and allow donors to . . . [ Full Story ]

Hold on Tight to Your DreamsJohn Drake did that for the duration of his career – what he calls a "forty-four-year run." The ensuing success has put him and his wife, Cathi, in the position of being philanthropists.Through their estate, they have provided for the John and Cathi Drake Endowed Professorship in Mechanical Engineering at . . . [ Full Story ]

Tech controlled the first half and outshot the Pioneers 15-1 before Herrewig put the Huskies on the board in the 43rd minute. AfterJenelle Riedl beat a defender at the right edge of the box, she crossed it to Herrewig who knocked the ball past the Malonegoalkeeper for a 1-0 Tech lead.

HILLSDALE, Mich. – Stephanie Dietrich had a game-high 13 kills and hit .522 and teammate Jacqueline Aird had 13 digs, but the Michigan Tech volleyball team was knocked off by Hillsdale, 3-0, in a GLIAC conference volleyball match today (Oct. 3)

COLFAX, Wis. – The Michigan Tech cross country teams competed at the UW-Eau Claire BluGold Invitational today (Oct. 2) at the Whitetail Gold Course. The Tech men’s team finished seventh out of 19 teams, while the women placed fifth in the 17-team field.

HOUGHTON, Mich. — Michigan Tech is ranked No. 14 in the D2Football.com poll and No. 18 in the American Football Coaches Association poll this week. The Huskies own a 4-0 record on the season.

HOUGHTON, Mich. – The second of the two major NCAA Division I college hockey polls was released today (Oct. 5) and for the second week in a row the Michigan Tech hockey team has earned a spot in the national preseason rankings.

College is a place of learning, a place of growth. But it’s also an inherently social place, with contacts being built up and issue thought through thanks to the unique assembly of so many people in such a small space.

I was a freshman living in East Wadsworth Hall in 1970. During the year, at least one guy on fourth floor, where I lived, got a waterbed for his room. It was a very early model. Essentially a big, thick plastic bag; no baffles, no frame and no heater. I seem to remember . . . [ Full Story ]

Great article on the sunset and cycles of life. Very touching. Thanks.

Thanks, Kip. It was a hard article to write, especially with the death of a colleague sharing the column. We’ve just turned past that point where warm temperatures have a hope of coming back. There has been the bit of . . . [ Full Story ]

Hi Kevin Thanks for your kind comment, however I must apologize for not fact-checking my letter to you referring to the first high rise as Chem-Met building. It was in fact the Mechanical Engineering-Engineering Mechanics (ME-EM) building that replaced historic and beloved Hubbell Hall. Called Pillsbury towers or some such by students it was later . . . [ Full Story ]

You can help the next generation of Huskies receive a Michigan Tech education.

Simply get a free quote on Liberty Mutual Auto, Home, or Renters Insurance between September 1, 2015 and November 30, 2015, and we will donate five dollars to the Traditions of Giving Scholarship Fund.1

You, too, can benefit! Liberty Mutual has partnered with your alumni association to provide you exclusive savings up to 7.96 on quality insurance coverage2. We offer benefits such as:

Visit Liberty Mutual or call 855-323-2150 for a free, no-obligation quote and we’ll contribute to your school’s scholarship fund.
I just switched to Liberty Mutual for our family’s home and auto, and reduced our annual price tag by a little over five hundred dollars. The request was handled by a local agent, who was patient enough with me as I made sure the coverage was identical to my last package. I’d encourage you to check it out! –Jeff ’97

1 No purchase of a policy is required. Limit one quote per policy type per person. Not available to residents in in CT, FL, IA, MA, ME, MO, ND, NM, or PA; or to existing Liberty Mutual Insurance customers.
2 Discounts and savings are available where state laws and regulations allow, and may vary by state. To the extent permitted by law, applicants are individually underwritten; not all applicants may qualify. Figure reflects average national savings for customers who switched to Liberty Mutual’s group auto and home program. Based on data collected between 9/1/2012 and 8/31/2013. Individual premiums and savings will vary.Coverage provided and underwritten by Liberty Mutual Insurance Company and its affiliates, 175 Berkeley Street, Boston, MA. © 2015 Liberty Mutual Insurance