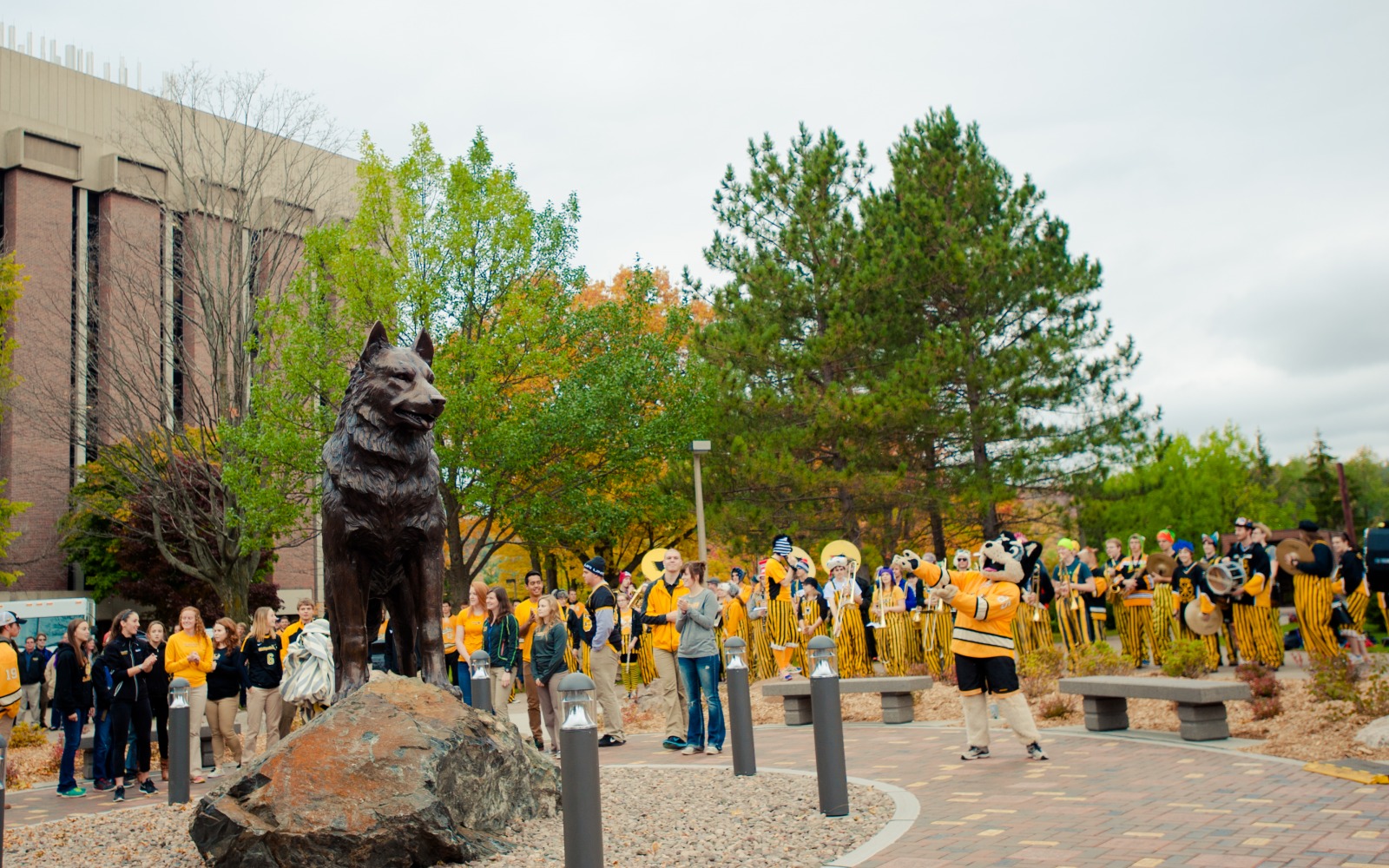 A year of planning, 823 personalized engraved pavers, and 1,600 pounds of bronze: it all led to the creation of Huskies Plaza, a grand new gathering space for Michigan Tech students, alumni, families, and friends. 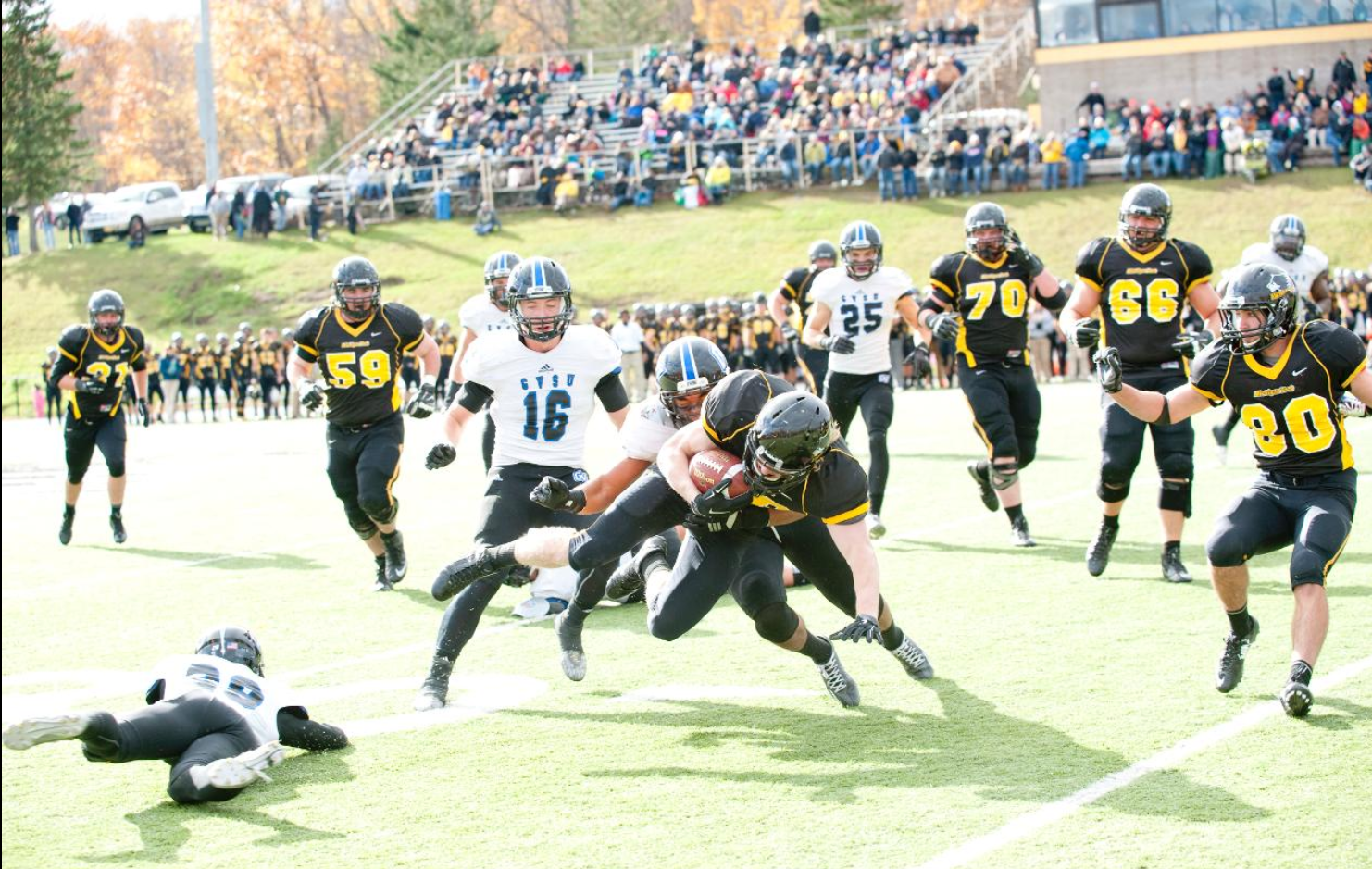 Michigan Tech opened the game against Grand Valley State with 35 unanswered points and went on to a 35-14 victory over the Lakers to improve to 6-0 on the season.

I am on medical leave for a while. I will miss you all, but a group of stellar Michigan Tech personalities have stepped up to write guest columns while I am away.  Today, Director of Athletics Suzanne Sanregret shares how you can follow the Huskies online. —Dennis

Michigan Tech fans can follow the Huskies in high definition via Internet video streaming—no matter where in the world you call home. Michigan Tech Athletics was a national leader in offering streaming video of live events to fans more than a decade ago, and the service has continually evolved over the years.

The production quality has come a long way since Michigan Tech began video streaming with one camera in standard definition in 2003.

“We’ve invested heavily in our video production so that people around the world can keep in touch with the Huskies,” said athletic director Suzanne Sanregret. “Having a high-quality production of our events benefits not only alumni, but fans and families of our student-athletes.”

Tech’s video production took a huge jump prior to the 2013-14 season when it installed a four-sided video board in the John MacInnes Student Ice Arena. New cameras and a dedicated production room in the ice arena were part of the project. Connecting the SDC Gym and Sherman Field to the production room through fiber optic cable allowed the facility to be used for all sports.

Michigan Tech streams are available on two different platforms. Hockey is available through a league-wide initiative at WCHA.TV. Daily, month-long, or annual subscriptions are available and include access to all league games for that time period. All other streamed sports are available at HuskiesLive.mtu.edu. Fans can follow their team with a single-game or season package or get all Tech events with an all-access pass.

When Governor Rick Snyder proclaimed October STEM (science, technology, engineering and math) Careers Month, the Michigan STEM Partnership challenged employers across the state to do just one thing to promote understanding of the many career opportunities in STEM fields and the education required by those jobs.

The projects, posted by the Center for Pre-College Outreach, enable anyone to help support two of Michigan . . . [ Full Story ]

3D printing guru Joshua Pearce wants nothing more than to provide the means of production to everyone, especially people in developing regions who must get by on very little. But there has been a drawback.

3D printers make all manner of fun and useful things, but they do require electricity. And the grid is notoriously . . . [ Full Story ]

The campus community is invited to a dedication ceremony for the newly installed memorial wall which recognizes Michigan Tech alumni and those who attended but did not graduate, who gave their lives in Vietnam and in more recent conflicts.

The Outdoor Nation Challenge continues and Tech is currently in second place. It’s a great season to get outdoors, and all outdoor activities can be counted! If you have not registered yet, it’s not too late – the contest runs until November 22

The boulder was placed. Engraved pavers were set. Lighting and landscaping were installed. And now, the hallmark centerpiece of the new Huskies Plaza—the Husky Statue—is in place.

After a year of planning, Huskies Plaza was officially dedicated on Monday, October 13 with nearly 1,000 people in attendance. Students are already enjoying the space, which is . . . [ Full Story ]

Bob is currently the Owner and President of a company called Shaft and Tunnel Engineering Services, operating out of Holland Landing, Ontario. In addition to his B.S. in Geological Engineering which he received from Michigan Tech in 1964, Bob earned a graduate diploma from the Haileybury School of Mines in Haileybury, Ontario.After leaving Michigan Tech, . . . [ Full Story ]

Michigan Tech opened the game against Grand Valley State with 35 unanswered points and went on to a 35-14 victory over the Lakers to improve to 6-0 on the season. Charlie Leffingwell rushed for 202 yards on 23 carries and scored two touchdowns, and Tyler Scarlett completed 15-of-22 passes for 174 yards.

Mark Maroste has been added to the Michigan Tech hockey staff as a volunteer assistant coach for 2014-15 season. Maroste played for the Huskies from 1981-85, and served as an assistant coach from 2001-04.

“We’re thrilled to have a coach of Mark’s caliber join our program,” head coach Mel Pearson said. “He brings a wealth . . . [ Full Story ]

We had our first flurries already, but they only lasted a minute and melted right away. Remember your first Keweenaw snow sighting? Let us know.

Halls theme and decorate their hallways for Halloween—then invite the community for tours—in one of Tech’s newer traditions: Safehouse. Did you ever participate? Send us an email.

While the Huskies were defeating Grand Valley in football Saturday, the alumni team from Disco Tech Ultimate Club was defeating the current players up at the soccer fields.

Can you identify any of these veterans?
John Walikainen ’11

While reading the August 12 edition, there was a picture of Wadsworth Hall 1958 that led me to check my Keweenawan yearbook. Upon opening the book, out fluttered this photo. Alas, my memory failed me and I couldn’t remember all the names; personalities and stories yes, but names no. I’ll always remember Tony Vacca, who . . . [ Full Story ]

I’ll soon be one of Michigan Tech’s “alumni around the world.” My husband and I are on a 9-month trip this year, traveling across the country; starting in January, we’re going to Hong Kong, Australia/New Zealand, Abu Dhabi, Greece, and France.

While I’m doing this I’m working as a freelancer, using skills I developed at . . . [ Full Story ]

My favorite hike to see color is through the Trap Hills, which are southeast of the Porcupine Mountains in the Western U.P. From M-64 east, you can hike the North Country Trail to vistas from the highest cliffs in the state of Michigan! You can see forever and not see any sign of civilization.

Reading the piece about Hubbell Hall got me wondering. What was the name of the building that was used as the forestry building back in the mid sixties? It was off campus, toward Houghton, and I can remember having to literally run to make it to class. A real experience . . . [ Full Story ]

Google was on Mackinac Island just recently. Click on the dots on the map for more photos. Not many people or horses.

I was the hobo queen in 1965. Michigan Tech photographer Harley Strauss took my picture. I had long hair, braided, with wire in the braids to make them curve out. What fun I had!

Take advantage of a “yourname@mtu.edu” email service (powered by Google) provided by your Alumni Association in cooperation with Michigan Tech’s Information Technology Services.

Sign up for your alumni email account today through the HuskyLink online community. If you are not already a member, visit www.huskylink.mtu.edu/join for details on how to join.

Once you have set up your “@mtu.edu” email account, you can access your email on the web from anywhere by visiting huskymail.mtu.edu.

Students are welcome to continue using their “@mtu.edu” email account after graduation.