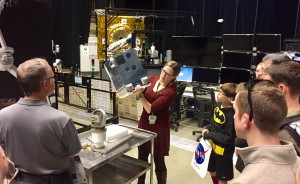 In the Satellite Servicing Projects Division’s Robotics Operations Center, Joyln Russell ’98 discussed Raven, a Technology Demonstration Mission that launched on February 19 to the International Space Station.
Pat Kilroy ’83 brought the group to their largest clean room to check out the James Webb Space Telescope (JWST) hardware. JWST will launch next year to replace the Hubble Space Telescope (HST), but instead of being in Low Earth Orbit like HST is now, JWST will be a million miles away in the “L2” Sun-Earth Lagrange point.
The group also took a trip four miles up the road to check out the Goddard Geophyscial & Astronomical Observatory (GGAO) with Larry Hilliard ’83. The GGAO is the home of pioneering research in many scientific areas. Scientific application of lasers, astronomy, and solar physics, are just a few examples.
Many thanks to hosts, Larry Hilliard ’83, Jolyn Russell ’98, and Pat Kilroy ’83 at the Goddard Space Flight center who made this event possible.
For more event photos visit the Washington D.C./Baltimore Chapter on Facebook.