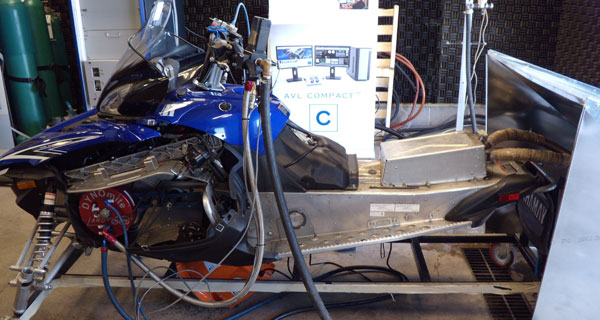 The test sled to set up the diagnostics. 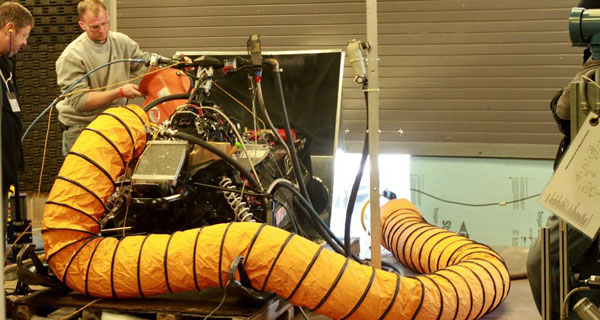 The numbers during an emissions test. 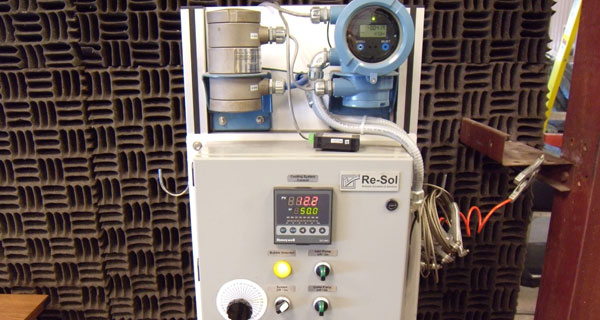 This measures the fuel used in the lab emissions test. 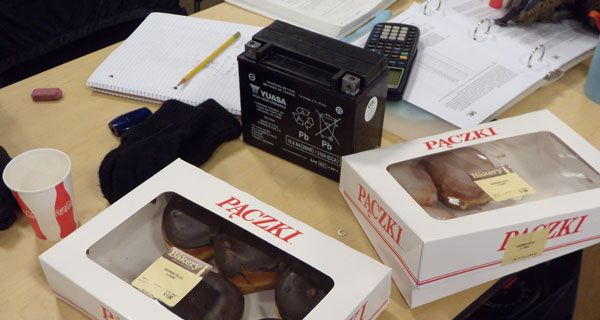 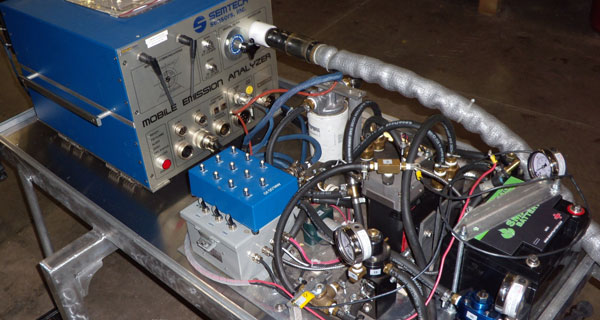 The equipment for the outdoor testing, built by Tech. 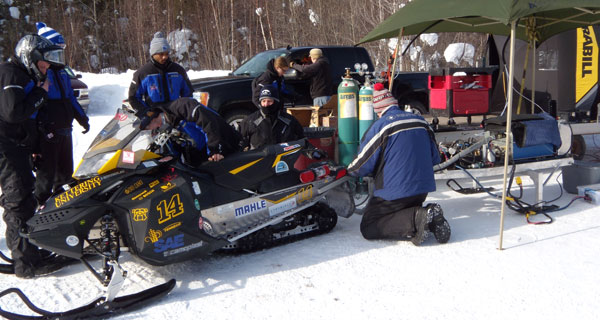 Hooking up the sled and the emissions equipment. 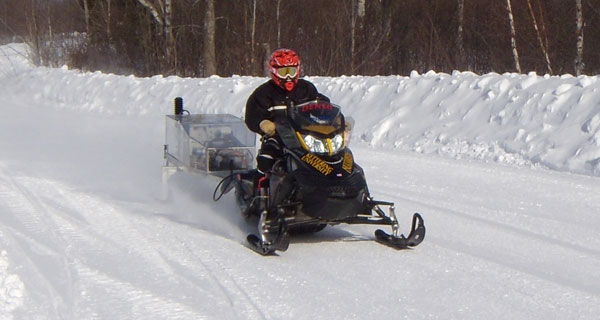 Scott Miers drives the sled for the outdoors emissions testing. 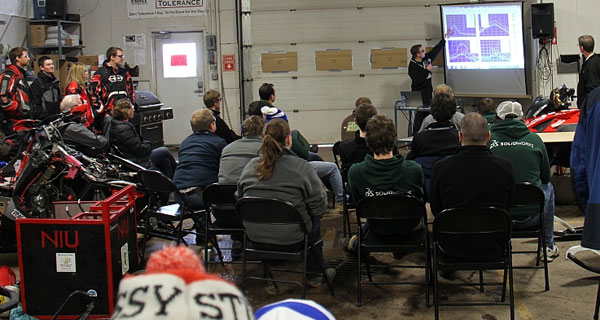 Teams getting briefed on their emissions results.

One important part of the Clean Snowmobile Challenge that we host each year is the emissions testing. The Michigan Tech team, as well as the others, has to make sure their sled is performing within certain standards.

It’s important to the competition, accounting for more than 20 percent of the total score.

“The lab simulates the trail riding of the sleds, and we also supply the equipment that measures emissions right from the tailpipe,” Chmielewski says. “We test sleds throughout the week, once they complete the endurance run.”

It’s the fifth year Chmielewski has been involved, and he appreciates the interactions with students.

“We can expose them to type of equipment they might be working on,” he says. “And we want to know what they think of our equipment.”

He’s seen improvements in lowering emissions over the years, too.

“In just a few years, it’s been significant,” he says. “They routinely do well with the testing.”

During the week, Chmielewski was busy setting up the lab and fitting a test sled with an exhaust hood out the back and two important features up front.

It has a water-break dyno and throttle actuator to simulate on-trail conditions,” he says. “We control it all through software and designate discrete points to ramp up and down to. The test we are running this year is optional for the EPA regulations, but we want to challenge the teams to hit them.”

Changing fuels have been a challenge for the teams, too. The ethanol blend has given way to isobutanol this year, which will be easier to calibrate for, Chmielewski said. And ethanol could have troubles in cold weather, whereas iso-butanol does not.

The whole test set-up is pretty impressive. It’s a long way from where they were.

“Would you believe we used to have to stand next to it with a laptop and control the dyno and the throttle all at the same time?” he says.

A couple of days later, teams of students were huddled around their machines in the main garage. We caught up with the Kettering University team that was prepping their fuel lines for the in-service emissions event. At one point, they used a cellphone light to illuminate their work.

On the emissions test course, Scott Miers ’95, assistant professor of ME-EM, was putting sleds through the paces. His inclination at how isobutanol would affect the operation of the snowmobiles was “no significant difference,” based on previous research and the levels of isobutanol being tested.

“The impact of these alternative fuels has a lot to do with the octane of the fuel and the energy density,” he says. “Ethanol has a higher octane but a lower energy density compared to butanol. Perhaps a mixture of fuels could produce a final product with excellent properties across the board.”

He’s been running emissions testing here for over five years, and on this sunny, windy, 16-degree day, he rode the Kettering sled on the course without issue.

He ran the Kettering sled in economy mode while varying the speed from 20 mph up to 45 mph and navigating the machine around a 1.3 mile test course on the KRC property. That was roughly 25 percent throttle one of the Kettering teammates said.

Miers takes four laps around the test course pulling the aluminum-frame test rig he put together with an undergraduate ME student and KRC staff . The snowmobile exhaust was sampled using a ten-foot heated hose connected to portable emissions analyzer. The rig also contains a fuel-measurement system that  calculates exhaust emissions in grams/mile, identical to emissions analysis reported for automobiles.

“It’s half the weight of the old one, reducing weight from over 500 pounds to right around 250,” he says of the sled. And it features a clear polycarbonate cover that is placed on the rig during the testing to keep snow and ice out of the measurement systems.

“The teams have shown up prepared for the in-service emissions event and pollutant levels are down again this year, which is exciting to see,” Miers says. He really enjoys showing the teams their data, minutes after collecting it and discussing the technical details with team members. “It’s one of the main reasons I do this year after year—to interact with the students and see their excitement and enthusiasm for their snowmobile design.”

The numbers gleaned from the test were then amassed on a laptop nearby. After getting the thumbs-up that they were all there, the Kettering gang was free to return to the shop with their sled.

More fine tuning would be the order of the day before the next challenges awaiting them. The whole scene is an engineer’s dream: high-tech problems to solve; seemingly constant challenges, some low-tech, to overcome; and an incredible network of university, corporate, and  volunteers working together. It’s a challenge just to pull it off.

Update: Their hard work paid off: Kettering was the overall internal combustion winner for the first time. SUNY Buffalo captured the Sensors Inc. Award for Lowest In-Service Emissions and the AVL Award for Best Emissions with its biodiesel-powered snowmobile. Michigan Tech won the award for sportsmanship: no surprise there. The results appear under At Tech, below.

Snowfall Totals
5o degrees on Monday, 10 on Wednesday. Our Keweenaw . . .

Kettering University has finally caught the bouquet. After two years as runner up in the internal combustion division, the Flint-based team took the gold the 2014 SAE Clean Snowmobile Challenge. “We’re ecstatic,” said team leader Matt Birt. “This is our first win at Michigan Tech, and we couldn’t be happier.” Kettering also received other honors: the PCB . . . [ Full Story ]

What would possess someone to purchase a 45-ton steam locomotive? For Stathi Pappas, it was the chance to own something he played on as a child. So, in March 2009, the Michigan Tech industrial archaeology alumnus purchased the Santa Cruz Portland Cement Company No. 2 Engine and began restoring it in his Mineral, Wash., shop.

It’s a distinctly Michigan Tech twist on the ever-popular alternate spring break: students are visiting Silicon Valley companies, where they fit right in, according to one organizer.

We are attempting to find more images of Wesley House. They are hard to find up here. If you have any please send them to Marcia Goodrich or me. Any stories about the house would be great, too.

We also want to remind you to contribute your Class Notes information for the Michigan . . . [ Full Story ]

Students from the Michigan Tech National Society of Black Engineers will visit seven middle and high schools in Detroit to promote college and engineering. In the evenings, they will conduct Family Engineering Night events at three K-8 schools. NSBE’s Alternative Spring Break is conducted in collaboration with the Detroit Public Schools Office of Science and Detroit . . . [ Full Story ]

Regardless of when you graduated, all alumni share the exceptional Michigan Tech traditions from your time here. Winter Carnival just wrapped up, and like every year, the Husky spirit came alive as students celebrated all things snowy (in spite of the cold)!

The Alumni Association and the University are starting a new tradition with the . . . [ Full Story ]

Lina Tormen Taskovich ’52 studied chemistry and chemical engineering at Michigan Tech almost thirty years before Sally Heidtke, and she has some words of wisdom for women students too: “Study a field you like—you have to spend all your life working in it. And go for the top degree in the field of your choice. . . . [ Full Story ]

The Michigan Tech men’s basketball team will make its eighth all-time appearance in the NCAA Division II Basketball Tournament as the Huskies were named in the 64-team field as the No. 6 seed in the Midwest Region. The Huskies will play No. 3 Southern Indiana at top-seeded, and regional host, Drury at 1 p.m. on . . . [ Full Story ]

Alice Flanders, of the Michigan Tech Nordic ski team, wrapped up the 2014 NCAA Skiing Championships with an All-American performance in the women’s 15-kilometer mass start freestyle race. She finished 10th overall. ”Alice had a heck of a race,” Tech coach Joe Haggenmiller said. “She battled the whole race. At one point she was back . . . [ Full Story ]

This group was working in the shop on the ground floor of the M&M Building.

Maybe you took the train out of town on Spring Break, leaving from the Houghton depot. I know there was a Copper Country Express.

The building still stands near the new Portage Lake District Library and that other Library.

Hi, March 5 is St. Piran’s Day (patron saint of Cornwall) and March 1 is the date for the 3rd World Pasty Championships.

Most of you aren’t ethnically Cornish, but since the Upper Peninsula has a historical link to Cornwall and the pasty, it might be a good time to have a pasty even if you have . . . [ Full Story ]

Dennis, It was my dad who did the Agate Beach sign and the Kowsit Lats sign. Thanks so much for putting that in the Alumni newsletter, a friend of mine sent me the link.

There was a fork in the road in Toivola where you could go to either Agate Beach or Misery Bay. Dad also . . . [ Full Story ]

Hi Dennis…My cousin sent some old pictures that she had found. My uncle was Charles L. Murray, a Met Eng grad. He married my mother’s younger sister, Jean Berry who lived on West Edwards St with her parents- my grandfather John Berry who worked at the Copper Smelter on the canal road. He was a . . . [ Full Story ]

Dennis, Not only was I in attendance at the NCAA games in Duluth,fabulous road trip, but I made the Duluth newspaper as well. Clipping attached, and you can also see Kermit and I celebrating the goal behind the Pep Band on the stairs at about 25 seconds into the video, thanks for the fabulous memory flashback!

Dennis, I was the Tech Husky mascot (for hockey) in the early 1970s. This being around 1973 & 1974 and skating before the home games (new ice arena at that time – I also have numerous pictures of the ice arena in construction and even a structural bolt that was not used) and in between periods . . . [ Full Story ]

Hi Dennis, I enjoyed looking (3X’s) at these Photo’s. Since I graduated in 1962, there were a few that I remembered and lots I did not. I wish they were all were ID.

But they all brought back fond memories.

I could not tell If Tony’s Sports Bar building is still standing at the corner . . . [ Full Story ]

Apply for the Cash RewardsTM Visa Signature® credit card that rewards customers with up to 3% cash back on certain purchases, all while supporting Michigan Tech Alumni Association initiatives for students and alumni.

In addition to earning cash back rewards for yourself, use of this card benefits Michigan Tech at no extra cost to you!