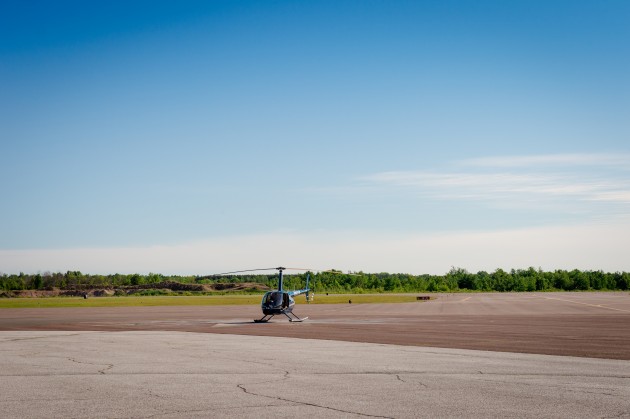 University photographer Sarah Bird recently took to the skies for some aerial shots of campus. Here's what she saw through her lens. 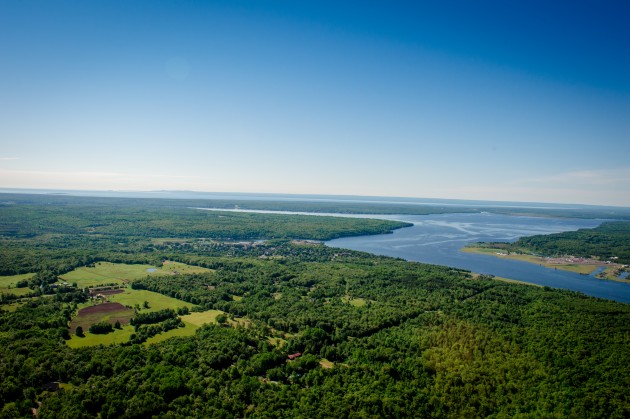 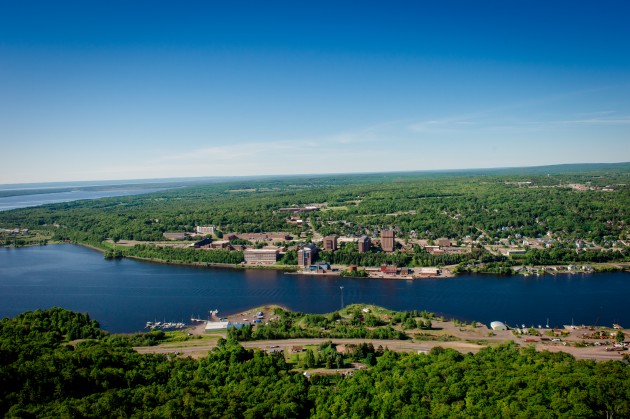 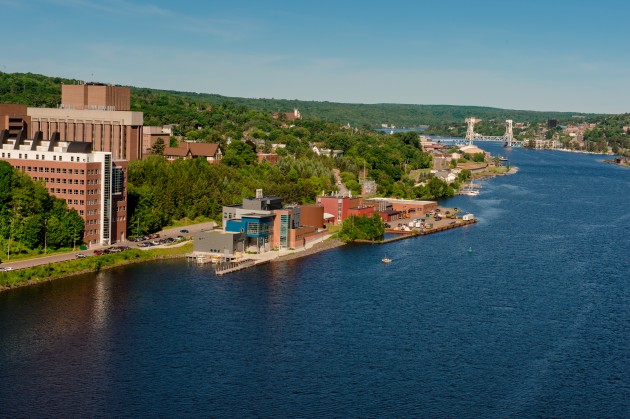 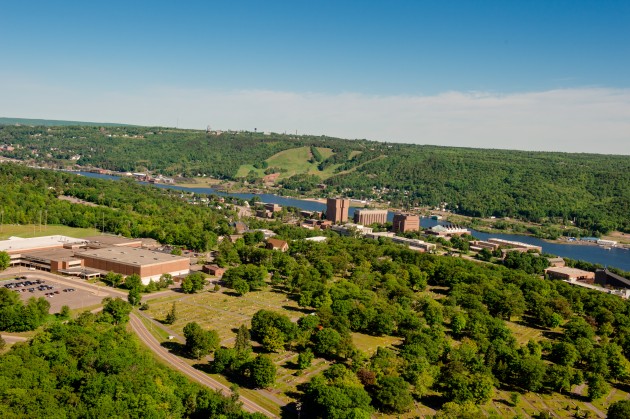 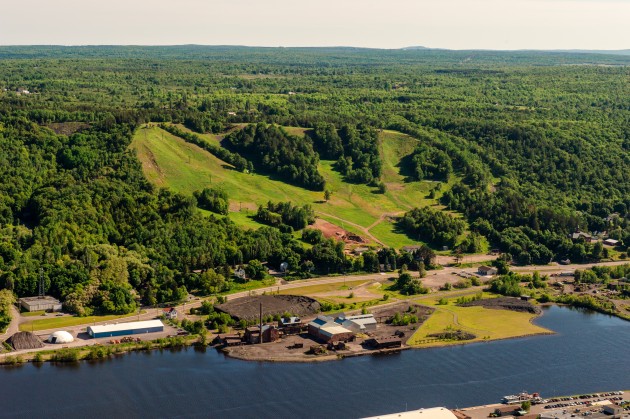 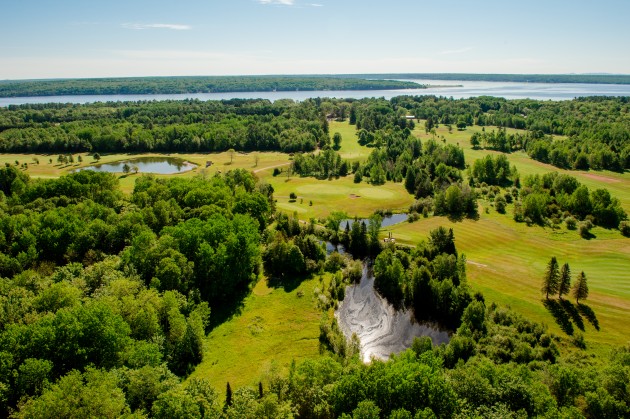 Michigan Tech has an oddly shaped campus. That’s just down to the physical terrain here, and unless US-41 somehow moves and we’re given unlimited funds to move buildings around—if only it were as easy as in SimCity—we’ll always have the elongated campus we do.

I rather like it, as the campus mall is where you see everyone between classes. The highway is right there, easy to give directions for those new to town. And it’s always a reminder to us that we’re a community campus, one where your next class isn’t across a town with half-a-million people.

What I like even more is showing visitors how big campus really is. Dow and the M&M aren’t imposing buildings from the highway side of campus. But go down our other major campus transportation corridor and their size becomes obvious.

Campus just looks a bit different from the Keweenaw Waterway. Or Portage Canal. Or any of the other names we have for the ribbon of water separating campus from all of Copper Island.

It’s also one of the very few places you can see all of the main campus in a single glance. Where you can imagine the foundry in action in the M&M and invasive species research in the Great Lakes Research Center together at the same time. Or see the R/V Aggasiz under power, passing in the foreground of Hillside Place.

I like it because it’s a glimpse at a bit more than 8,000 people hard at work: our students, faculty, researchers, and staff getting to work and making the future happen. I have the privilege of working on annual reports and newsletters for a number of departments on campus, so I get to see just what some of that work is.

It’s a nice reminder, since each of us who has walked through the center of this campus only ever works on a tiny slice of what we do here. Heck, I pretty much lived in Walker and occasionally taught in Fisher: I still get lost in the Dow. And M&M. And a lot of places on campus, really. At least I know which staircase in the MUB goes nowhere.

That’s why I like this view, the one I usually get to on my mountain bike along the path through Ripley. And it’s why I like to catch up with the news here, check in with some of the departments. There’s a lot to take in all at once.

It’s awards season down the way as you’ll see down in the news. All sorts of them.

Know an outstanding alumna/alumnus? Alumni Relations is taking nominations for its board of directors. More on that down the way in Alumni Around the World. 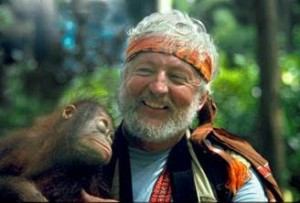 An interesting bit came in from Boyd Norton ’60, a former nuclear physicist and one of the most respected nature photographers out there. He’s won the 2015 Ansel Adams Award, presented by the Sierra Club. The award is for an outstanding contribution to furthering conservation causes through photography. Here’s a bit from the press release:

Norton is the photographer and author of 16 books, ranging in topics from African elephants to mountain gorillas, and from Siberia’s Lake Baikal to the Serengeti ecosystem.
His most recent book, Serengeti: The Eternal Beginning, won high praise from Jane Goodall and NBC News correspondent Richard Engel, among many others. The book was a finalist in the 2012 annual Colorado Book Awards.
His newest book, Conservation Photography Handbook: The Art of Saving Our Planet One Photograph at a Time is due for publication in early 2016. He is at work on three more books.
Norton has lived in Colorado for 46 years. Prior to that he resided in Idaho where he was a nuclear physicist studying nuclear reactor safety for the Atomic Energy Commission. He once blew up a nuclear reactor—deliberately—the subject of one of his forthcoming books.
Norton’s photographs and articles have appeared in most major magazines, including Time, National Geographic, Smithsonian, Natural History, Outside, The New York Times, Audubon, and many others in North America and Europe.

Congratulations, Boyd! I definitely want to read about blowing up a nuclear reactor.

And finally this edition, I hope you and yours have a great holiday weekend. Travel safe and enjoy your time with family and friends.

The Fulbright Scholarship Program is known throughout the world. Each year 8,000 Fulbright grants are awarded to graduate students, university faculty and researchers worldwide. Of those, just 40 recipients are chosen for Fulbright Distinguished Chair Awards, viewed as the most prestigious appointments in the Fulbright Scholar Program. For the first time, a Michigan Technological University professor has . . . [ Full Story ]

One of the greatest needs facing mankind today is the safety and availability of water. Water scarcity driven by climate change and other factors presents major challenges to next-generation water infrastructures dealing with both planned and unplanned wastewater reuse.

The state legislature has passed a budget for the coming fiscal year, and Gov. Rick Snyder has signed it. The budget provides a 1.6 percent increase in state appropriations for Michigan Technological University and sets a 3.2 percent tuition cap for resident undergraduates at all state universities.

A preliminary budget approved by Michigan Tech’s Board . . . [ Full Story ]

Michigan Technological University’s Department of Mechanical Engineering-Engineering Mechanics is one of five mechanical engineering departments nationwide selected by the National Science Foundation (NSF) to participate in a new diversity training program. The others are Purdue, Oregon State, Texas Tech and the University of Oklahoma.

They are participating in the Michigan Science Teaching and Assessment Reform (Mi-STAR) program. Learning ways to . . . [ Full Story ]

Linda Ott, a professor in the department of computer science and Tolou Shokuhfar, assistant professor in mechanical engineering-engineering mechanics, were selected for this national honor.

Team Africa from the Pavlis Institute will be focused on improving the quality of life in the communities of Ghana and Tanzania. Primarily, this will be done through changes within the education system set up in these communities. Through this program the kids in the community will learn about computers, science, reading and personal . . . [ Full Story ]

Do you know of a motivated alumnus/a who would serve fellow alumni well as a member of the Alumni Association Board of Directors? Nominate them today!

Director nominations will be accepted until December 1. Visit our website to learn more and to link to the nomination form.

As we near end of the 2014-15 fiscal year, we want to take a moment to remind our alumni and friends that there is still time to make an annual contribution in support of Michigan Tech – and place your name on the annual Honor Roll of Donors. You can phone the Michigan Tech Fund . . . [ Full Story ]

Sometimes all it takes is that one, good story idea and off goes your imagination. Faster than Corey LaBissoniere’s fingers could type or his hand could write, his brain created the magical world of the “Land of Enchantas.”As a graduate of Houghton High School and a Michigan Tech Alum with a Psychology degree, LaBissoniere always . . . [ Full Story ]

SUNRISE, Fla.— Two players with connections to the WCHA were selected in the seventh round of the 2015 NHL Entry Draft June 27 at the BB&T Center hosted by the Florida Panthers. Michigan Tech defenseman Matt Roy was selected by the LA Kings (#194 overall) and Bowling Green commit Ryan Bednard was selected by the . . . [ Full Story ]

HOUGHTON, Mich. — Jani Lane (Anchorage, Alaska) has earned two more awards for his athletic and academic prowess for the 2015 Michigan Tech track team. The senior was this week named to the Capital One Academic All-America Second Team in addition to receiving

The basketball teams combined for a 47-12 record last year including a 25-5 mark at the SDC Gym. Both teams advanced to the NCAA Tournament. The women’s . . . [ Full Story ]

I was chatting with our news writer Mark Wilcox while putting together some of today’s issue, and somehow we got to talking odd buildings. We came to talking about National Mine’s basketball team, which played essentially on a stage with a net around it to keep the ball out of the crowd. Different!

Kevin – I had to laugh when I read the following: “Now that it’s parade season—and flurries move from probable to doubtful—I’d love to know about these mid-summer celebrations in your life.”  It reminded me of an old saying during my days at Tech in the 1960’s “There are two season’s in Houghton – 9 months . . . [ Full Story ]

Your last newsletter asked for favorite local places to visit during the brief UP summer.

One of my favorite places was the pond above Hungarian Falls.  At the time there was a small county park with a picnic area overlooking the pond.  The other end of the pond has a cantilevered water fall, . . . [ Full Story ]

I can’t tell you how happy I am about Tech Hockey coming to Phoenix January 8-9, 2016. We have been in isolation for so many years, even during the doldrums, which may have been a blessing. We currently live in Overgaard, AZ, which is about 150 miles NE of Phoenix (don’t try to find it . . . [ Full Story ]