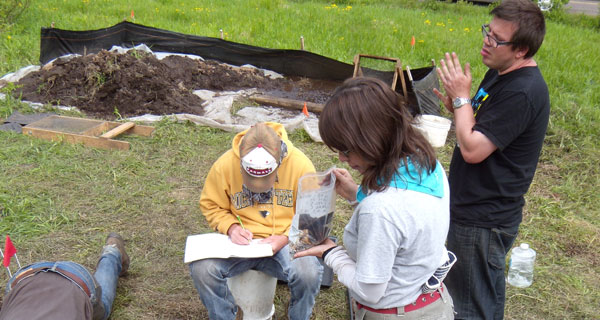 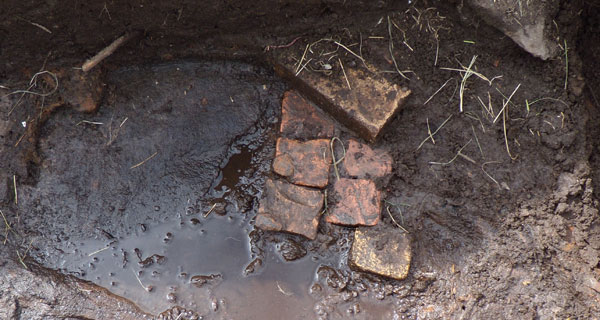 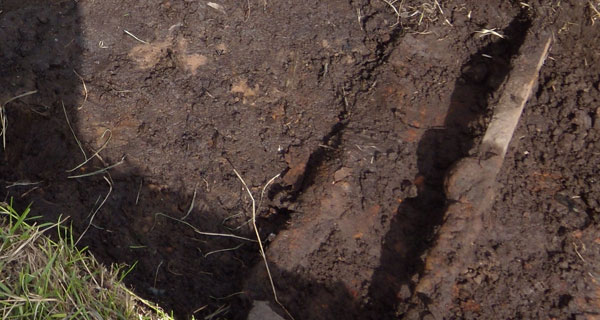 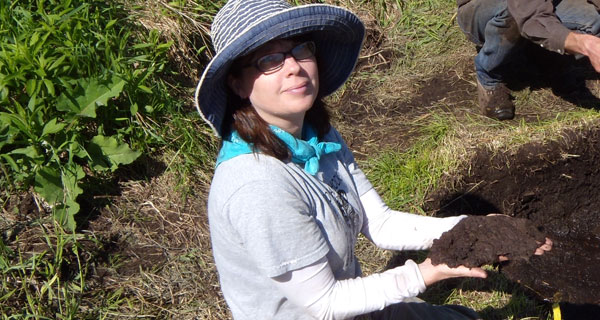 Lee Presley with the fabric. 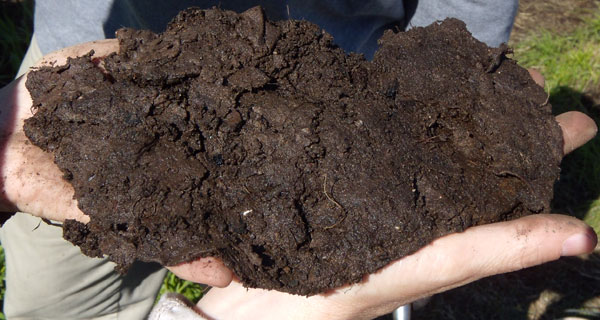 Close up of the fabric find. 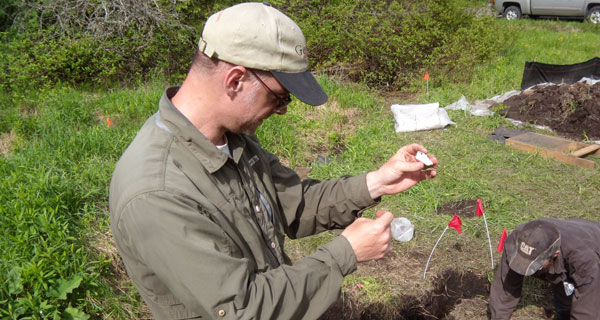 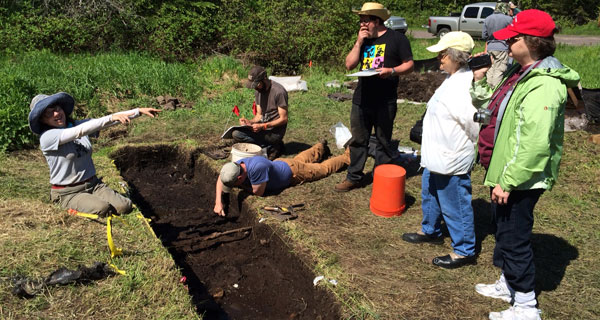 As an archeological dig around a barn continues, other pieces of the past are emerging across four generations. It’s year four of the Department of Social Sciences’ work in the Cliff Mine area of the Keweenaw.

PhD candidate Lee Presley is leading a handful of students in the barn dig under the watchful eye of Professor Tim Scarlett. “Discovery” is an obvious name for this work; “questions” might be another.

At the barn site, a piece of fabric elicits surprise and a suggestion of a possible use. “If this was a cistern, was the fabric used as part of the construction, between wooden structures?” asks Scarlett. “At this point in the life of the Cliff, perhaps the 1870s, it was more bust than boom, so they were reusing items.”

Other questions surround the work. “We think these re-used bricks are part of a curved drainage system,” Presley says, “to get water away from the structures and toward the Eagle River. But, why the curve?”

Prominent in the long, narrow hole is a bar running across its narrow width. “A hinge strap from a barn door,” Presley says. “We found a similar one last season.”

They’ll go high-tech in the dig, Scarlett says, with LIDAR. Collaborators from electrical engineering and surveying will produce high-res images that will be able to reveal subtle changes in the landscape, from possible roadways to that pesky drain, where the cold water would show up well.

As for that fabric. “After it’s stabilized, we’ll use silicon oils to clean it and figure out what kind of textile it is,” Scarlett says. “If it was a cistern, it would have been made of charcoal and fiber filters near a pump head at the bottom. Was it more recycling?”

As we speak a rib bone is moved, revealing a ceramic bowl beneath. “This must be how gold prospectors feel,” says one of the students. 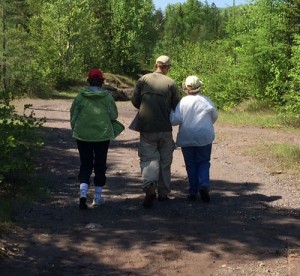 Walking toward the past.

Family Connection
“There’s great joy in getting down to how it came to be,” Presley tells two special guests. Constance Currie is accompanied by her daughter Christine Cox. Currie’s great grandfather was Henry Warren, who leased the mine at the turn of the 20th century. She hasn’t been to the site in 65 years.

“Of course it’s all grown up and the rock piles look smaller,” she says. She’s kept alive the family history, and she hoped old photos would help Scarlett find the location of an old family home. Her grandmother was pictured in front of the old structure, now gone.

She’s kept alive the family history, and she hoped old photos would have helped Scarlett find the location of an old family home. Her great grandmother was pictured in front of the old structure, long gone. But Scarlett says she is “quite possibly providing a Rosetta Stone that will help us unlock the 1880 census records, so we will know who lived in which house.”

Scarlett says Currie connected with other descendants of Henry Warren as she and they read the research team’s blog, (http://cliffmine.wordpress.com/). As students uncover the history of the mine and its community, they share details with readers, who, in turn, leave comments about family lore that help the research. The blog also points readers to the Michigan Tech Fund, where they can donate in support of the research. Forty to sixty percent of the project budget comes from these gifts that support student researchers.

The Warren family home was actually the old mine office, as evidenced in photos by a missing wing of an L-shaped house, and proven via aerial shots, maps, blueprints. Scarlett has indeed narrowed down the location.

“We know it was located by the old schoolhouse,” Scarlett says, pouring over maps. As we all walk toward the location, Currie recalls, “sitting on the cliffs and looking down from above.” Up those cliffs was the location of the mine and its works.

Walking further, we come to the exact location of the old home.

“So, this is it?” Currie asks. It was an odd location, because it was actually an old roadway that had a later life when Calumet and Hecla Mining Company used the area for some of their operations, all the way into the 1960s. That compacted roadway will help preserve what’s underneath, Scarlett says.

“We archeologists can get through anything!” Scarlett replies.

It’s part of the next phase of work, and Scarlett and his team are anxious to dig in and see what they can find. He’ll be sure to pass along any findings to Currie and Cox, and they’ll be able to discover even more of their past, part of the Keweenaw’s copper mining legacy.

Image showing progress of mine project. Cliff Mine Project website.

Nattasak Sukkasam and Tapee Saowalakkul left hot, humid Bangkok, Thailand, in March for a two-month internship at Michigan Tech. They landed in Houghton in a snowstorm. But their mentor, Parinya “Prince” Chakartnarodom, had prepared them, with snow survival tips—and coats and boots.  Prince is a Michigan Tech alumnus and the Thai undergraduates’ materials engineering professor at . . . [ Full Story ]

Plan to reconnect with your classmates and check out what’s new at Michigan Tech during Michigan Tech’s Alumni Reunion, August 7-9, 2014. Online registration is now open, just visit www.mtu.edu/reunion and click on the registration link. You can also call toll free at 1-877-688-2586 to register.

As we near end of the 2013-14 fiscal year, we want to take a moment to remind our alumni and friends that there is still time to make an annual contribution in support of Michigan Tech – and place your name on the annual Honor Roll of Donors. You can phone the Michigan Tech Fund . . . [ Full Story ]

Let your classmates know what you’ve been up to.

Send your Class Notes for the Michigan Tech Magazine to:

You’ll be included in the fall issue.

Nepal is home to eight of the world’s highest mountains, and one alumnus from this rooftop of the world has some pretty lofty ideas. Smriti Dahal graduated in August 2007 with a master’s degree in environmental policy. Her research took her back to her native Nepal, where she studied a group of women in Gundu, . . . [ Full Story ]

Perhaps you were in SYP in 2006. They are touring the Unit Operations Lab.

Gary Shanette was a favorite metallurgical engineering teacher to many. Sadly, he passed away much too young.

Maybe you recall him in SYP?

You have probably already heard from at least one civil engineer, but this mechanical engineer will advise you that your mystery marker is concrete and not cement!

You’re the first, Ray. I’m sure there will be more!

Hi Dennis,
I’m not entirely sure but the girl in the brown shirt, front right, looks like it could be Nora Korth (previously Nora Peterson). The girl in the sunglasses looks familiar too but I am drawing a blank for a name.

We’ve had an inquiry about the life of this song as the freshman chemistry torment. We are trying to know when it began and when it ended. One rumor said it is still played, but we can’t verify that.

The item below was publish this past Saturday, JUNE 7th…

Dennis :  Doc Smith was my best prof at Tech.  In addition to becoming President of Tech,  he became President of ASM International , the world materials information society. I became the only other Tech graduate to be President of this society.

Dennis
As I remember, the concern was prompted by the fact that each contractor had to seed the grounds when done. As successive contractors dug up freshly seeded ground, the assumption was something was wrong. But as Dad pointed out, the doors opened outward, so any subsidence would have been quickly apparent.

Dennis,
I remember disassembling the old Burroughs vacuum tube digital computer in the electronics lab in the basement of Fisher after the IBM 360 arrived. I still use the FORTRAN I learned programming that old Burroughs. I retained one of its memory planes. A thousand bits of ferrite cores strung on copper wire. Far . . . [ Full Story ]

Visit our Career Tools or contact the Career Center (906) 487-2313 career@mtu.edu for more information.