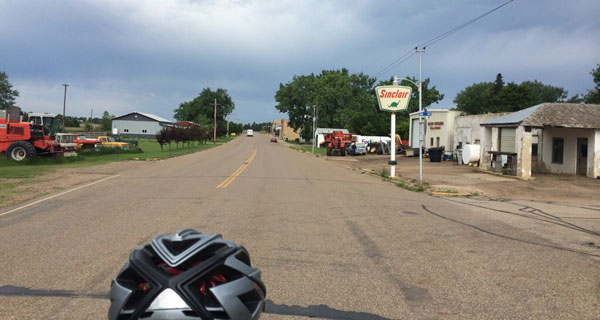 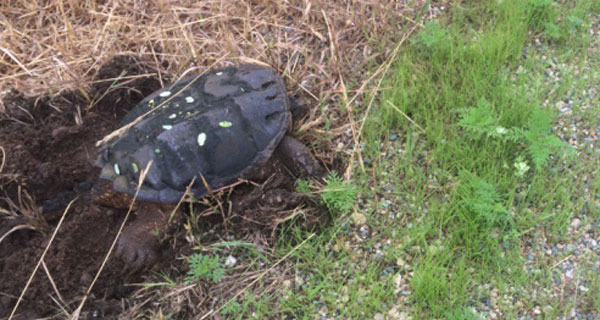 A turtle by the side of the road. 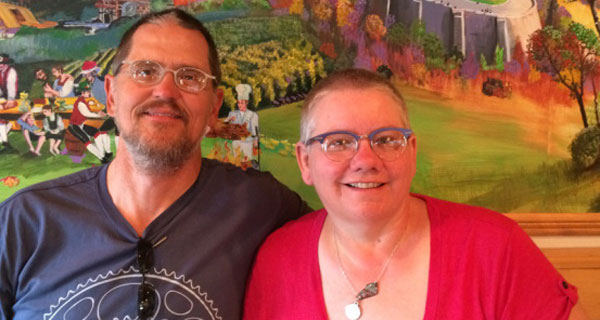 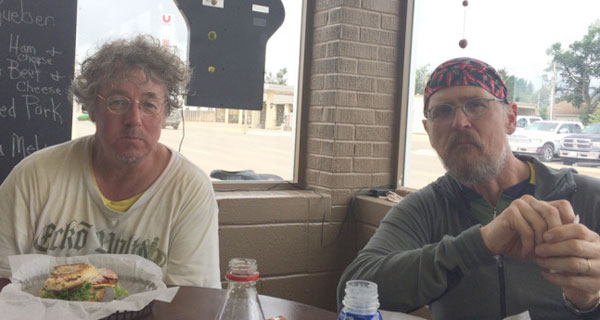 Jim with their Aussie friend. 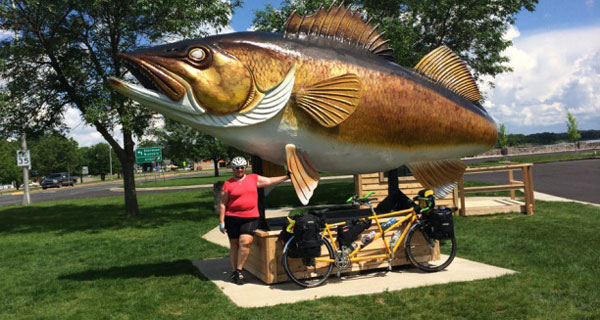 The Big Fish in Garrison. 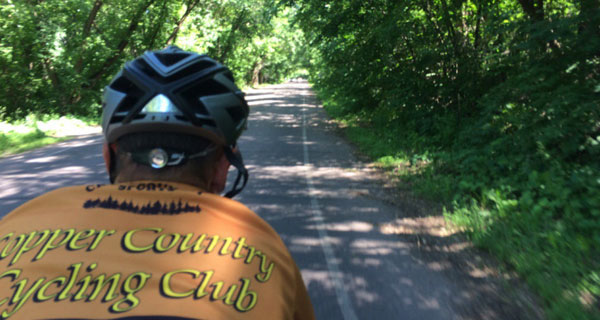 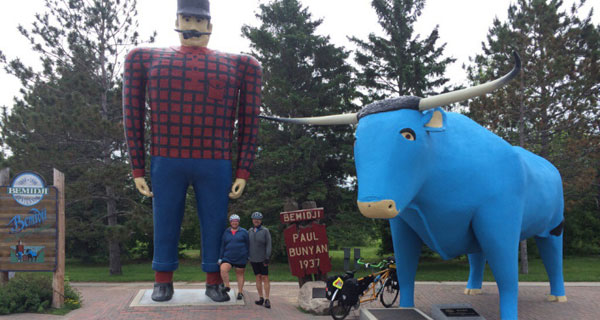 You have to see Paul and Babe in Bemidji. 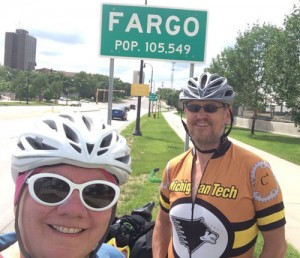 A Michigan Tech alumnus and his wife  quit their jobs and took off on the trip of a lifetime. “It was Shawn’s idea,” Jim Rathbun, 1981 civil engineering graduate says, when asked about the couples’ touring the US by bike. His wife, Shawn, studied computer science at Michigan Tech.

“There was something called Bikecentennial back in 76, and I was fascinated by it,” says Shawn. “Every Wednesday, there would be updates in our paper, with their latest adventures.”

The Rathbuns are having adventures of their own, as they just completed mile 2,500 in their 4,000-mile journey from Bar Harbor, Maine, to Anacortes, Wash. On July 9, they just crossed into Montana, having survived North Dakota where the traffic was intense because of all the oil production, Jim says.

One of their favorite things about the trip is the people they have met, especially through a group called Warm Showers—fellow bikers who provide a place to clean up and sleep along the way. “It’s like a bicycle underground,” says Shawn.

Warm Showers members have hosted one-third to one-half their stays, although they are getting more spread out now that the Rathbuns have hit the West.

“And one of our hosts was a home brewer, so we had too much beer the night before, and we got cramps,” she laughs. “We couldn’t get enough water!”

“We’ve done a lot of camping, too,” Shawn adds. “But lately, with the wet weather, we’ve done some hotels.”

But “riding is better on a tandem,” Jim says. “You always can talk to someone.”

As for quitting their jobs, “You have to plan for it, financially,” Jim says.

“A big hardship was our ride from Fargo to Kindred,” Shawn explains. “There was a wind advisory that day, and we took it head on for much of 15 miles before taking shelter from the wind in a church. Nobody was around, but the door was unlocked, and we found the pastor’s number in an old church bulletin. We called him, and he gave us permission to sleep at the church. It was a great place because the wind continued, and it also rained off and on all afternoon and evening! We were warm, had shelter, made use of the church kitchen and got a lot of knitting done! We’re both knitters and have our needles and sock yarn with us—we’ve both finished several pairs of socks on this trip.”

They met plenty of people biking the other way, too. And in Bismarck, N.D., they met an Australian, rode with him, got separated, and then reconnected. “He was quicker on the uphills; we were quicker on the downhills,” Jim explains.

For the inevitable aches and pains? “Aleve,” he says.

The Rathbuns have family duties waiting for them out West: a new grandchild is due Sept. 1 at son Walter’s ’08 in Vancouver, and they have a daughter, Aimee—another Michigan Tech graduate—to visit in Anchorage, before they head home to Michigan, where son Matthew, a 2012 Tech alumnus, lives.

Those family visits will all be via 4-wheel vehicle.

Michigan Tech’s new William G. Jackson Center for Teaching and Learning was officially dedicated Monday, July 7, and the man who made it possible was on hand for the occasion. Jackson, the president of CableAmerica, graduated from Michigan Tech in 1958 with a BS in Electrical Engineering. But his family ties to the region go back . . . [ Full Story ]

Tolou Shokuhfar will be investigating the inner workings of a protein that plays a key role in human health with funding from a five-year, 0,000 Faculty Early Career Development (CAREER) Award. Shokuhfar, an assistant professor of mechanical engineering-engineering mechanics at Michigan Tech, will study the biomolecule ferritin, which stores iron in the body in a non-toxic, . . . [ Full Story ]

Ellen Raymond wasn’t sure what to do with the treasures she found in her closet. But her friend Sharon Eklund had a pretty good idea: give them to Michigan Tech. Raymond, 94, lives in Baraga, and Eklund looks in on her as a volunteer with Little Brothers Friends of the Elderly. What Raymond found was a . . . [ Full Story ]

Alumni, friends, family and students from all over Michigan spread their Tech Pride in Traverse City on Saturday, July 12.

PEBL software is used in psychological testing. This project aims to develope, test, document and distribute PEBL software in order to improve the overall system.

The Michigan Tech women’s tennis team and five individual tennis players have earned academic honors from the Intercollegiate Tennis Association. The ITA All-Academic Team award is open to any ITA team that has a cumulative team grade point average of 3.20 or above. Individuals must meet the following criteria: 1.) be a varsity letter winner, 2.) . . . [ Full Story ]

Three former Michigan Tech hockey players have recently signed NHL contracts: John Scott (2002-06) with the San Jose Sharks, Chris Conner (2002-06) with the Washington Capitals and Brett Olson (2008-12) with the Florida Panthers. Scott, a 6-8 forward/defenseman, has played 236 games in the NHL with his most recent stop being in Buffalo. He started his . . . [ Full Story ]

Perhaps you know who was on the waterfront with a couple of robots.

Alum Bob Todd ’51, who passed away recently, left behind some photos of these forestry alums.

Any idea on identifications?

I was not in the Sound Design Lab in 2007, but i recognize my fraternity brother Daniel Labrie (featured in the center of the picture).

Good morning Dennis,
I believe Josh Mayo is on the right side in this photo.

Dennis, My wife and I both believe that I’m the student in the left front of the picture carry books in my right hand. I graduated (BSCE) in 1968. Based upon my stature and haircut, I believe this picture is from 1967 or 1968. Best regards, Jim Kubiak

Hi Alumni!
Here is a great charity project that 4 Tech grads recently worked on together. The video was created and produced in order to support the Michigan Marrow 5k event which supports Be the Match (bone marrow registry). I think that it is a great example of Tech grads being creative AND being . . . [ Full Story ]

Calling all Brothers of Sigma Tau Gamma!!! Reminder about our 40th Alumni Reunion that coincides with the MTU Alumni Reunion on August 7-10th. For more information and a list of attendees, visit www.huskylink.mtu.edu/sigmataugamma2014 or contact Bob Wojcik at bobwojcik@fvi.net

Hi Dennis,
I hope all is going well up in the beautiful north country. I’m a Tech Alum (2010 MEEM) and I am contacting you in regards to interesting alumni experiences. The school seems to be in search of alumni doing interesting things so my family suggested I give you a shout. That said . . . [ Full Story ]

I was there for the Cup win and got to see fellow Tech Alum Davis Payne hoist the Cup.

Dennis,
Thanks for the article on Ted Bornhorst’s last field camp, and thanks for including us in the part about the best buy store. I was amazed when Ted pulled out the stack of maps from the very first field camp he taught! It was fun to see Ted and the group of students . . . [ Full Story ]

Dennis,
Gary was from Royal Oak, MI which is apparently where his calculus class took place. He was a Delta Sigma Phi member and an excellent student. Saw him a couple of times during the 80′s and only recall his return to academics as his true ambition. One thing he enjoyed about teaching at . . . [ Full Story ]

Dennis,
Well that song was definitely played in the fall of ’84. I remember going to my first CH101 exam in Fisher Hall and having that song blaring out the windows of Wads Hall. Then of course also having the Chem Students at the doors of Fisher Hall passing out blank drop slips before . . . [ Full Story ]

Though everybody has a memory of Doc Berry, mine are not that great,  one of my Freshman English finals was the greatest bomb of my career at Tech.  If I remember correctly they were traditionally held from seven to nine PM on Friday.  I need not have stayed for it.  We were given quotes from . . . [ Full Story ]

This is tough. Pete is right, the girl in the middle is Emily Fetting, Megan Arends is in the white t-shirt, and Jody Torvinen is in the brown t-shirt. The male in the blue shirt with “SU” may be Andrew Price?, and I think the girl with the head scarf is Charmaine Byrd?. Light green . . . [ Full Story ]

Since Fisher Hall is still one of the topics, I’ve decided to share my favorite story.  It was a movie night playing Seven Brides for Seven Brothers.  Movies often drew hoots, hollers, and comments from the audience, but this great musical brought more than most, and Joe Kirkish stopped the movie came on stage and admonished those . . . [ Full Story ]

Dennis,
That was a awesome tribute to Barb and Ace Lucchesi that you shared with us. They were turely great people and  are missed, but will never be foregotten. Special Thanks to Don Morin, Don you hit  a home run with this tribute

Dennis,
I heard the term SPED used during my undergraduate years at Tech (78-82). It was used as a derogatory term similar to spazz or dork.

LinkedIn  Find, be introduced, or collaborate with qualified Alumni from around the world. LinkedIn is an interconnected network of experienced professionals representing 170 industries and 200 countries.  You can also join the Professional Networking sub-group and share your experience with a student.  http://www.linkedin.com/groups?gid=46876&trk=anetsrch_name&goback=.gdr_1251575318073_1

Facebook Become a fan of the Michigan Tech Alumni Association Facebook page and get up-to-the-minute news and events in your news feed. Check out the Regional Alumni Chapter page for your area too! http://www.facebook.com/MichiganTechAlumniAssociation

HuskyLink Join today and you’ll have access to the online directory to find that lost classmate, register for alumni events, update your contact info and post class notes. Visit www.HuskyLink.mtu.edu.