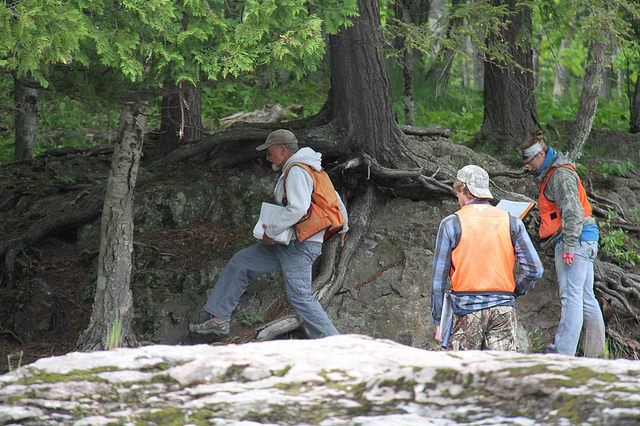 "What is Rule Number One?" 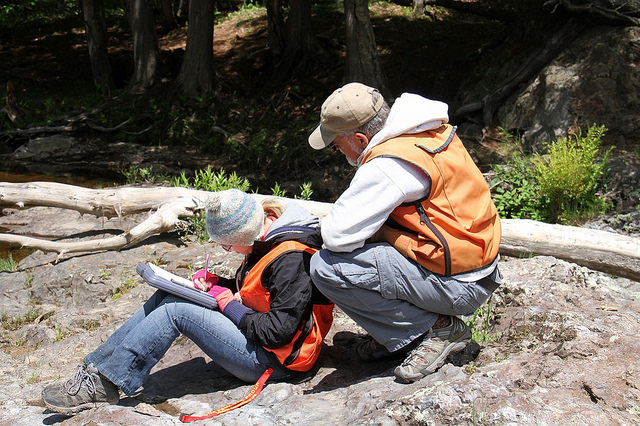 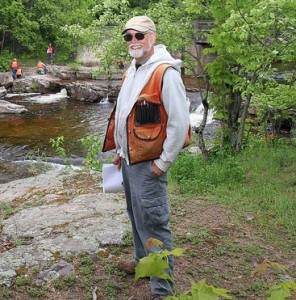 The end of 30+ years of teaching the field course.

That’s Professor Ted Bornhorst’s assessment of just finishing his last summer field course in geology. After 32 years, it’s been a lot of miles, smiles, and students.

“It was roughly 600 students over the years,” he says. “All geology, geological engineering, and geophysics majors take the course.”

The course actually goes back at least into the 1930s and 1940s, and the legendary Kiril Spiroff taught it for multiple years followed by Steve Nordeng. (Coincidently, Bornhorst took one of Spiroff’s last classes and took field geology from Steve Nordeng.)

Both Bornhorst and his wife, Laurie, are Michigan Tech alums who took the class, and together they scoped out the sites then being used for mapping and field study. Some of those initial sites not only remain in the class today but used were used long ago too. Field sites used in the class have changed in location and emphasis over the 32 years.

“We still visit the South Range quarry, a field site used for at least 60 years,” he says. “A lot of our time now takes place east of L’Anse today.”

Regardless of location, students are exposed to many different problems: identifying and mapping in the field, Bornhorst says.

Recently, their travels took them to the Best Buy store in Marquette, where an unruly boulder came crashing down. There, he ran into a couple of former students Allan Blaske with GEI consultants and Jamie Matus ’84. He ran into a bizarre coincidence, too. “Before that trip, I couldn’t find my latest map of the region, so I grabbed a folder of old maps that happened to include those created during my first years teaching the course,” Bornhorst says. “Sure enough, the maps dated to 1983 and 1984, the years that Matus and Blaske took the course from me!”

As for the students he’s seen over the years, “I’ve most enjoyed getting to know them as people,” he says. “We are together from 8:00 to 6:00 for five weeks. I enjoy seeing them mature, develop, and improve. I’ve always taught continuous improvement.”

In fact, one alumnus credited Bornhorst with teaching him continuous improvement concepts that he uses in his successful business every day. “It’s great to hear that.”

Important habits are developed in the course, he says: collecting data, developing multiple hypotheses, and testing those hypotheses with the data.

“You have to learn to make good at observations and apply them to solving problems in teams and individually.” He stresses, “You have to push yourself to get better and better.”

As he takes his leave, Bornhorst says it’s important to continue the course as a local geology field camp, as it becomes the geologic “home” for graduates. Many universities send their students to field camps some distance from campus, often in the western US.

“Here, they learn firsthand the geologic story of the area where their school is located,” he says. “They are better connected to the area and the University.”

While less emphasized in the beginning, his most important lesson now, day after day, to all those students?

He stands and puts one finger in the air.

“Safety,” he says. “I harp and I harp and I harp on it. It’s the first thing we do every morning. ‘What’s rule number one?’ They all put up their finger and say, ‘Safety!’ And as part of safety that’s why they map with a partner, and they all learn to use a compass so that they can always find their way out.”

Assistant Professor Chad Deering will be taking over the field course, Bornhorst says. Odds are, he’ll be stressing safety too, and just perhaps he too will hold up his finger in the morning air.

Guatemala’s Pacaya volcano needs monitoring to prevent death and destruction from eruptions and landslides, and Michigan Tech researchers are helping local residents and government agencies do just that. As part of a two-year project, Thomas Oommen, Gregory Waite, and Rüdiger Escobar-Wolf have joined their Guatemalan counterparts scouting the countryside around the volcano to come up with . . . [ Full Story ]

In 1900, about 1.6 billion people lived on Earth. Just a few generations later, over four times as many of us share the planet. There are plenty of reasons for the population boom—childhood vaccinations, better sanitation, antibiotics—but perhaps the most important driver is a discovery that allowed us to snatch nitrogen from the atmosphere and turn . . . [ Full Story ]

Did you know that there is a tropical rainforest in the United States?  It’s in Puerto Rico—the El Yunque National Forest—and Michigan Technological University researchers are joining U.S. Forest Service and U.S. Geological Survey scientists there to get a handle on the impact that climate change—particularly warming—is likely to have on the tropical forests . . . [ Full Story ]

Alumni and friends from the Kentucky Alumni Chapter spent a casual afternoon on the BBC Brewing Company deck reminicsing about their time at Tech and discussing future event ideas. Many thanks to Chapter Leaders Robert MacDonald & Tom Stutts for organizing the event!

Did you know, the invitation lists for Alumni Association events are determined by . . . [ Full Story ]

The Rekhi Enterprise Team Challenge is taking place on Superior Ideas. The team that raises the most donations will receive a matching gift from Superior Ideas.

A great way to support some great Michigan Tech projects.

A generous scholarship and Michigan Tech’s reputation as a good school for students interested in science, technology, engineering, and math (STEM) fields brought Danielle VanDyke to Houghton. She graduated in 2006 with dual BS degrees in Computer Science and Psychology. VanDyke credits the University with teaching her leadership and team-building skills, improving her communication skills, . . . [ Full Story ]

Two former Michigan Tech hockey players—Scott White (1985-89) and Josh Robinson (2008-12)—were part of this season’s Calder Cup Championship run by the Texas Stars of the American Hockey League. The Stars defeated the St. John’s IceCaps, 4-3, in OT of Game 5 of the best-of-seven series to win the franchise’s first ever Calder Cup on . . . [ Full Story ]

Former Michigan Tech hockey player Davis Payne (1988-92) lifted the Stanley Cup last Friday (June 13) after the Los Angeles Kings defeated the New York Rangers 3-2 in the second overtime to win the best-of-seven Stanley Cup Final series 4-1. Payne, who has had a 22-year career in professional hockey as both a player and . . . [ Full Story ]

Maybe you recognize someone here.

We don’t know a specific year.

Dennis,
Queen’s album “The Game”, which contains Another One Bites the Dust came out in June of 1980.  This song was definitely played through the open windows of the Wadsworth Hall dorm rooms as the freshmen made their way to campus on the night of the first chemistry exam in September 1980. I lived . . . [ Full Story ]

Barb and Ace Lucchesi were great MTU hockey fans for many years. The MTU hockey teams of the 70’s and 80’s shared some great successes on and off the ice and one of the special times and memories off the ice was with Barb and Ace at their annual Spring Hockey Huskies chicken barbeque hosted . . . [ Full Story ]

I think Mike Meeuwsen had them printed up.

Meeuwsen had them made. Found a printer in Green Bay that did regular work for tech. So the printer had the logo on file. I think we all sold some and used proceeds for beer.
What is surprising . . . [ Full Story ]

Gary and I were fraternity brothers. We belonged to Delta Sigma Phi. I remember Gary quite well. I was also in the Metallurgical Department so that I knew Gary as a fraternity brother and fellow student although I was a year or so ahead of him. He was very personable and great company. I thoroughly . . . [ Full Story ]

Another Fisher Hall tidbit …….. My Dad (Eino Reini) bought an old oak roll-top desk in the early 1960’s from Tech surplus. After they got it home and cleaned it out, they realized it had originally been Dr. Fisher’s desk as there were several letters to him in the drawers. It’s a beautiful old roll-top . . . [ Full Story ]

I thought I would just clarify that I am not the girl in the brown shirt. I started Tech in 2005, so I wouldn’t have been SYP staff. She remains a mystery!

There used to be many of these markers along county roads – they have disappeared; either stolen, fallen over or removed by the county road crew.

I believe they’re from depression time or perhaps the 40′s. They are not survey markers to monument a section corner. They had the county road no. . . . [ Full Story ]

I well recall the day 41 years ago when I first heard radio host Casey Kasem, his warmly hypnotic voice so exuding the equally warm and comforting notion that music can and does bring people together.