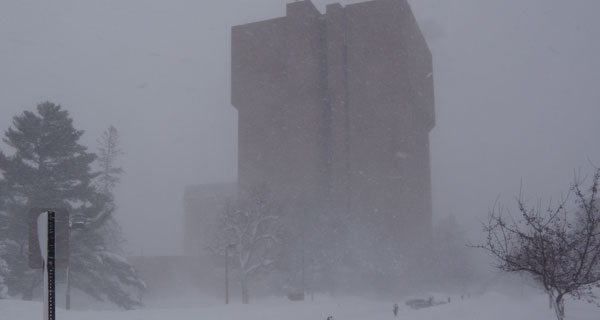 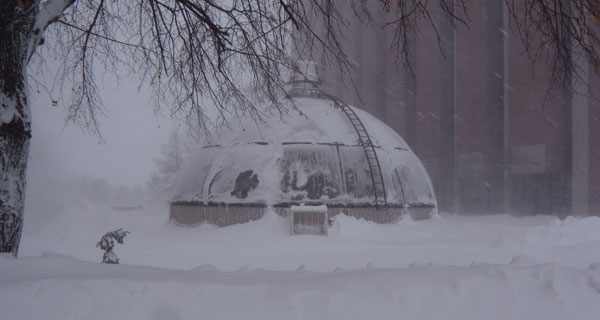 I would have loved to duck in here. 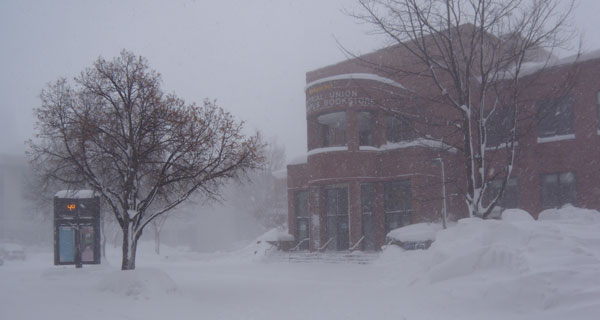 The kiosk and the MUB. 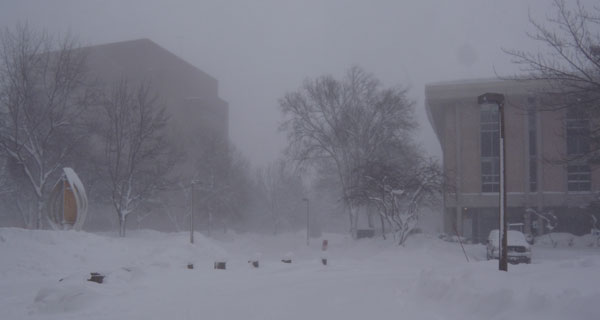 Looking east from the MUB. 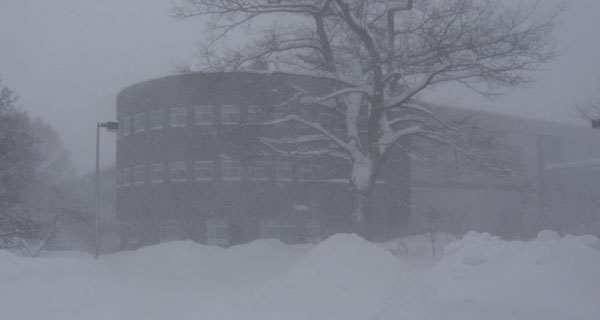 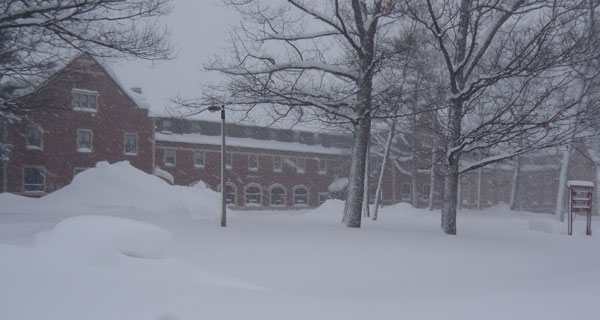 DHH behind the snowbanks. 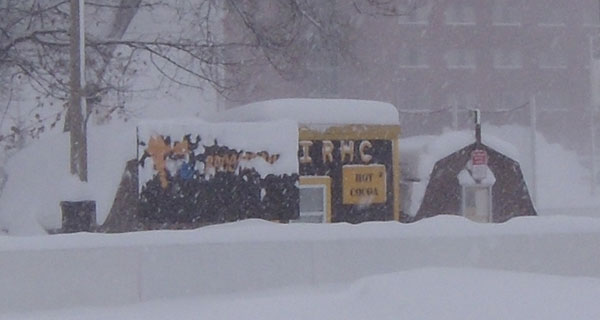 I could have used some hot cocoa. 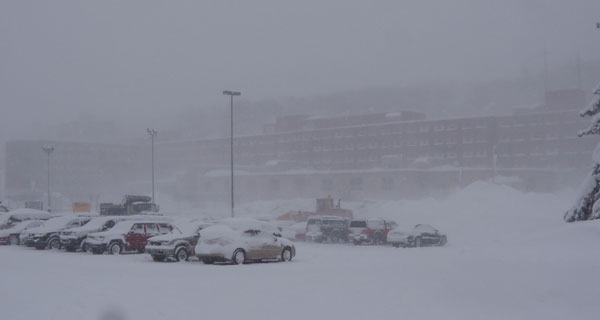 Wads in there somewhere. 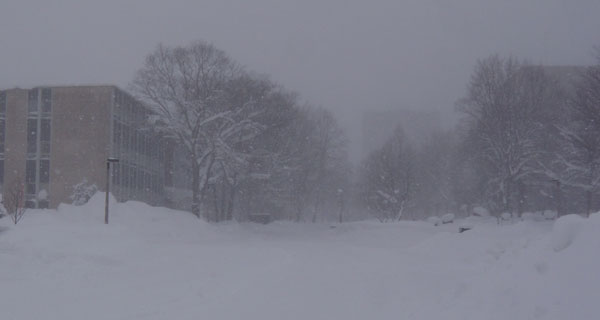 Looking west between Fisher and Dillman. 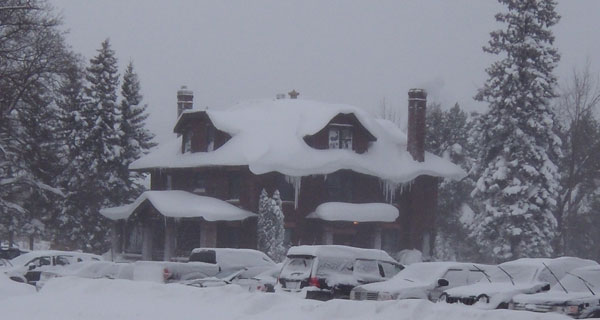 Your Alumni House was looking cold. 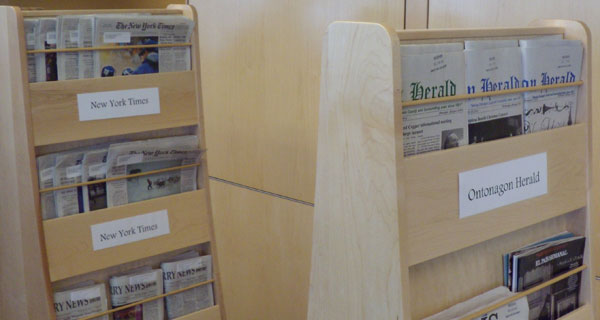 Warming up in the library, where you can read the Times or the Ontonagon Herald! 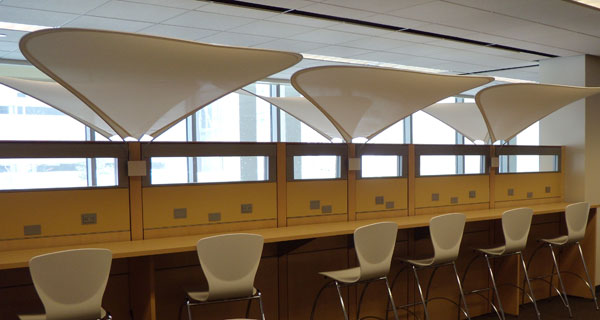 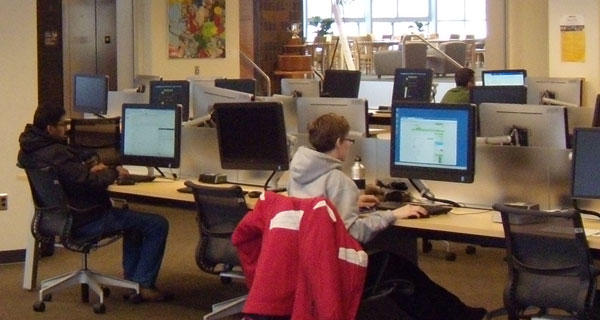 New study areas in the library. 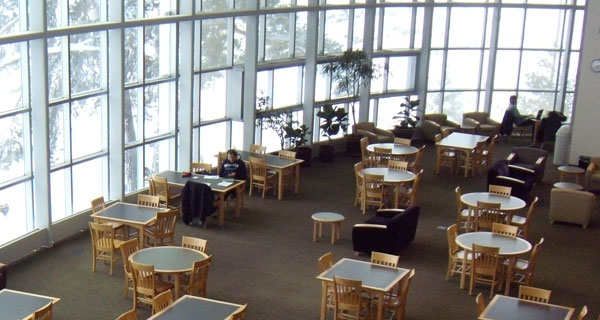 The library reading room was a warm refuge. 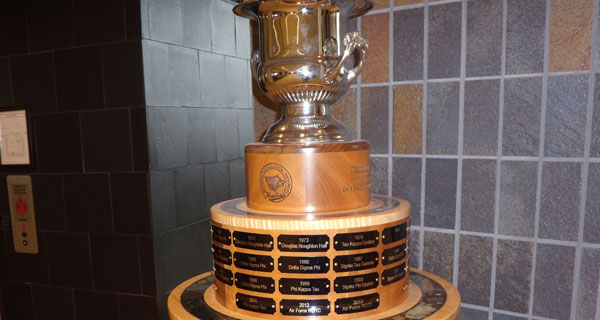 In the third of our series on retired profs, we chatted with Anton Pintar, professor emeritus in chemical engineering. He was lamenting the winter that has all of us shaking our heads in disbelief, and he was contemplating cleaning off his roof again.

He has kept busy by being elected to the Houghton County Board of Commissioners, where their biggest issue, like everywhere, is keeping a balanced budget with dwindling state revenue sharing.

“One of our biggest accomplishments is the new transfer station in Atlantic Mine,” he said. The new facility allows residents to environmentally dispose of refuse from their homes and businesses.

A “Range Towns” resident since birth, he still lives in Painesdale.

He stays active with academia through the American Society of Engineering Education. He’s been secretary of the math section since 1996 and attends annual meetings in locales from Vancouver to Hawaii.

He’s also active in the local Copper Range Historical Society and efforts to save the Painesdale Shaft No. 4.

On campus, he was most proud of a major accomplishment: the safety procedures for chemical processing and the Unit Operations Lab.

“We started them back in the 1980s, before Bopal even,” he said, referring to the gas leak disaster in India in 1984. “The program is still going well. I stay in touch with Dave Caspary [manager of lab facilities for chemical engineering].”

He was also the advisor of the American Institute of Chemical Engineers (AICHE) student organization for many years. He  won the Michigan Tech Distinguished Teaching Award in 1981.

He misses teaching, he says, especially the contact with the students.

But, “I don’t miss giving out exams.”

The combo of snow and cold was just awful, as we cleaned our roof and deck, again this weekend, when it warmed up and made everything heavier.

It started over a poker game. Astrophysicist Robert Nemiroff and his students were playing cards (for chips) last summer, chatting about Facebook. They wondered: If there were time travelers among us, would they be on social media? How would you find them? Could you Google them? “We had a whimsical little discussion about this,” said Nemiroff, a . . . [ Full Story ]

The Library of Michigan has chosen Nancy Auer’s book “The Great Lake Sturgeon,” coedited with Dave Dempsey, as one of the 2014 Michigan Notable Books. Twenty books made the list, ranging from Jim Harrison’s “The River Swimmer” to a pie cookbook to a collection of Upper Peninsula poems and stories. “I was totally surprised and pleased,” . . . [ Full Story ]

It was their biggest gathering yet! Alumni and friends from the Green Bay Chapter came out for their monthly gathering on December 19th at the Keweenaw Pub. With an alumni span of fifty years, many stories were shared and great connections made. Do you live in the Green Bay area? The next gathering is on . . . [ Full Story ]

Michigan Tech outplayed No. 3 Ferris State on both ends of the ice for most of the game yet came away with a 3-2 loss tonight in WCHA play. Bulldogs’ netminder C.J. Motte totaled 44 saves, and the Huskies had a goal disallowed in losing their second straight one-goal setback to FSU. Shots on goal favored . . . [ Full Story ]

Danielle Blake dominated on both ends of the floor to lead Michigan Tech to a 66-61 win over Ashland on Saturday (Jan. 11) at Kates Gymnasium. The Huskies and Eagles found themselves on the national stage, but it was Blake and the Black and Gold making the big plays down the stretch, snapping a . . . [ Full Story ]

The Michigan Tech men’s basketball team fell 71-70 on Saturday (Jan. 11) at Ashland. The Huskies came back from a 16-point first half deficit, and Ben Stelzer had a chance to win it for Tech but had his shot blocked as the clock ran out. With the Huskies down one, coach Kevin Luke called a . . . [ Full Story ]

I love these old publications. This served as a guide for first-year students, ca. 1958. Thanks to Bill Deephouse ’63 for “The Michigan Tech Way.” Do any of you recall, or still have, a “bulletin” or something similar?

Maybe you were hanging out with the ASTs at the fair.

Hi Dennis,
This is from my Junior Year when I was in Team Software Project. I’m seated in the rear center with the grey Michigan Tech sweatshirt on. My roommate at the time, Josh Larson (also ’07), is standing off to the far right. I can’t remember who the other folks in the picture . . . [ Full Story ]

Dennis,
I brought my slide rule from University of Manitoba, but found it in operable within a couple of days of arrival at Tech. The bamboo swelled & the slide wouldn’t. I ended up buying a new acclimatized one at the Book Store. My original rule finally became useable my Fall Term ’63. One . . . [ Full Story ]

Hi Dennis,
In your latest newsletter Lynn Osika spoke of his 1980 Biltmore stick, used by forestry students. I also still have mine, but it dates to the summer of 1962. It was the year the class of 1964 held their forestry summer camp at Camp Alberta (Ford Forestry Center), practicing field forestry and . . . [ Full Story ]

The 21 Coldest Colleges In The Country According To College Prowler

At Michigan Tech, our chef Eric Karvonen gave a great demo on how to make the tasty dish.

Dear Dennis,
Yet another great newsletter! Thanks so much for keeping us connected on the west coast. At times I wish I lived closer so I could attend special events like the GLI (But watch the Rose Parade and you will see why I live here). Go Huskies!!!

Have a Very Happy New Year!

Dennis – hopefully the links work on the following attachment. I believe Fred graduated from Tech. You may want to write something up in the alumni news.

Here’s the same story as it appeared on WCCO a few days ago. Even more impressive.

Marty Lagina ’77 and his brother, Rick, are featured on a History Channel series about the Curse of Oak Island. Buried treasure? We’ll find out.