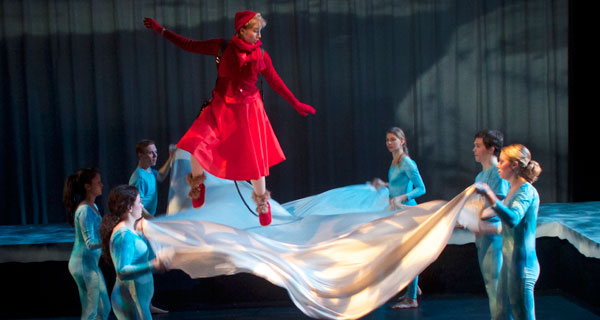 Rose in the air and on the ice. 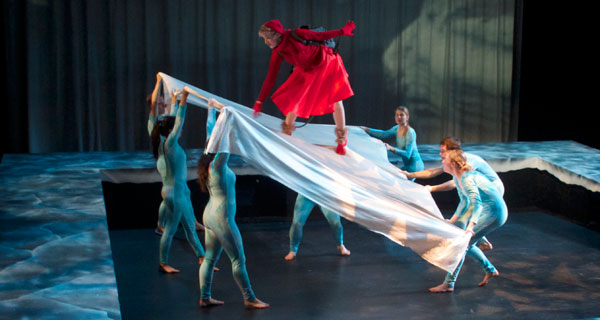 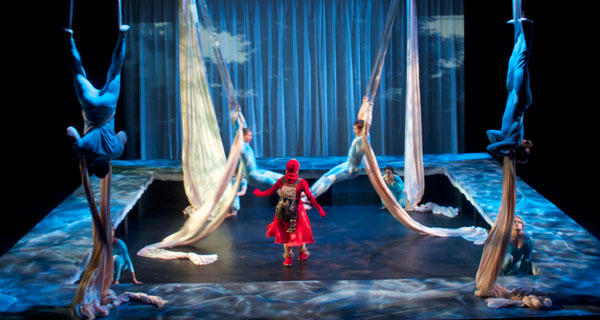 Blocking her way to see the witch. 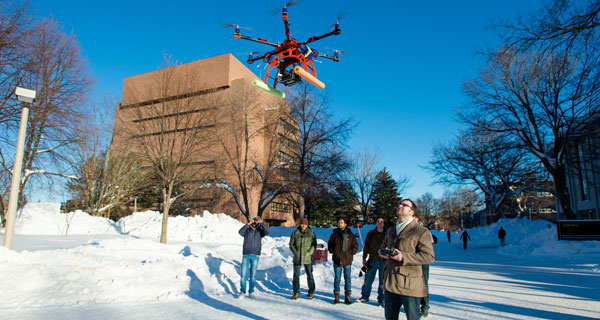 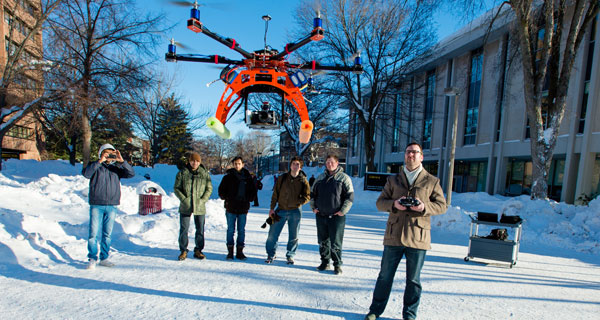 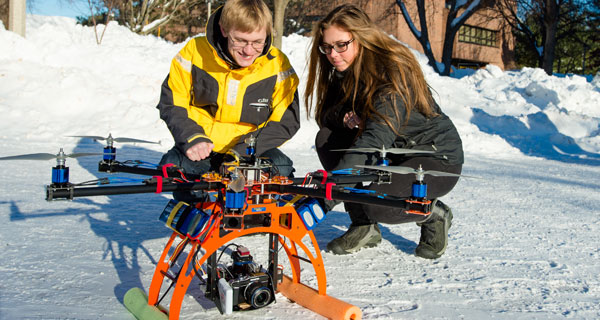 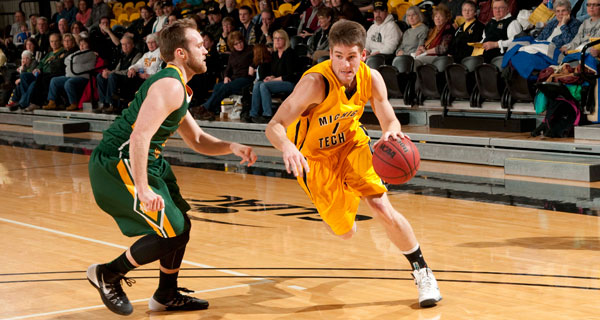 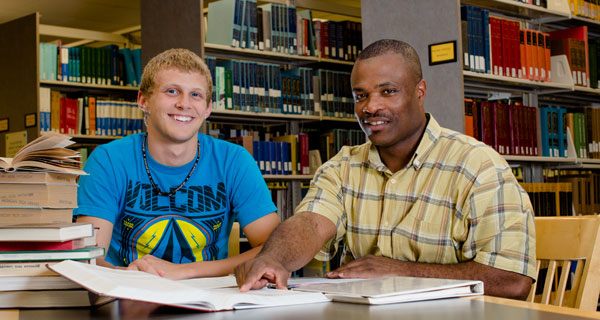 Students hitting the books for midterms.

It was set in a small Michigan town in the grip of an endless winter (we could relate), thanks to a spell cast by an evil witch. The visual and performing arts department presented Rose and the Rime recently, and it was a marvel of special effects, sound design, and aerial artistry.

Directed by Associate Professor Patricia Helsel, the story unfolds as Rose, played by Paige Borel, hears the story of her parents’ demise and the perpetual winter  brought about by the Rime Witch, played by Niloofar Skirkhodaei. The secret is to recover a magic coin from the witch and return it to the town, Radio Falls, which is located on a Great Lake.

Radio, and clever Tech technology, play prominent roles for the duration. The sound of static on the radio is replicated in distorted images on screens and tapestries. Winter images are portrayed as wind howls through the theatre. (A low-tech Yooper scooper also makes a cameo appearance.)

At one point, Rose’s caretaker Uncle Roger, who runs the radio station, reaches out to the world. “Help! We are trapped here.” His signal breaks up.

The most amazing part of the play was the aerial movements, high above the stage with no nets, of the “Dance Corps” swirling in their tapestries. They are upside down at times, and the play takes on the tone of the Cirque du Soleil, minus the Soleil, especially with percussion-dominated music.

The music signalled important changes in the play: ambient music with wind and rumbles as Rose journeys closer to the witch. Later: acoustic music, played live by the actors, introduces the long lost spring.

Rose brings about that spring by getting the coin from the witch, and initially it brings warmth and joy to Radio Falls. Rose even weds one of two brothers who discover this now-warm, scenic place. Their child is stillborn but brought to life by the coin.

Eventually, the coin brings about jealousy; violence; the end of Rose, her husband, and uncle; and another endless winter. Only two remain: the baby and her uncle, who discovered her after the final melee. As the play ends, a cycle of life begins anew in the midst of a “beautiful” winter.

Kudos to Helsel and all the actors, athletes really, and the incredible special effects and sounds. We were lost in it all, as we got a brief glimpse of spring on a February night.

Snowfall Totals
It’s not just the snow, it’s the cold. We closed at 2:00 p.m., Friday, due to the latest blizzard. No, not Blizzard (speaking of, see below).

Say you forgot about Valentine’s Day, and it’s too late to send that certain someone some roses. Someday, you’ll at least be able to send their scent. A Paris laboratory under the direction of David Edwards ’83, has created the oPhone, which will allow odors—oNotes—to be sent, via Bluetooth and smartphone attachments, to oPhones across the . . . [ Full Story ]

Peptides are an intriguing class of drugs. They are made of amino acids, just as humans are, and because of their intimate relationship with our own biological molecules, they have the potential to fight some of the most intractable diseases, including cancer.

But they can be difficult and expensive to make. A year’s worth of . . . [ Full Story ]

The front hallway at the SDC was crowded with students in formal clothes, straight backs and some signs of nerves. They crowded around tables littered with nametags and maps of the Multipurpose Room, where more than 200 companies were lined up to recruit interns, co-ops, and full-time employees. Many of them were drawing lines and . . . [ Full Story ]

We are trying to trace the history of the Huskies mascot. We are featuring a photo from 1970-71, from Bill Wassberg. He said they revived the tradition, so it began prior to this. We know there have been several versions, including “the Bear” and “the Wolf “(or two). Dig through those drawers, look in the . . . [ Full Story ]

Regardless of when you graduated, all alumni share the exceptional Michigan Tech traditions from your time here. Winter Carnival just wrapped up, and like every year, the Husky spirit came alive as students celebrated all things snowy (in spite of the cold)!

The Alumni Association and the University are starting a new tradition with the . . . [ Full Story ]

Since graduating in 2000 with a BS degree in Metallurgical & Materials Engineering, Amy has built upon her Michigan Tech education to achieve great success. She added MS and PhD degrees in Metallurgical and Materials Engineering from the Colorado School of Mines and received the Willy Korf Award for Young Excellence in 2007 for her . . . [ Full Story ]

The Michigan Tech women’s basketball team got back into the win column with a 72-60 win at Lake Superior State on Saturday (Feb. 22). The Huskies outscored the Lakers by 12 in the first half and had four players in double figures to move to 18-7 and 16-5 in the GLIAC. Tech is now in a . . . [ Full Story ]

The Michigan Tech men’s basketball team had its six-game winning streak come to an end after suffering an 82-61 loss at No. 18-ranked Lake Superior State on Saturday (Feb. 22). The Huskies fell to 19-6 overall and 15-6 in the GLIAC. LSSU captured the GLIAC North Division title with the win and improved to 26-3 overall . . . [ Full Story ]

Dennis: My family went to the alumni event at Bowling Green as well as both the Friday and Saturday night games. It was a great weekend all-around with a pair of wins and some friendly faces in the crowd. I wanted to thank Asst. Coach Damon Whitten for arranging an impromptu meet and greet with #7- . . . [ Full Story ]

Dennis,The front team appears to be Army ROTC. The two “dogs” in front are some of my former residents from Powerhouse Hall in West McNair. Their names are Josh Ball and Adam Moore.

Thanks for the pictures and the updates from campus.

Thought you’d appreciate this short video from the 1981 NCAA consolation game, Tech vs. Northern. Both current coaches, Mel Pearson at Tech and Walt Kyle at Northern, played in this game, held in Duluth.
https://www.facebook.com/photo.php?v=10153817647690640
Anyone remember being there? The Pep Band was. Email me.

Finally some of the press, including Reuters, has remembered the college team that won Hockey Gold in 1960. The lack of recognition has bothered me since we won at Lake Placid in 1980 and with virtually no mention of the earlier Squaw Valley, CA. win. In retrospect even more amazing since the extent of college . . . [ Full Story ]

Be prepared to spend a lot of time here.

This site features fantastic images of the Keweenaw Peninsula and elsewhere, all shot by a camera rigged on a kite.
https://www.facebook.com/KAP.Invincible

Your newsletter brings back good memories every issue.  Recently you have had a couple articles about Dr Pintar and some of the old buildings McNair, Hubbel and Sperr hall.  I remember being in a Unit Operations class – must of been in the fall of 1971 and I think Dr Pintar was the teacher (could . . . [ Full Story ]

It had to happen:

It is a fun thing to play with every now and then. There are even directions as to how to use one!

Hi Dennis – As Paul Harvey used to say, here is the rest of the story to go along with the photos you scanned yesterday.

I was wandering around the country between the Elm and Misery rivers back in October of 1985 with a couple of my friends looking for birds or steelhead. We were . . . [ Full Story ]