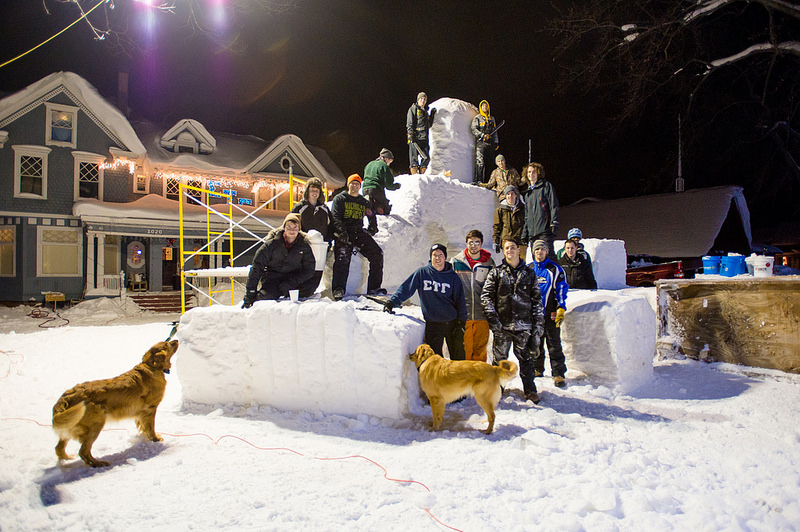 Sig Taus and their best friends. 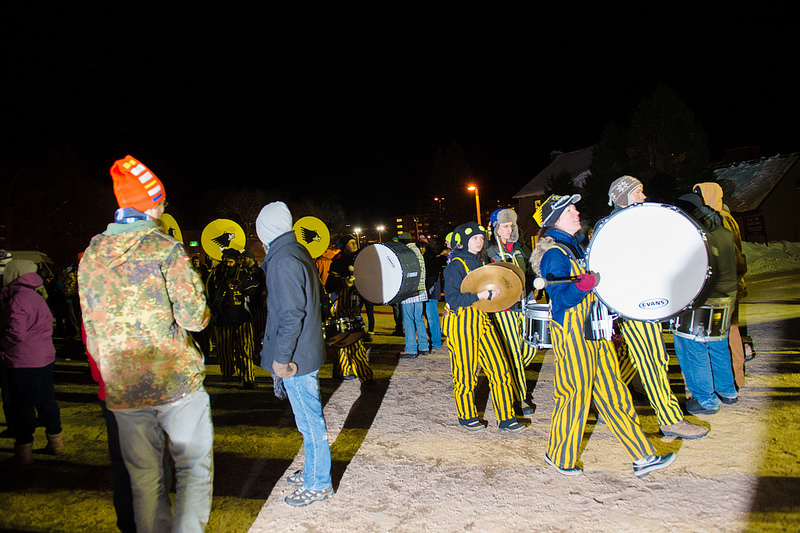 Of course they rocked it. 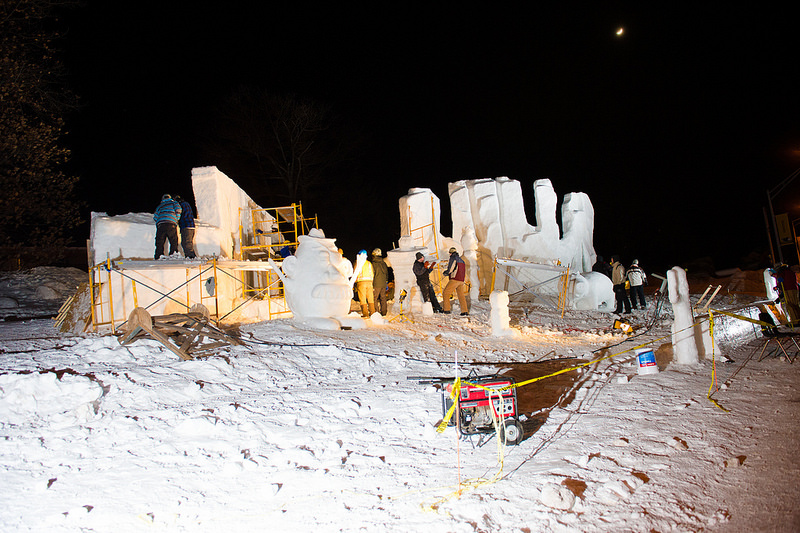 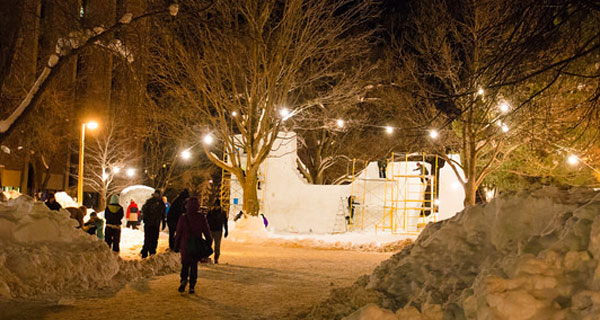 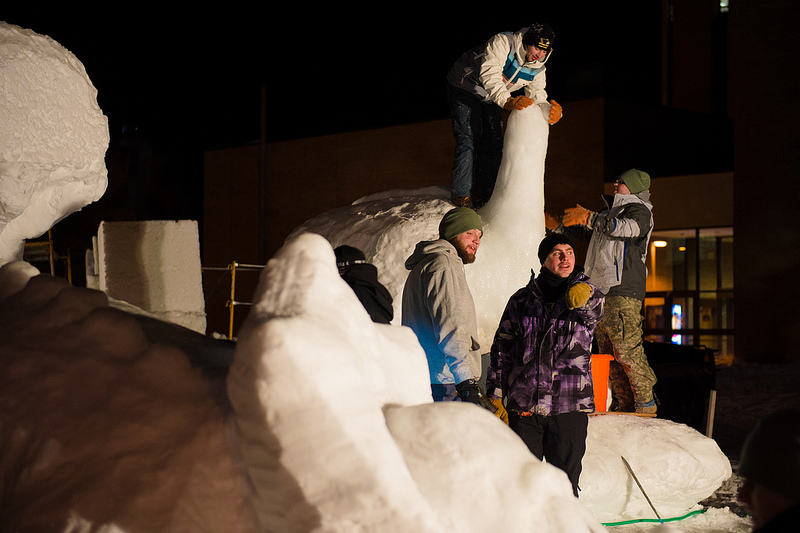 Army ROTC was working on the Land Before Time.

DZ's nod to the Wizard of Oz. 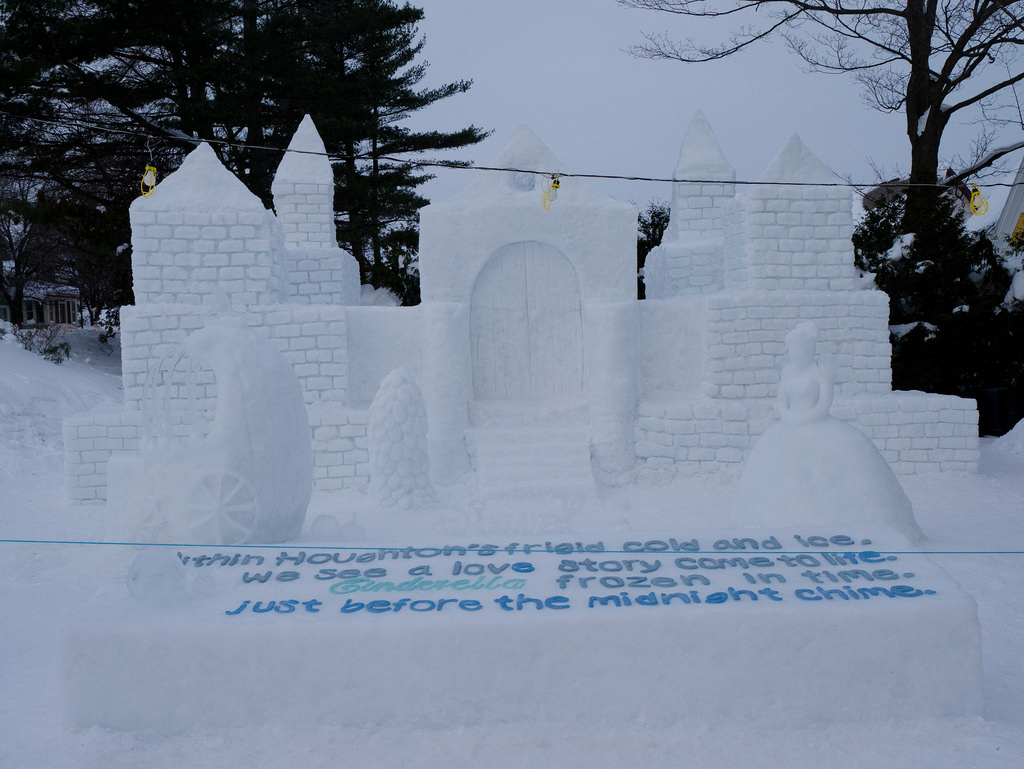 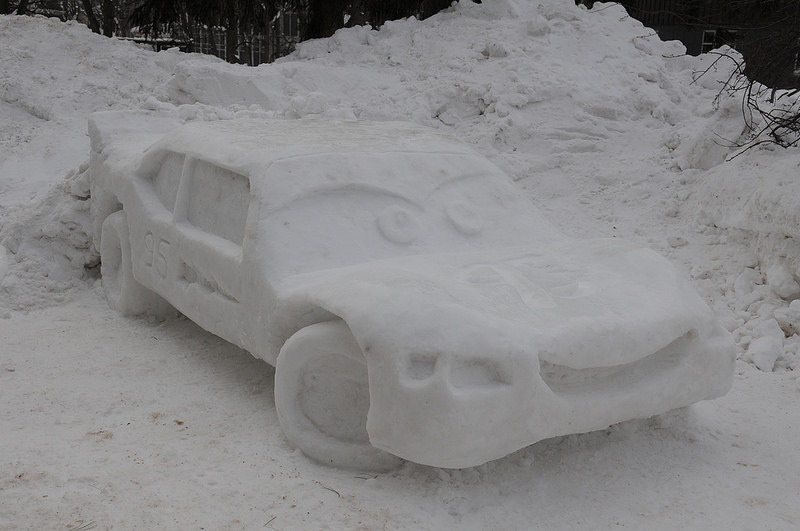 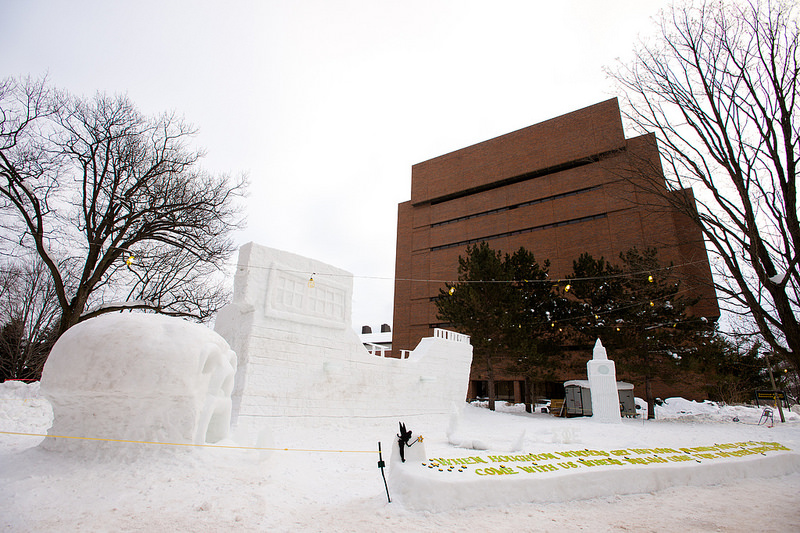 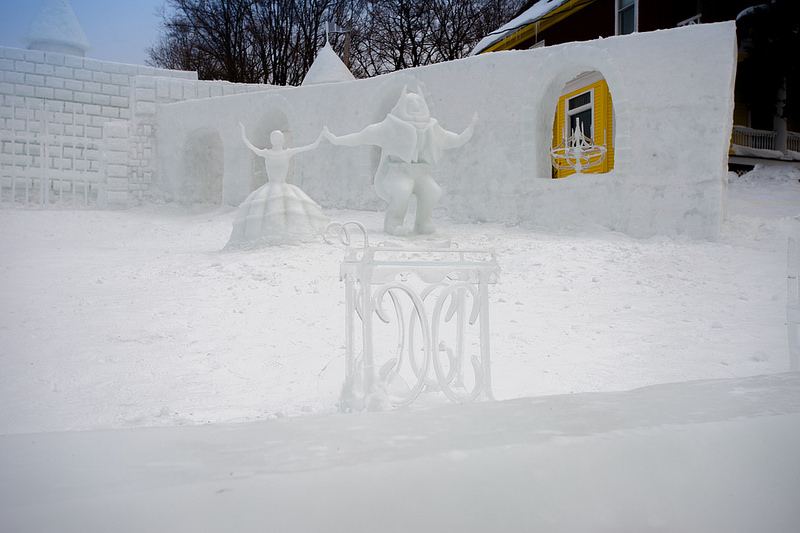 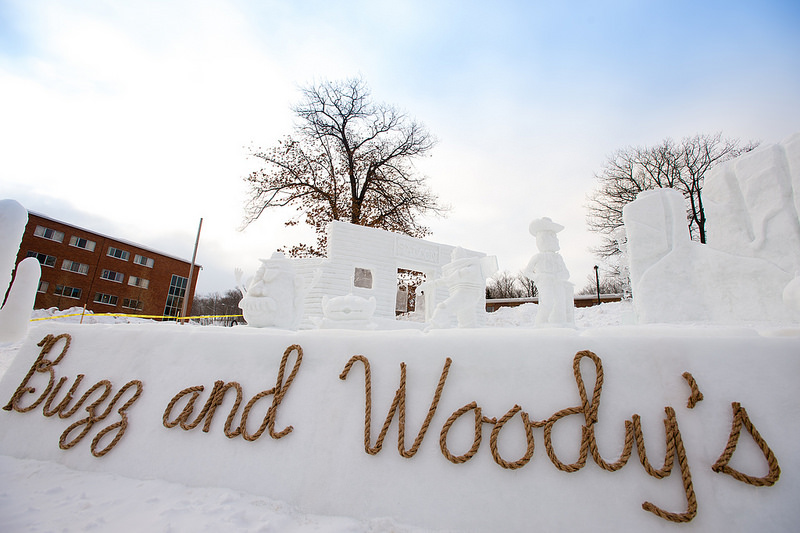 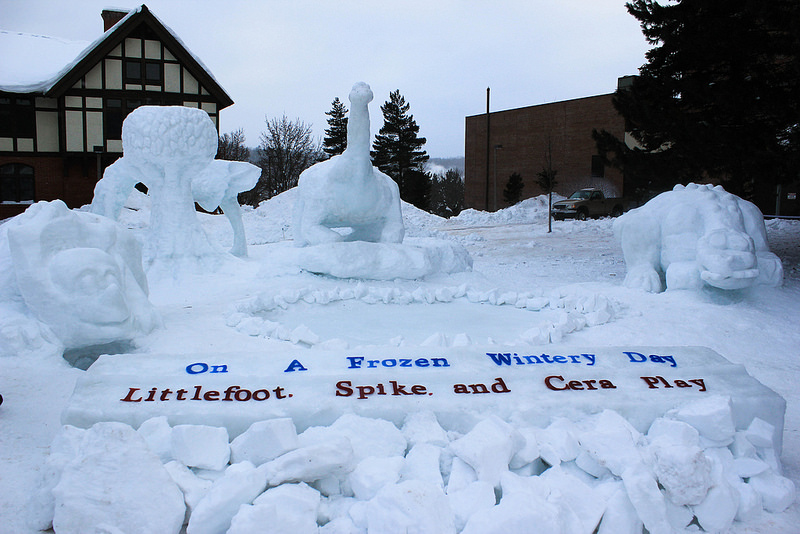 Touring the monthlong statues with the judges Thursday morning is always a blast, icy or otherwise. Usually, we scurry out to the sites, scribble notes, shoot photos, and get back on the bus. Fast.

At least that’s the way it was again this year. The temp was 4 degrees with a stiff 2o mph west wind. My camera actually froze up. But then, our photo crew, including plenty of student help, cover all the categories, including women’s groups, student orgs,  residence halls, community, and all-nighters.

It was nice to touch base with a couple of alumni judges, too. Lisa Fernstrum ’91 was a veteran of judging and was catching up with her children, Rachel and Jeremy, who are attending Tech. Jeff Sudderth ’06 was filling in for an alum who got stuck on his way up to Houghton. First Lady Gail Mroz ’86, was also judging and was getting a lot of help from granddaughter Stella.

This year’s theme, “Nostalgic Films of Childhood Days Come to Life in Frosty Ways,” had us all reminiscing about films from our childhood and from our children’s youth. 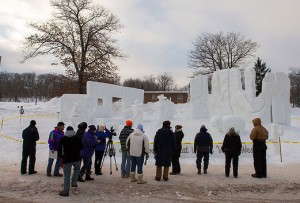 Judging the Delt Sigs, with some media coverage.

The Delt Sigs tribute to Toy Story was well done. Doors of ice looked like glass, and that wasn’t the only nice feature, ice or otherwise. They did their title in rope, which was by far the best we saw.Ben Maat, a second-year ME from Grand Haven, Michigan, watched the judges and was totaling the man-hours: just shy of 1,000. He was happy with it. Ready for sleep?

“My parents will be up in two or three hours, so I might just stay awake,” he said.

For ice features, however, it was tough to top winner Phi Taus and the second-place Tekes.  The Phi Taus’ take on Beauty and the Beast featured ice candelabra, weather vane, chains, serving table, and the topper: a rose frozen under “glass.” Michael Braun (who we met at the GLI and in the last TechAlum) said he had been up two nights in a row, and he said there were three alumni asleep in the house. The clever guys even had a snowmobile track lying on the ice bank to help us up, and the soundtrack from the movie was playing from the house. 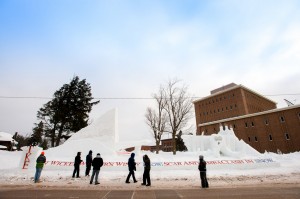 The Tekes and the Lion King.

The Tekes were outstanding again. Their Lion King had ice flames, animals, a monstrous mammoth, and beautiful lettering. All the ice animals proved challenging, according to Kevin Kyle, a third-year ME.

“We had four to five guys just working on them at the house,” he said. “Sometimes, you’d just get it immaculate, then they crack!”

Sig Taus had a nice nod to Iron Man. Their coolest features were a fin and eyes on the creature, and they had an ice windshield on an automobile. Ron Hagenbush, a second-year civil from metro Detroit was glad that they had thrown those features up in the last minutes.

After talking to Sig Eps’ Skyler Cavitt, he said, “Thank goodness! I can go warm up!” Their Peter Pan-inspired statue also had great lettering and two nice ice cannons.

Walking back to the office and taking in DZ’s Wizard of Oz, Air Force ROTC’s Jurassic Park, and Army ROTC’s Land Before Time, I was plenty cold.

It wasn’t long, though, before I had a surprise cup of hot chocolate delivered to me.

The Carnival spirit is alive and well.

You can view all the Carnival action here: http://www.mtu.edu/carnival/2014/gallery/

And the statue video is here: http://www.youtube.com/watch?v=gowYFeOiLHo&feature=em-uploademail

With a large and detailed snow statue based on The Beauty and the Beast, Phi Kappa Tau fraternity, located on West Quincy Street in Hancock, won the fraternity division of the month-long statue competition for the seventh consecutive year. Tau Kappa Epsilon’s tribute to The Lion King, next to the Administration Building, took second place, and . . . [ Full Story ]

Two Weeks Before He’s breathing hard as he thinks about it, winded. It’s cold. They’re all wearing ski goggles. “About ten minutes,” he pants. “That’s about the limit.” As the statue teams have been building throughout January, the morning sun—when we can see it—means the temperature is going to go down a few degrees, not up. The cloud . . . [ Full Story ]

by Sarah Kelly, student editor—When I step on campus at Wadsworth Hall, I can already hear the music that is pounding from the gigantic snow speakers where a DJ entertains a mass of excited students. There is an intense energy as I pass other peers.  Some are heading to their dorms, some are working on . . . [ Full Story ]

It’s shaping up to be a perfect year for the 15th annual SAE Clean Snowmobile Challenge, set for March 3-8. Michigan Tech, which hosts the event, is experiencing the snowiest winter in years with temperatures solidly sub-freezing, ideal conditions for this Society of Automotive Engineers collegiate design competition. Plus, a new major sponsor has donated an . . . [ Full Story ]

All is right with the world. The Alumni Cup has returned home to its rightful owners, us, after an impressive 12-0 victory Saturday night. The alumni team, Kilty as Charged, scored early and often, as the student team, Fellowship of the Rink, struggled to generate offense during the first outdoor Alumni-Student Broomball Invitational.

President Glenn Mroz and his wife, Gail, hosted a series of alumni happy hour events January 28-30 in Chandler, Glendale, and Tucson, Arizona. Alumni were able to make new connections, mingle with the president, and hear about what’s happening at Tech. The events were well attended with graduation years ranging from the 1950s to 2012.

Twenty-four alumni and Friends from the Dallas/Fort Worth Alumni Chapter attended a Dallas Stars Game on February 8.  Many thanks to Luke Gublo ’12 for organizing the event!

Jean Seaman Farnum was attending geology field classes with her professor father even before she began her undergraduate degree at Tech in 1939.Jean grew up in a family of geologists with her grandfather A.E. Seaman ’95 who not only taught at Tech but became head of the Geology department, her father Wyllys ’09 and her . . . [ Full Story ]

Michigan Tech will host the NCAA Central Region Ski Championships this weekend at the Nordic Training Center. The individual start classic is set for Saturday (Feb. 15) and the mass start freestyle is Sunday (Feb. 16). A live video stream will also be available both days at http://www.huskieslive.mtu.edu/.

Michigan Tech lit the lamp 10 times en route to the Winter Carnival title and a series sweep over Alabama Huntsville today. Blake Pietila, who had two goals and two assists in the 10-4 win and six total points on the weekend, was named Winter Carnival MVP. In all, 14 different Huskies had points including . . . [ Full Story ]

The Michigan Tech men’s basketball team won at Grand Valley State for the first time since Feb. 2003 with a 76-71 victory over the Lakers. The Huskies secured sole possession of second place in the GLIAC North Division standings with 11 3-pointers and 21 points from the free throw line. Tech entered the game tied with . . . [ Full Story ]

The Michigan Tech women’s basketball team shot a season-low 31 percent from the field and fell 72-64 at Grand Valley State on Saturday (Feb. 8). The Huskies scored 45 points in the second half and cut the lead to one but couldn’t overcome a 19-point first half. Tech started to chip away at the 13-point halftime . . . [ Full Story ]

That’s the old Memorial Union Building in the back, I believe.

Thanks, again, to Frank Agosti ’58 for this one.

Maybe you recognize yourself in here.

Hi Dennis,
In the article “Not Coldest, but Snowiest” you pictured one of the statues I worked on. That year, the theme was “Frightful Creatures with Chilling Features” and my sorority, Alpha Sigma Tau, did a scene from “Where The Wild Things Are.” I can’t tell who everyone in the picture is – most . . . [ Full Story ]

Dennis:
It appears this view is looking north. If so, the building on the left would be Hubbell Hall not Sperr. Sperr Hall was much further east. The building to the right should be Hotchkiss Hall but I can’t resolve my confusion between it and what was called the Shops Building. Until I researched . . . [ Full Story ]

We at the library thought you might enjoy looking at this project that we completed last semester:

I discovered this week that, after many years of solid progress, my firm, Barr Engineering, has finally reached the 50 Huskies threshold. We currently have 50 people on staff that earned at least one degree from MTU (that is not including any interns we might bring on board this summer). Is there anything . . . [ Full Story ]

Recently Lynne Shetron Rama e-mailed me the Alumni Newsletter wondering if I could pass on any info concerning a photo of a bunch a students watching a demo concerning the pre-chain saw way of sawing a log. I started my employment with Tech. at the Ford Forestry Center June 1966. Ross Miller held summer camp at the Center . . . [ Full Story ]

Dennis,
Our St. Paul Pioneer Press newspaper has a section called Bulletin Board which is comprised of reader submissions that are not in the ‘Letter to the Editor’ category, but more personal likes, dislikes, recollections, etc., that cover just about any subject matter. This submission of mine may be a bit too much for . . . [ Full Story ]

Initially, I missed the issue with the article about Dr. Pintar. In this current issue I saw some comments and had to go back and read it. He was an awesome professor who kept us challenged in all his classes. He was a very fun guy as well. I still remember our senior plant trip. . . . [ Full Story ]

Hi Dennis,
Not sure if this is appropriate for the newsletter but I wanted to share that my son was a guest of Michelle Obama for the State of the Union (SOTU) address. He is also the youngest intern to be hired by Intel. Here are links that feature Joe:

Hi Dennis:
Just a quick note to thank you again for all your efforts to keep the Alumni informed and involved.

Hi Dennis,
In 1964, being a Freshman at Tech and rooming in DHH I remember the Thanksgiving Break. It was the Wednesday before Thanksgiving and it was so warm we were going to class in tee shirts. That night is started snowing and when we returned to DHH on the Sunday, there was 3 . . . [ Full Story ]

Thanks for all your work on the newsletter. I’ve enjoyed reading it, but am writing for the first time. I am prompted by the email from Paul Hastings, which I read today (1/28). I don’t know Paul personally, but I also live in Rockford, IL and couldn’t agree more with what he said. . . . [ Full Story ]

Another great one from Joe Dancy ’76:

When you purchase a Michigan Tech license plate, not only do you show your Husky Pride, but you also support programs for alumni and students. For an additional fee, your Michigan Tech plate can be personalized. Don’t live in Michigan? Then you need a collector Michigan Tech license plate! Whether you purchase a regular plate or collector plate, a portion of the purchase fee is given to the university. To order visit: http://www.michigan.gov/documents/orderform_mtu_16221_7.pdf