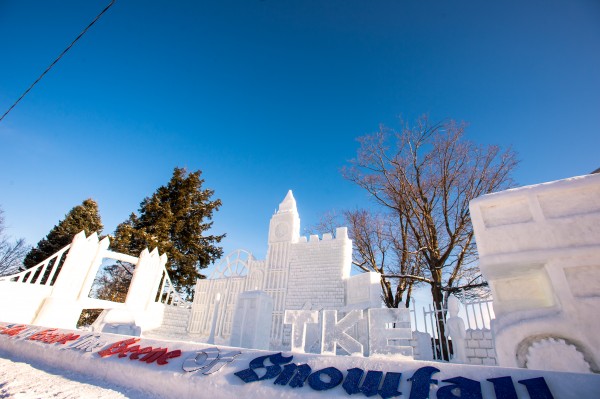 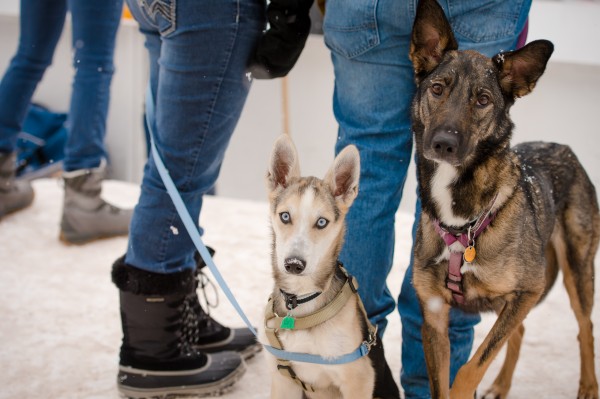 Even the dogs had a good time when alumni took to the broomball rink. 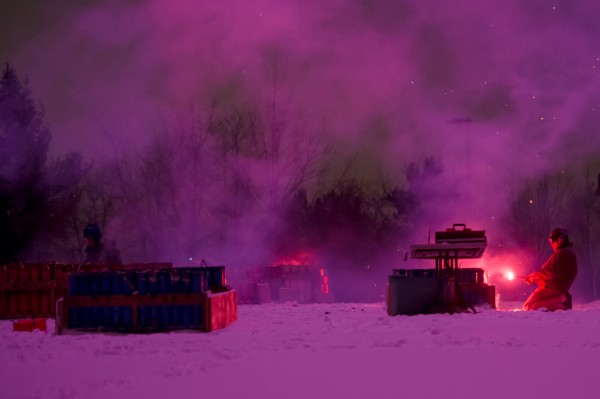 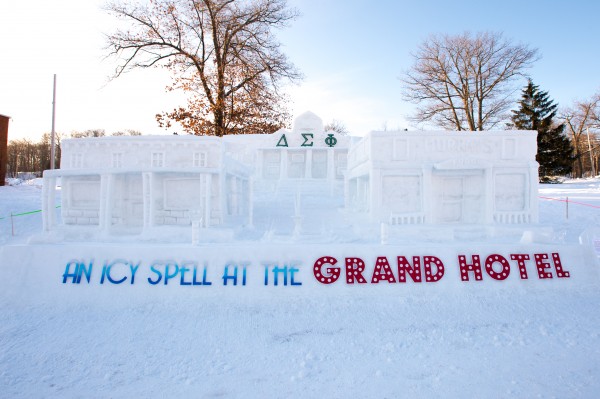 A Michigan landmark dressed up in ice

The statues have that thin layer of snow on them from a few days of lake effect. The details pop back into view with a good gust of wind, but it’s the statues and the memories that remain of Winter Carnival 2015.

I could poll a thousand people, and none of us had the same Carnival. For me, everything centered around the All-Nighter. This is the third year I’ve worked through the night, cold fingers pecking away at a keyboard while trying not to fall on my face on the slick sidewalks. I have the easy job, of course. I’m not working frantically on a statue, outside for long stretches, able to hear the party but having to work. It must be what working at a theme park is like.

No, my job was definitely the easy one: go out and experience it and try to convey that with a jumble of consonants and vowels. We did a live blog of the All-Nighter this year, something we hope to be doing more of in the future. I want everyone to feel like they’re here, whether they can make it or not.

The hardest thing to convey was the temperature. It was a cold one this year, and unless there is some USB peripheral that lets me shoot air off of Lake Superior at you, you’ll have to rely on memory. The highest temperature I saw while out there was 5 degrees Fahrenheit. The wind tunnel next to the EERC was just as you remember it. In other words, all in all, a great time.

My tally for Winter Carnival this year also included curling and broomball. I’m annoyed I missed the Student–Alumni Invitational on Saturday night, though. I got caught up in the torchlight parade and fireworks—and being next to a toasty-warm fire—and not having eaten dinner yet at 830. Really kicking myself, because with eight teams, it was a great time.

So we wait another year for this to come back. A year of 10pm sunsets at McLain and paddling at Great Sand Bay. A year of mountain bikes and those blasted flies. There’s a lot of good stuff between now and the next All-Nighter. But just like the day after Christmas, I wish time would go quickly so we can get that feeling back again. The spirit of Winter Carnival as well as the feeling in our extremities.

Today? Well, the sun was out for a bit, and they shaved the streets back, the remaining banks looking like wintery agates. We have a winter weather advisory, standard fare for mid-February. I’m hearing rumblings about Spring Break destinations. It isn’t completely dark when I get into the office. Next week is Career Fair, so there’s an entirely different buzz around campus. We’ll welcome many of our alumni back to campus, representing companies and industries up at the SDC. It’s not looking like we’ll have a repeat of the blizzard from last year. Probably not. Maybe.

Some interesting stories from around Tech down below. Marcia Goodrich’s piece on the North American plate is brilliant, and Suzanne Van Dam’s work on glacial cave diving reminds us that H2O has a liquid form. I’ve also included the piece I wrote for this year’s All-Nighter; in case you couldn’t be here, it’s hopefully a small taste of home. As always, hit us up for the mailbag at techalum@mtu.edu. See you next time.

It’s easy in the daylight. In the summer. It’s easy when it’s 75 degrees and sunny. Simple.

But neither is Michigan Tech. Chemistry class isn’t easy. Senior design isn’t easy. We aren’t out at night . . . [ Full Story ]

North America traveled in fast company back in its youth.

While it may not seem to be shattering any speed records, that’s twice . . . [ Full Story ]

Soft spoken and with the wiry frame of an avid outdoorsman, Jason Gulley’s eyes light up when asked about caves.  “They have a mystery around them,” he says.  “Even with the oceans we know where the deepest parts are, but with caves, you never know how long or how hard it’s going to be to . . . [ Full Story ]

The student broomball team, Big Bird, claimed the Alumni Cup in this year’s Alumni-Student Broomball Invitational held over the Winter Carnival weekend. Eight alumni teams from across the country came back to campus to compete in the annual tournament, and although only one team can be victorious, each team had a good time getting back . . . [ Full Story ]

The 2015 Winter Carnival All-Nighter brought below subzero windchills and blustery conditions, but that didn’t stop a great group of volunteers from serving 500 mugs of hot chocolate at the Alumni House and 100 gallons of chili from the back of a utility truck for the Jon Davis Chili Run to the cold spectators and . . . [ Full Story ]

Alumni, friends and family from the West Michigan Chapter gathered for the 10th year for a buffet breakfast at Marie Catrib’s restaurant in Grand Rapids. As usual they had a full house for this popular event. It was a good opportunity to get to know other area alumni and share interesting stories. Many thanks to . . . [ Full Story ]

The National Society of Black Engineers (NSBE) is one of the largest student-governed organizations in the country. This project’s goal, posted to Superior Ideas, is to support Michigan Tech’s NSBE members in attending the 2015 National Convention in Anaheim, CAMarch 25-29.

Mission: Build a Great Northern Railwayby Jennifer DonovanPasi Lautala ’97 ’07 knows about cold climates. He’s from Finland, where it snows much the way it does in Houghton. He knows what arctic temperatures and freezing or thawing ground can do to railroad tracks and ties: heaving them, twisting them, turning them dysfunctional in a dozen . . . [ Full Story ]

HOUGHTON, Mich. – No. 5 Michigan Tech defeated Bemidji State 2-1 on Saturday (Feb. 7) to sweep the WCHA, and season series, against the Beavers. The Huskies won the MacInnes Cup for the third year in a row, and senior defenseman Riley Sweeney was named Winter Carnival MVP.

ALLENDALE, Mich. — Michigan Tech snapped Grand Valley State’s 11-game home winning streak and extended its own overall win streak to 11 with a 57-41 victory at GVSU Fieldhouse today. The Huskies held the Lakers to 29 percent field goal shooting to claim their 20th victory of the season.

No. 8-ranked Michigan Tech dominated Alabama Huntsville with an 11-1 win on Saturday (Jan. 31) to sweep the WCHA series. Senior co-captains Tanner Kero and Blake Pietila both recorded their 100th career point in the game. Kero had two goals and two assists, while Pietila racked up three assists.

Rankings as of February 10:

Here’s a Stage Revue photo from 1950… recognize anyone here? Or where this is?

Or, share your own Stage Revue memories with us! While we’ve had a disappointing haul from the Tony awards, we still think this is what Broadway should be.

I asked for some of your favorite spots in town and learned more about Houghton bar history than I ever knew existed. Thanks! Let’s spread out a bit, then. Here’s a shot of the iconic Michigan House in Calumet. I manage to get there about once a month, grab a panini, and soak in the . . . [ Full Story ]

Kevin,
Steve Pribish’s mention in this week’s Email Bag about how much Shelden Avenue has changed sent me searching for the this picture that shows Shelden Avenue looking west from the College Avenue curve. I took this in May 1970. Sure looks different today!

Welcome to the newsletter.

Here in Knoxville we have about ¼” of snow I remember the winter in Houghton so we need at least 6” of snow here before I acknowledge it.

I’m saddened to learn about the passing of Dr Greuer. Please pass my condolences and prayers to his family.

He taught ventilation and thermodynamics to me in 1971. He always had a twinkle in his eye and was a devoted professor who wanted his students to do well. He helped me get through the course . . . [ Full Story ]

This is in response to the article on the sweaters.  Three of my sorority sisters (Theta Chi Epsilon) are in the photo (Ruth Oake McLeod, Sparkle Harrington Worley and Julianne Hubbard Benson)  I forwarded this email to the 3 of them in case they were not on . . . [ Full Story ]

you have big shoes to fill but you have a number of weeks (years) to grow into them. everyone out there is wishing you well.

as a member of the class of ’61 and graduating in ’63 with a degree in metallurgical engineering i find it interesting that there is such a thing . . . [ Full Story ]

We’ll see if this gets through.  Congratulations on your new position.

I tried the route through the article and it goes to Microsoft email.

Even though I am a Tech Engineer, I am no fan of social media, etc. however wanted to comment on what appears to be missing from many Winter Carnivals in recent . . . [ Full Story ]