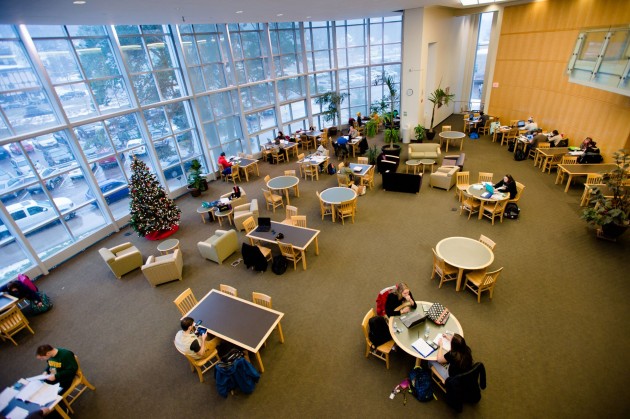 Another year over and another semester of finals complete. 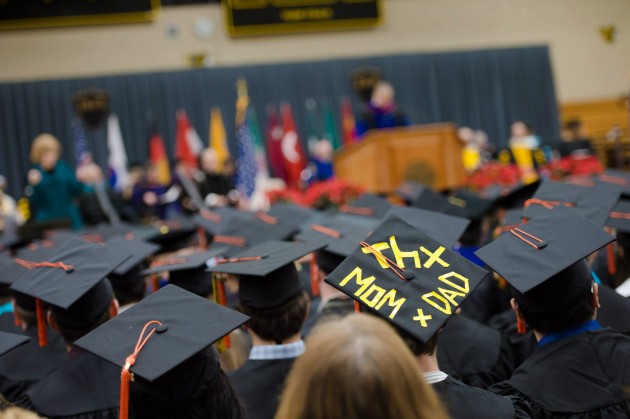 Hundreds celebrated as they take their next steps as Michigan Tech Alumni.

Catch the hockey highlights of Tech vs. Michigan at GLI

I am on medical leave for a while. I will miss you all, but a group of stellar Michigan Tech personalities have stepped up to write guest columns while I am away.  Today, Director of New Media for the Office of Athletic Communications Calvin Larson writes about the history of the GLI. —Dennis

Michigan Tech hockey coach Mel Pearson etched his name into the lore of the annual Great Lakes Invitational even before the No. 5-ranked Huskies took to the ice for the 50th edition on Dec. 28-29, 2014.

The Huskies outplayed Michigan in the semifinal but were steered away by a hot goaltender, falling 2-1. In the GLI third place game, the Huskies’ offense came alive as the Black and Gold defeated Ferris State 4-2.

Pearson is in his fourth season on bench and has 57 wins as the leader of the Huskies, ranking him fifth all-time at Tech. Three more victories will move him to fourth and nine more to third.

The coach has a storied past with the GLI, played annually at Joe Louis Arena in Detroit, and hosted by Michigan Tech. He is the only person to win the tournament as both a player and head coach and has been a part of 17 GLIs as a player, assistant coach and head coach.

As a player at Tech in 1979, Pearson buried a championship-winning goal for the Huskies 2:28 into the third overtime to end the longest game in GLI history. The goal gave Tech a 5-4 win and its fourth GLI championship in a row.

“I tell people it was my first shift of the game,” he said. “Everybody else was so tired they finally decided to put me out (laughs). But no, it was one of the highlights of my college career and experiences as a player.

“The only thing I remember is when we got back to the Renaissance Center, it was so late in the night the only place we could get food was from room service. We were all broke, cheap college kids and room service at the Ren-Cen wasn’t cheap (laughs). We had to pay 16 dollars for a hamburger.”

Pearson was an assistant coach under Red Berenson at Michigan, where he helped the Wolverines to a 667-243-71 record, 11 Frozen Fours and two national championships. The Maize and Blue also won 12 GLI titles during that time, including nine straight from 1988-96.

At the 48th annual Great Lakes Invitational in 2012, Pearson led Michigan Tech to its first championship since 1980, his senior season as a Huskies player.

“The GLI is a very special tournament, not only for me, but I think for all Michigan Tech fans in general,” he added. “It gives us an opportunity to showcase our team to a lot of our alumni down in southeast lower Michigan who don’t have a chance to come up to the Upper Peninsula to see us play.

“It’s one of the, if not the, premier college hockey tournaments in the country. It’s played in a great venue with a lot of history and with very good teams.”

This year’s field of teams consisted of schools exclusively from the state of Michigan for the 12th time. Michigan took home its 16th title with a 2-1 win over Michigan State and pulled the GLI banner up to the ceiling of Joe Louis Arena.

“I think they did a real neat thing a few years ago where they put a banner up there for the GLI champions that hangs in the rafters at Joe Louis Arena all year,” said Pearson. “I think that’s another incentive to want to win it.”

“I played when it was in the Olympia (Stadium), so that’s how old I am,” Pearson said. “I think it’s just like hockey in general. The players, the pace of the game. The game itself has become so much quicker, so much more skilled. The players are so much bigger. I think the event has really grown. It’s just become a premiere event.”

Tech has claimed the MacInnes Cup 10 times in the tournament’s history. This season, the Huskies started unranked in the preseason polls but climbed all the way to No. 1 with a 10-0 start—the best in the team’s 94-year history.

Like it is every year, the 2015 edition of the GLI will be circled on the calendar, and a preseason team goal of the Huskies will be to win it.

“It’s a feather in your cap,” Pearson said. “It’s just confirmation that you can play with some of the best teams in the country. Also, we’ve always used it as a springboard into the second half of the season because it really does start the second half of the college hockey season. We always talked about getting off to a good start, and winning that tournament can really give you a push toward that second half. It’d be huge for our school.”

Though the Huskies didn’t claim the 50th GLI title, they did walk away with the confidence they need to jump-start a second half of the season that could lead them to the NCAA Tournament. Coach Pearson didn’t win a NCAA Championship as a player, but he has goals to win one as a head coach.

For the hundreds in the hallway of the SDC, today will be a day long remembered. In pictures, in video, and in the memories of everyone gathered here in the Wood Gym, images of today mean something. There are an infinite number of snapshots. Before they leave for, well, not for good, but for their . . . [ Full Story ]

Gov. Rick Snyder has announced the appointments of Brenda Ryan of Commerce Township, and William Johnson of Newaygo to the Michigan Technological University Board of Control. The eight-person board is the governing body of the University.

At its regular meeting on Dec. 19, 2014, the Michigan Technological University Board of Control applauded the accomplishments of retiring Board members Lenora Ashford and Steve Hicks. Ashford and Hicks are finishing 8-year terms on Dec. 31. Last week, Gov. Rick Snyder appointed two new Board members to take their place: Brenda Ryan and William . . . [ Full Story ]

As we approach the end of the 2014 calendar year, we want to take a moment to remind our alumni and friends that there is still time to make an annual contribution in support of Michigan Tech—and receive a 2014 tax deduction on your federal tax return (if you itemize.)

By donating their time and talents to the Michigan Tech Alumni Association this group helps drive the mission of Celebrating Traditions and Creating Connections.

Many thanks to this outstanding group of volunteers!

The newly formed Fox Valley Chapter hosted their second event this year at the Appleton Beer Factory.  More than 40 alumni and friends can out to socialize and reminisce.  Many thanks to Chapter Leader Leah Enking ’10 for organizing the event!

The Rekhi Enterprise Funding Challenge is a competition for participating Enterprise teams. There are 8 teams competing for up to $ 10,400 in prizes. The team who raises the most money will receive a monetary match. The competition ends December 31.

Mr. Bruce L. Oliver was born in Ypsilanti, Michigan in 1941. He later moved to Clinton, MI where he was Valedictorian of his high school class in 1959. He then attended Michigan Tech receiving his BS in Chemical Engineering in 1963.Bruce joined the Dow Chemical Company immediately after graduation. Bruce spent his career at Dow . . . [ Full Story ]

The No. 5-ranked Michigan Tech hockey team defeated Ferris State 4-2 in the 50th Great Lakes Invitational Third Place Game on Monday (Dec. 29) afternoon. In the third meeting between the two teams, it was the Huskies jumping out to a 4-0 lead and holding on to improve to 14-4-0 overall.

White, originally from Ormstown, Quebec, racked up 93 points on 20 goals and 73 assists from the blue line and ranks sixth all-time in defenseman scoring at Tech. He was a . . . [ Full Story ]

Our broomball teams have had some infamously “punny” names over the years. What’s the best you remember? Let us know.

When students come back from winter break, they start toiling away at their Winter Carnival statues. How did your hall, fraternity, sorority, or group plan your statue? On the fly? Detailed blueprints (or whiteprints, maybe)? Share your story.

Congratulations on the great team and the high ranking in the league.

Liked the ‘drop the puck and kick it back up’ movement by Heinonen.

Elwin “Doc” Romnes used to show us that move after he replaced Eddie Maki as the Tech Coach. He used the move when he was with the Blackhawks in the Stanley Cup finals . . . [ Full Story ]

I spent almost every summer (B term) in Houghton while I attended Michigan Tech. Those were the best summers of my life! I remember having class Monday through Thursday, with Friday being our day off. Fridays I would sleep in, have a late breakfast, and by noon, I was on the beach. Usually, you could find me at Hancock beach, . . . [ Full Story ]

I was reading the latest Michigan Tech Magazine and I realized I don’t think I notified Tech of the latest addition to my family. Connor John Doyle was born 2/25/14. Looking forward to bringing him and my oldest son Landon to their first GLI hockey game in a couple weeks!

In the December 16, 2014, edition, you asked: “Did you send a legacy student to Tech, or were you one yourself? Tell us your story.” So here is my story.

I had two legacy students graduate from Michigan Tech as well as a son and daughter in law.

The New York Times published a great article about hockey in the Copper Country. Thanks to Bob Wicklund ’69 and Anton Usowski ’60 for sending it along.