Mitch's Misfits in Alaska with huskies. We took 5 out of 8 points over the past two weekends. 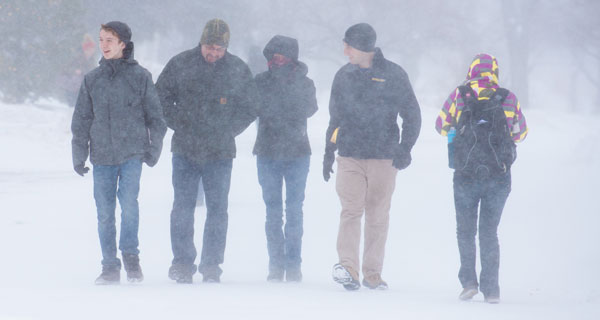 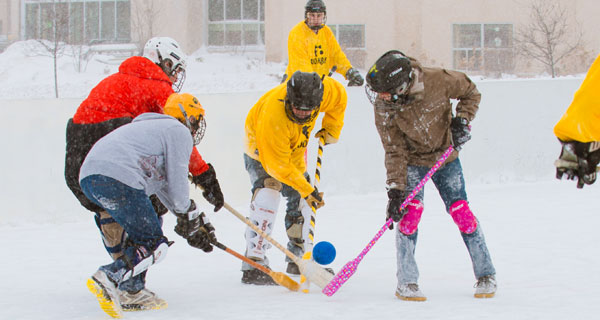 Never too cold for broomball. 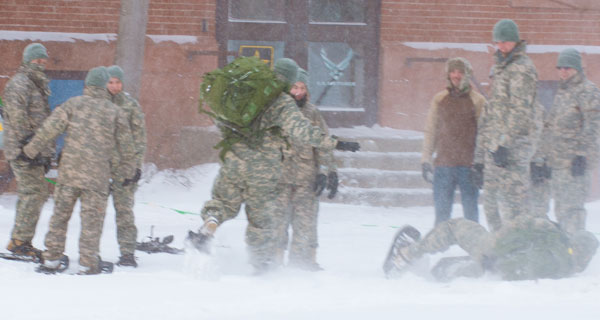 I know this feeling. 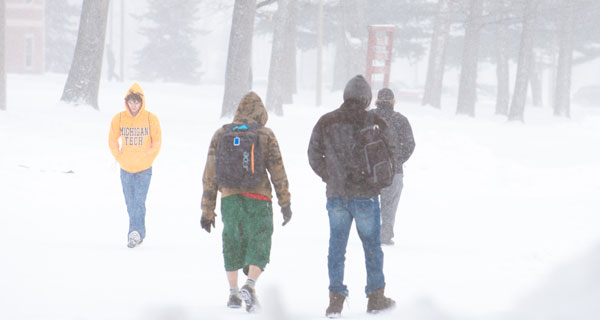 His blood must be thicker. 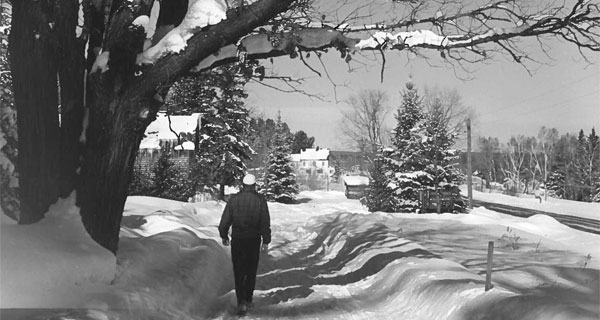 It can be beautiful, too. US 41 before campus. Joe Kirkish photo. 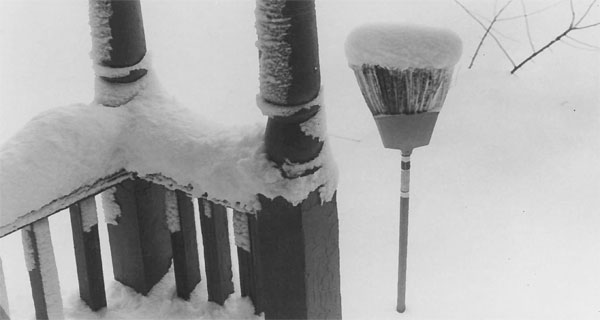 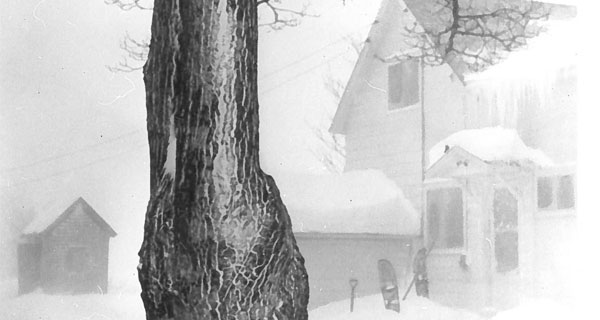 Snowshoe to campus if need be.

The debates have raged in the past. When did we close? Is there always a Thanksgiving Break storm? When were the worst?

We’ve been “lucky” enough to live through more than a few of these.

We drove through campus once and couldn’t see the buildings from the road. A friend pulled into our driveway for Thanksgiving and was shaking from “white-knuckling it” from Marquette. We’ve seen it blow so hard the snow was shooting up as it was hitting the house. The front door was frozen shut by the dandy ice-snow mix. And then there’s “thunder snow,” which is just wrong. 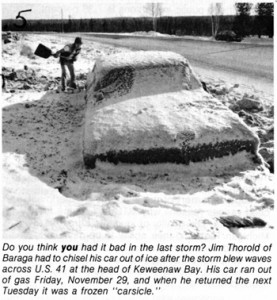 We had a decent storm come blowing in right after most of our students left for Thanksgiving break, thank goodness. It was more cold and wind than snow.

And how about those walks across campus? Heading back into the (usually) west wind, I often take the indoor route: cut into Fisher as soon as I can, take the new skywalk from Rekhi Hall to the library, shoot out the main entrance racing along the building toward the MUB, and leave via the northwest stairway, closest to the Ad Building.

On the other side, going the other way, I’ll use the side entrances on the MEEM, ChemSci, and EERC, before cutting through the new Dow Building into Dillman, then the M&M. DHH is then fairly close, or just tough it out to the Walker and Rozsa.

And, as for closing Tech, many of you have contributed to a great piece of Tech history. I’d love to hear more of your winter storm stories.

Interviewing an alum on the phone recently, I started to complain about the winters up here.

“How long have you lived there?”

I got the point.

We’ll grumble, scoop, snowplow, shovel, and survive like we always have, still lucky to be here, and we’ll also celebrate our great family traditions. We had a new addition to our Thanksgiving table this year. Two months old, she tells me she’ll like the stuffing and dark meat the best, like her grandpa.

Yes, the leaves are still there (until May).

If you ask an eighth or ninth grader what a scientist really does, you’re likely to hear plenty about wearing lab goggles and white coats, watching bubbling beakers, and preparing microscope slides. But besides surface-level attributes, many students have trouble explaining what being a scientist actually entails.

More than 100 local schoolchildren no longer go hungry over the weekend, thanks to 31 Backpacks. But despite its good works, the local charity has been struggling to raise awareness—and funds. What it really needed, thought founder Laurel Maki, was a good website.

By his barren office in the Great Lakes Research Center (GLRC), one can tell that Pengfei Xue is new to campus. The assistant professor in civil and environmental engineering just started Oct. 1, but he’s already hard at work, beginning to model Great Lakes and coastal US regions using Superior, Michigan Technological University’s new supercomputer.

Since its founding by Michigan Tech in 1965, the Great Lakes Invitational Hockey Tournament has brought thousands of Michigan Tech Alumni, Husky fans and friends together for one of the greatest traditions in college hockey.  This year the tournament will lead off five consecutive days of hockey at Comerica as part of the Sirius XM . . . [ Full Story ]

The Michigan Tech Annual Fund invites all alumni and friends of the University to join them in celebrating #GivingTuesday today, December 3, 2013.

#GivingTuesday is a campaign to add a new date to the national calendar that celebrates and encourages giving for important causes everywhere. The date for #GivingTuesday was chosen to coincide . . . [ Full Story ]

FAIRBANKS, Alaska — Michigan Tech earned a WCHA road sweep of Alaska with a 2-1 victory at Carlson Center tonight. Goaltender Pheonix Copley stopped 28-of-29 shots, and the Huskies scored two special teams goals to move to 6-8-2 overall and 4-3-1 in league play.

PITTSBURGH — Former Michigan Tech hockey player Chris Conner (2002-06), playing in his third NHL game this season, scored his first goal of the year Wednesday (Nov. 27). The Westland, Mich., native scored 1:57 into the game, and Pittsburgh went on to defeat Toronto 6-5 in a shootout.

“We only had a few student-athletes competing this weekend, but they were satisfied with their results,” Tech assistant coach Andrew Joda said. “We look forward to more competitions as the season begins.”

This class was doing “AT testing,” whatever that is.

Dennis,
Back in the day, the MTU Sports Car Club would put on a time, speed, distance rally in the spring, with much help from Jon Davis. The Rally would start and end at the Library Bar. Jon, always interested in introducing new people to the sport of rally, would teach a rally school . . . [ Full Story ]

Dennis -
I spent a summer term at Tech in 1963. I don’t think I ever had as much fun in the Copper Country as I did that summer. But I distinctly recall going down to the Cohodas-Paoli dock every Tuesday at 5:30 when the SOUTH American came in. They had about a two . . . [ Full Story ]

Dennis
Usual good newsletter.
I wonder if a easy link to weather on the newsletter is something you had considered.
This idea came up when I was reading the NL and preparing for a trip next week to the CC.
Thank you.

I think these guys are right. Those steps were rarely used but I did have my wedding reception on that balcony.

You can enjoy Husky Blend Coffee with your Husky friends and classmates while you support your alma mater. Over 40 percent of all proceeds will go directly to the Michigan Tech Alumni Association in support of events, programs, and services for YOU—our alumni, students, and friends.

Husky Blend Coffee comes in a wide variety of flavors and is available in 12 oz. bags and 2 oz. travel packs. Event, Party, or Wedding Favors Husky Blend Coffee is packaged in many different ways to suit the needs of your event. Whether you are looking for a small party favor or entertaining a few hundred guests at your event, Husky Blend Coffee will be perfect for you! Try some today! Visit http://www.gocoffeestore.com/Michigan-Technological-University_c28.htm and place your order.