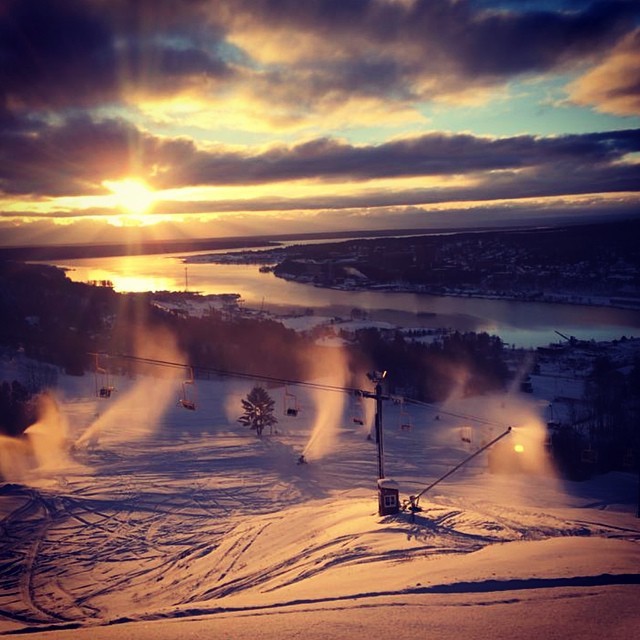 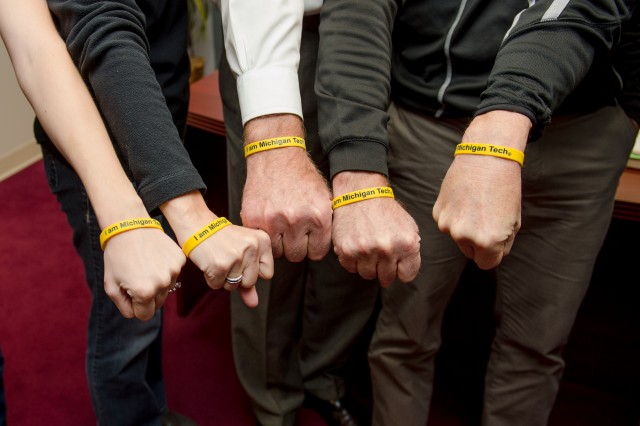 Showing our Husky spirit for #GivingTuesday 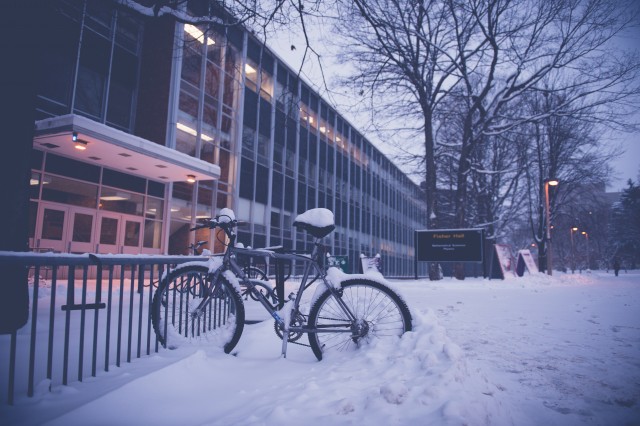 Even as the snow piles up, intrepid students bike to class.

I am on medical leave for a while. I will miss you all, but a group of stellar Michigan Tech personalities have stepped up to write guest columns while I am away. —Dennis

It may only be the dawn of December, but the snow piles are growing ever larger here on campus. November brought more than 40 inches—that’s a lot of white before Thanksgiving.

November may have come in like a lion, but thankfully it went out like a lamb. Students driving back to campus last weekend were treated to warmer-than-average downstate temps and mostly-clear roads, even through the Yoop.

Of course, it got us thinking about those less-tame commutes from Thanksgivings past. Closed bridge. Whiteouts. Stalled vehicles that get abandoned and become “carcicles.” Surviving four or five years of Thanksgiving travels seems to be a badge of honor for Tech alums.

Tom Johnson ’86 wrote to us about the Thanksgiving drive of ’85, when the highway alongside Keweenaw Bay was “littered with logs that had washed across the road.” He says that the eight-hour trip from downstate turned into twenty-one hours thanks to Mighty Mac and US-41 closings; he and his travelers spent the night at the L’Anse American Legion hall until the roads could be reopened.

“Without a second’s hesitation, it’s my most vivid memory of Thanksgiving while attending Tech,” Tom says.

John Baker ’71, who survived the Thanksgiving commute of ’66, considers himself one of the lucky ones because of a smart route and a buddy with an old Corvette equipped with posi-traction.

“The snow storm struck just as we were crossing the Bridge,” John says. “We went up the 117, away from US-2, while most people continued down to 77. We managed to get through without any real problems. My brother left a half-hour later than me and took the 77 route. He was forced to spend a couple of nights in some restaurant/bar between Blaney Park and Germfask, as the road was completely blocked.”

Do you have a Thanksgiving commute survival story? Send us a message and tale us your tale.

The expanded programs will enable more students to . . . [ Full Story ]

Did you know Michigan Tech had its own comic superheroes? Tech Team, created by Norman Breyfogle, saved our campus once in the handcrafted comic strips; and now they sit preserved and maintained in the Michigan Tech Archives for viewing as one of many unique items preserved there.

The Michigan Tech Annual Fund and the Student Philanthropy Council invite all alumni and friends of the University to join them in celebrating #GivingTuesday today, December 2, 2014.  #GivingTuesday, following Black Friday and Cyber Monday, celebrates and encourages giving for important causes everywhere.   For more information go to http://givingtuesday.org/.

The flakes are flying, and we Huskies couldn’t be more excited that the season of snow is upon us. Do you think you know what Heikki Lunta has in store for us each month and for the entire 2014-15 season?

As we approach the end of the 2014 calendar year, we want to take a moment to remind our alumni and friends that there is still time to make an annual contribution in support of Michigan Tech—and receive a 2014 tax deduction on your federal tax return (if you itemize.)

Huskies from all across the south gathered in Huntsville, Alabama to cheer on the team as they dominated the hockey series against The University of Alabama at Huntsville. At the Saturday evening game, it seemed as though there were more Huskies in attendance than local fans as the arena was filled with black and gold . . . [ Full Story ]

Alumni and friends from the Northwest Michigan Chapter picked up their brooms and hit the ice for a fun evening curling! Volunteers from the local Curling Club helped with safety and instruction, they also had some trivia questions about curling to help learn the terminology.  After 2 hours on the ice they finished out the . . . [ Full Story ]

The Rekhi Enterprise Funding Challenge is a competition for participating Enterprise teams. There are 8 teams competing for up to $ 10,400 in prizes. The team who raises the most money will receive a monetary match. The competition ends December 31.

Bhakta Rath '58 has used his Michigan Tech education to reach great heights, achieve honors at the highest levels, and sponsor important initiatives.He was awarded the 2009 Padma Bhushan from the Indian government, its second highest civilian award. Established in 1954 by the president of India, it recognizes distinguished service of a high order to . . . [ Full Story ]

No. 5-ranked Michigan Tech ended both the second and third periods with a pair of goals and swept Alabama Huntsville with a 5-2 win Saturday (Nov. 29) at the Von Braun Center. Five different Huskies scored as they improved to 12-2-0 overall and 10-2-0 in the WCHA.

Michigan Tech improved to 3-0 with a 75-56 victory over Wayne State (Neb.) today in day two action at the Southwest Minnesota State Classic. Ben Stelzer scorched the nets for 32 points, and the Huskies turned the ball over just three times to beat their third straight Northern Sun Intercollegiate Conference opponent in as . . . [ Full Story ]

Kelli Guy buried seven 3-pointers to help Michigan Tech overcome a 25-20 halftime deficit and win 70-61 over Minnesota State today at the SDC Gym. The Huskies put up 50 points in the second half with 19 coming from Guy to improve to 3-0 on the season.

Did you do your late-night schoolwork in the library when the reading room looked like this? Email us.

Recognize either of these two studiers? Let us know.

I stayed on campus one Thanksgiving and was invited to the Newman House for dinner, which I was warned was going to be squab that had been hunted by the current residents. Okay, I thought, except the birds still had the buckshot in them. I had never cooked squab before, but I thought since they . . . [ Full Story ]

Just had to share the fact that Joshua Pearce, head of Michigan Tech’s Open Sustainability Technology Lab, was quoted in an article in my husband’s union paper, The Electrical Worker. In the August 2014 issue there was an article titled “The 0 Freedom Machine.” The article was about a retired New Orleans IBEW Local 130 member, . . . [ Full Story ]

Visit our Career Tools or contact the Career Center (906) 487-2313 career@mtu.edu for more information.