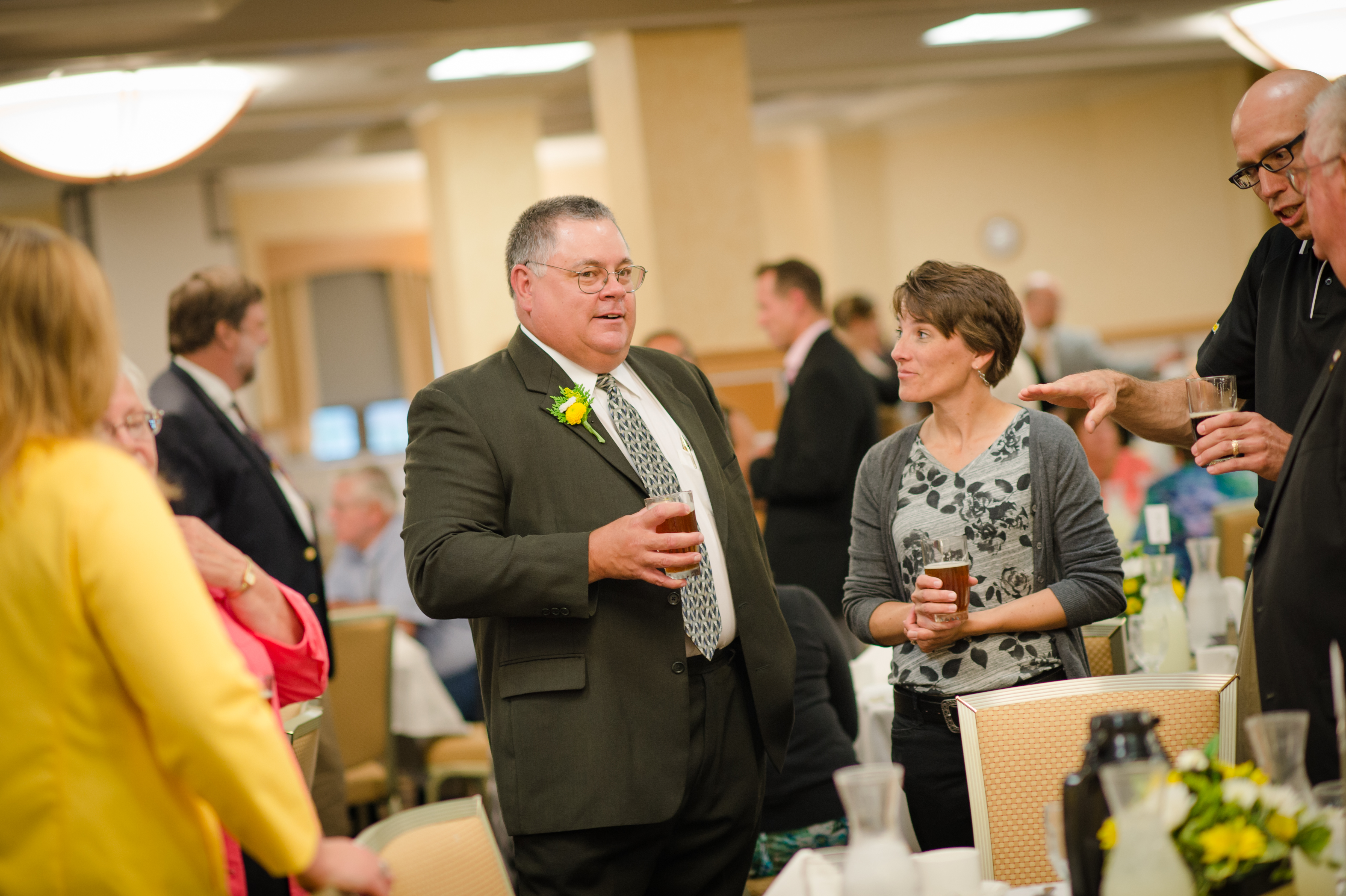 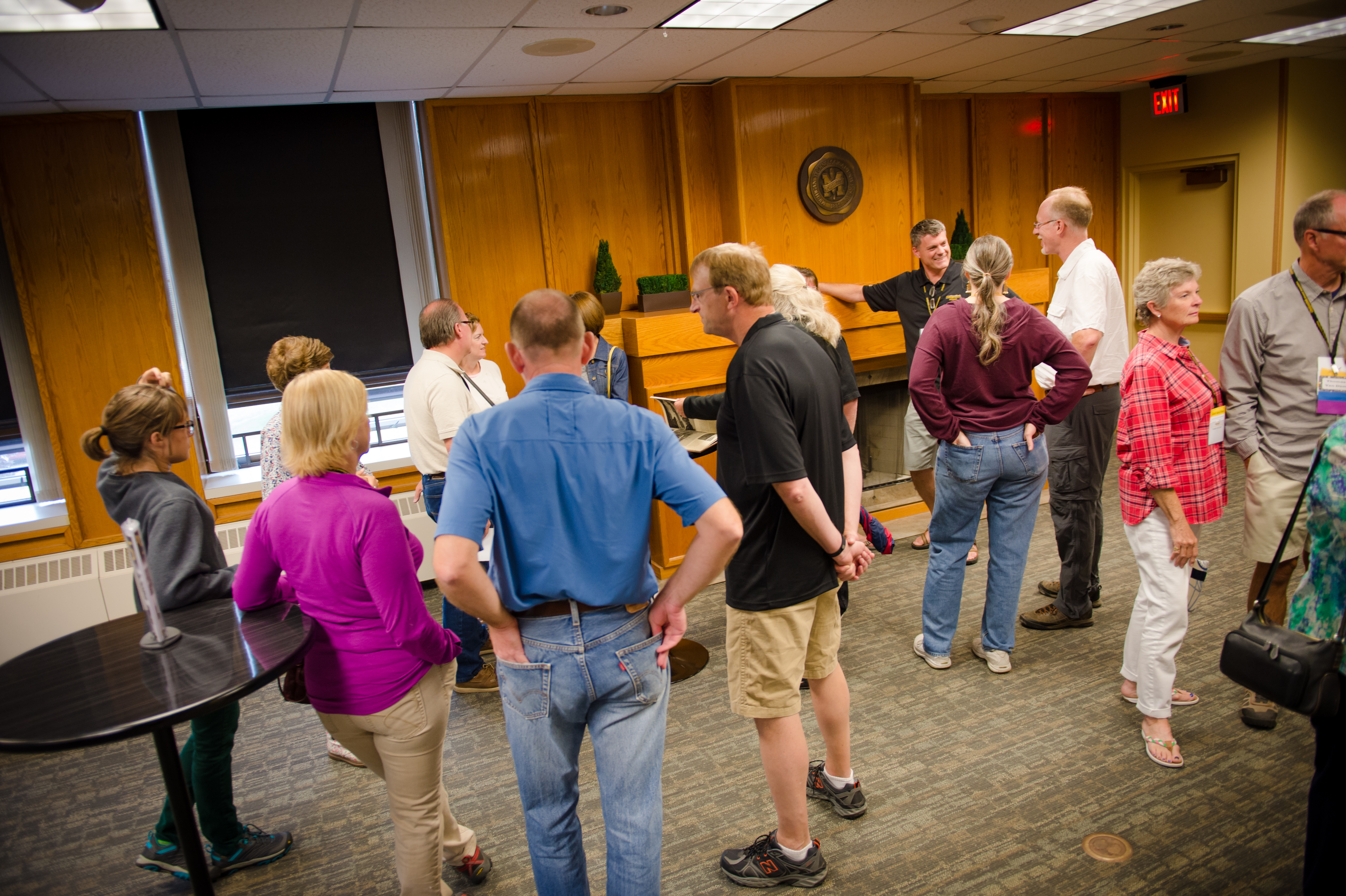 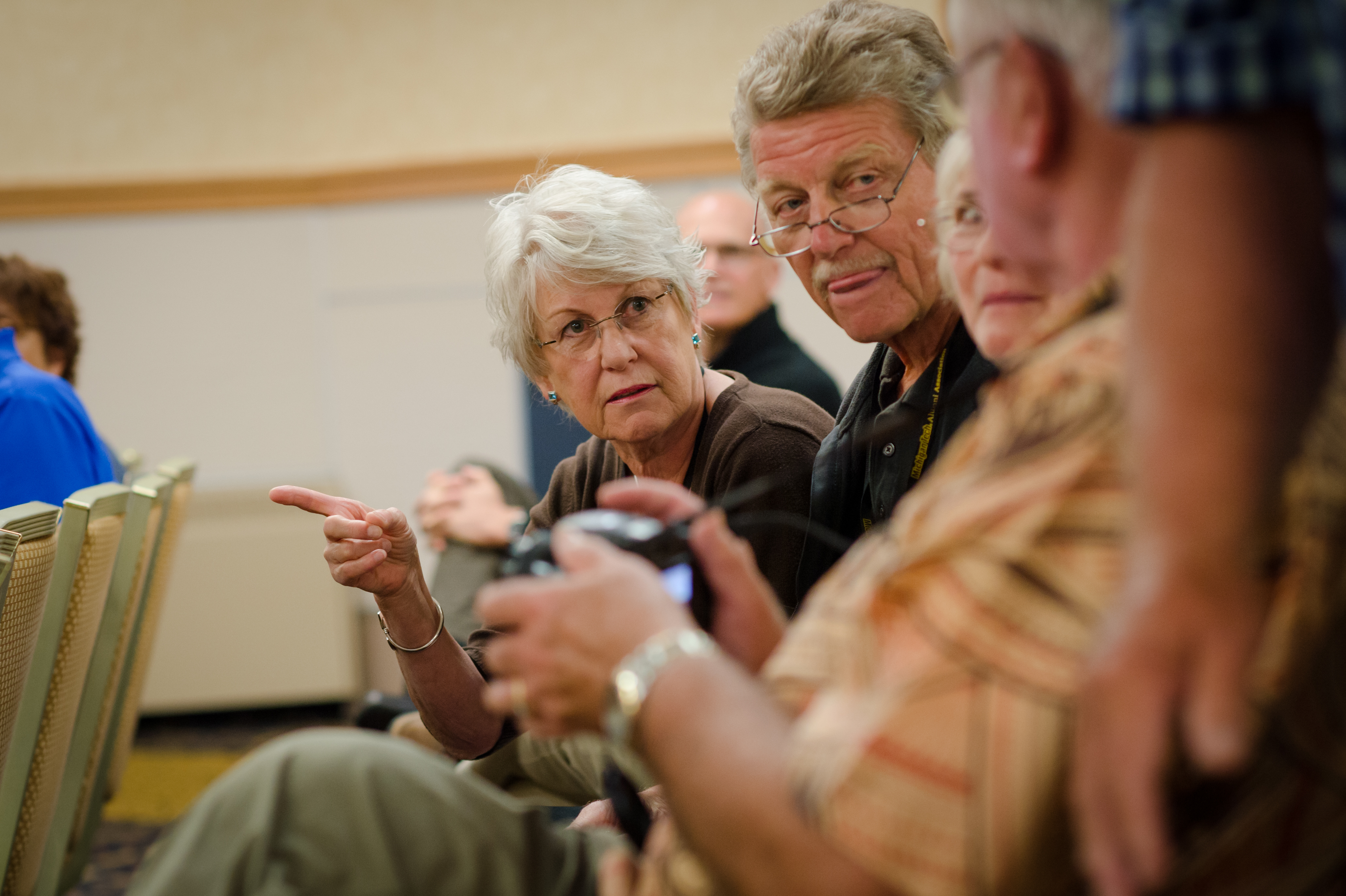 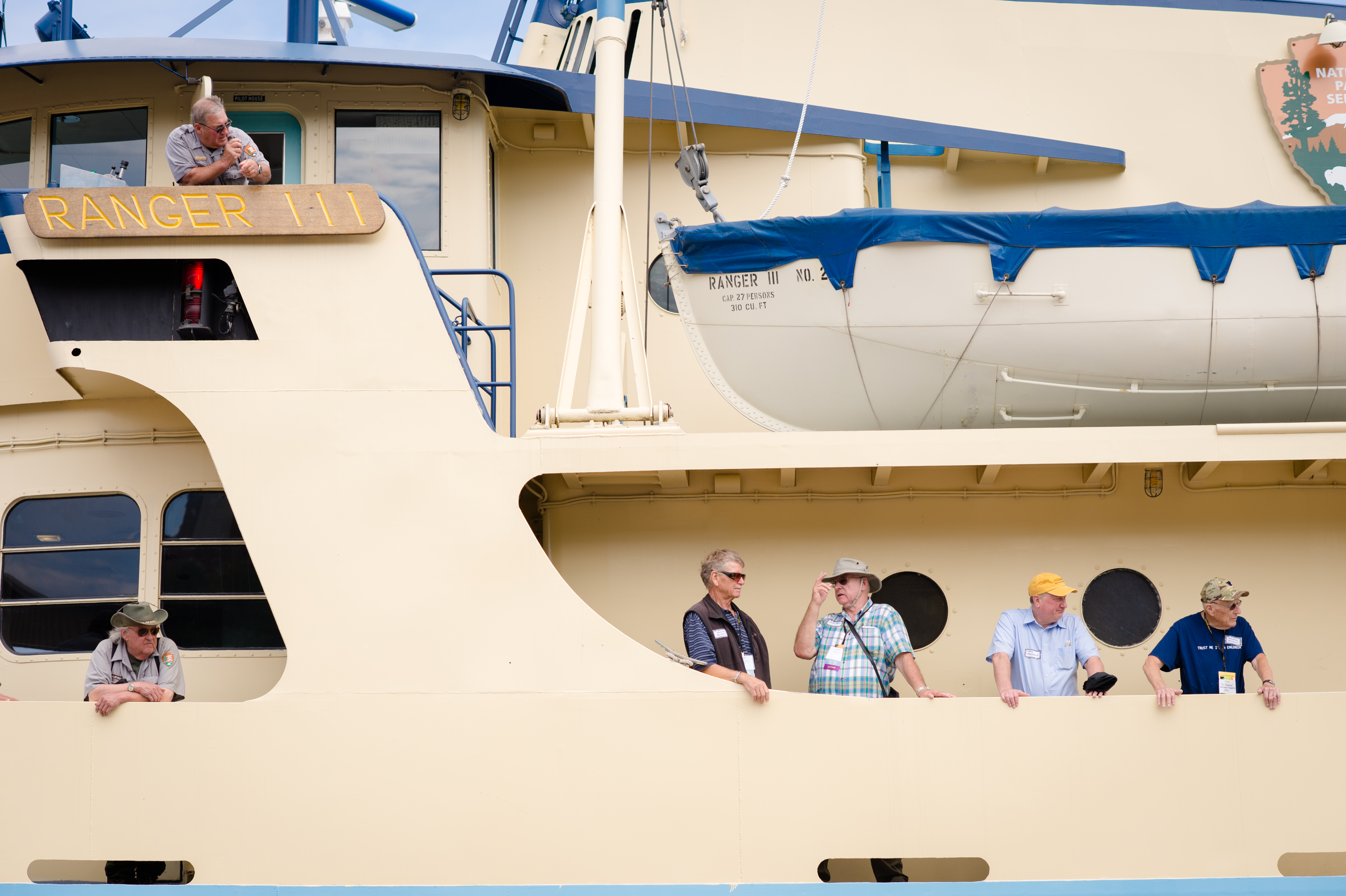 Alumni reunion always seems to be over in a flash. It was extra flashy for me this year, as I got back into town late right before the event—and my apologies to those of you I had hoped to meet, attending fewer events that I had originally planned. I seem to have picked up some kennel cough or whatever that feeling is you get after a long time in an airplane and have to breathe that air for hours. And even though I wasn’t there long, there is a bit of readjusting to changing three time zones. When I was out there sleeping until 7am felt late, and then back here I noted that I really should have been at work a couple of hours ago…

But it was fantastic to see town hopping so well, full parking lots and sidewalks, three days of packed schedules. And we have such a fantastic alumni awards ceremony, I wanted to share the write-up my colleague Mark Wilcox wrote up on it:

Joseph M. Nowosad, ’87, was the recipient of the evening’s most prestigious honor, the Distinguished Alumni Award. Nowosad’s current position is with ArcelorMittal, serving as manager of customer technical service for General Motors-NAFTA.

The Honorary Alumni Award honors the strongest non-alumni supporters of Michigan Tech. It recognizes individuals who have provided the service and support that are characteristic of a dedicated alumnus/alumna. There were two recipients this year. Lynda and John Fenn were honored for their support of surveying engineering at Michigan Tech. John Fenn established Fenn and Associates Surveying in 1978 and served as chair of the American Council of Surveying and Mapping. Also receiving an Honorary Alumni Award was B. Patrick Joyce, a professor in the School of Business and Economics at Michigan Tech for 38 years. While outstanding in the classroom, it is Joyce’s work for athletics at Tech for which he will be long remembered.

Maj. Justin M. Fitch (Ret.), ’05, is this years’ recipient of the Humanitarian Award. Major Fitch joined the Army ROTC program the summer after his first year at Michigan Tech. After a deployment in Iraq, he was assigned to the Natick Soldier Research, Development and Engineering Center in Massachusetts, taking command of the Human Research and Development Detachment. In May of 2012 he was diagnosed with metasatic colon cancer and has undergone multiple surgeries and more than 50 rounds of chemotherapy and other treatments. Despite his health issues, he has worked tirelessly with Carry the Fallen, a program to prevent suicide among veterans. (Justin is also, of course, the cover story of the most recent Michigan Tech Magazine and about as amazing of a person as I can think of.)

Susan L. Korpela, ’78, is this year’s recipient of the Outstanding Service Award. Throughout her career at 3M Company, Korpela has lived out her passion for K-12 STEM education. She has been a counselor, role model and speaker on many occasions and helped secure 3M Foundation/3M Gives funding, ,000 annually from 2011-2014 for Summer Youth Program Women in Engineering scholarships. She connected 3M and Tech on multiple occasions for a wide variety of programs.

The Outstanding Young Alumni Award was presented to Britta A. Jost, ’04. Jost, who was keynote speaker at the Student Leadership Awards Ceremony in June, joined Caterpillar Inc . in 2005 and is currently a senior engineer in large structures design engineering.

If you weren’t able to make it to Houghton this year, that’s okay—we’d love to see you in August 2016, though! And it’s never too early to reserve a hotel room…

While last issue seemed a bit light on content, there is a ton of news and sports info this time around. Hopefully this message doesn’t completely fill your inbox!

Check out the story of how basketball alumnus Ben Stelzer is off to Spain to play professionally. Or the news story about how carbon nanotube speakers generate sound through heat.

Or there’s the one that names Michigan Tech one of the top small-town colleges in America. You probably already knew that, though.

The Places feature hasn’t quite come off as well as I’d hoped, primarily due to this summer being insanely busy. We always have the belief ‘round these parts that the summer is quieter than the school year. That’s definitely not true for the Summer Youth Programs gang, obviously, and I’ve discovered that publications don’t much care what month it is either. I will get on that once things slow down and I get a few newsletters off of my to-do list!

And finally, we’ll have a special report in the next issue of TechAlum. Well, it’ll be a report for sure: I don’t know how special it will be in a writing sense. But in content, it will be brilliant: we’ve been speaking with some employers and alumni about the workforce here and the opportunities to stay here in the Keweenaw after school. It’s a growing trend, with offices popping up and students thinking about moving down the street rather than downstate. Stay tuned for that next time.

Michigan Technological University has been named one of America’s best small-town colleges by BestColleges.com, a database of colleges and universities designed to help students and their families learn about their options for higher education.

The report recognizes the 50 best small-town colleges nationwide.  Michigan Tech is 43rd on the list.  The institutions were evaluated . . . [ Full Story ]

Troy Bouman reaches over, presses play, and the loudspeaker sitting on the desk starts playing the university fight song. But this is no ordinary loudspeaker. This is a carbon nanotube transducer—and it makes sound with heat.

Graphene has been called a wonder material, capable of performing great and unusual material acrobatics. Boron nitride nanotubes are no slackers in the materials realm either, and can be engineered for physical and biological applications. However, on their own, these materials are terrible for use in the electronics world. As a conductor, graphene lets electrons . . . [ Full Story ]

HOUGHTON — The latest addition to what is rapidly becoming a mineral museum complex was unveiled and dedicated Monday afternoon by Michigan Technological University. University officials, museum supporters and many others gathered outside the A. E. Seaman Mineral Museum for the dedication of the Copper Pavilion, the new home of the Guinness World Record 17-ton . . . [ Full Story ]

The Princeton Review rankings focus on undergraduate education and are based on surveys of 136,000 students at the 380 colleges on the Best . . . [ Full Story ]

The dull black plastic of the device on Joshua Pearce’s desk belies its usefulness. Pearce picks up the box, which has a switch on the side and a small opening on top. A handful of vials sit in a bag nearby, and each would fit snugly in the opening. The set-up seems generic, even bland, . . . [ Full Story ]

Michigan Technological University has entered into a community health partnership with the Portage Health Foundation. The partnership combines both organizations’ missions, existing strengths and financial resources to create a collaboration focused on improving the health of the community.

Michigan Tech President Glenn Mroz announced the partnership at the University’s Board of Trustees meeting on Thursday, . . . [ Full Story ]

Joel Neves is no stranger to living and working in exotic places. The assistant professor of Visual and Performing Arts at Michigan Technological University has lived in Israel, Romania and Hawaii. He has conducted orchestras throughout the United States and the Orquestra de Cadaqués in Barcelona, Spain. However, one country that had eluded him in his world travels was China. That . . . [ Full Story ]

This research project explores the individual leadership competences of international judges, international prosecutors, and international court administrators and their support staff at the International Criminal Court (ICC) located at The Hague, Netherlands.

Future Huskies Jadon and Jaron rocking Michigan Tech t-shirts on the canopy walkway and viewing tower at the Myakka River State Park in Southwest Florida. They are sons of Tracy ‘99 and Jason ‘98 Prokopetz.

Alumni & friends from the Marquette Chapter met up at the Cognition Brewery for a tour & pizza social. Tech roots run deep at Cognition as the owner Jay Clancey shared stories of his grandfather who graduated from Tech in 1904.  Lots of friendly faces & fun stories from Pep Band to the “Drive of . . . [ Full Story ]

Gary Holcombe completed his baccalaureate degree in civil engineering in 1972.   He started his career as an Assistant Engineer with Richards, Findorff & Richards and in 1973 joined Gourdie-Fraser & Associates of Traverse City.  Over the eight years he was with the company, he moved up from Assistant Project Engineer to be Director of Engineering.  . . . [ Full Story ]

The Michigan Tech volleyball team was one of 752 programs nationwide to earn the American Volleyball Coaches Association (AVCA) Team Academic Award for the 2014-15 season.

The award, which was initiated in the 1992-93 academic year, honors collegiate and high school volleyball teams that displayed excellence in the classroom during the school year by maintaining . . . [ Full Story ]

HOUGHTON, Mich. — Former Michigan Tech hockey player and coach Herb Boxer has been named to the Upper Peninsula Sports Hall of Fame’s 2016 induction class it was announced over the weekend.

Boxer turned in a stellar career as a Huskies hockey player

PLATTEVILLE, Wis. — Michigan Tech soccer coach Michelle Jacob, who was a standout student-athlete at UW-Stevens Point from 1998-2001, was inducted into the Wisconsin Intercollegiate Athletic Conference (WIAC) Hall of Fame on Saturday (Aug. 1).

HOUGHTON, Mich. — Single-game tickets for all Michigan Tech events are on sale now at the SDC Ticket Office. The first ticketed Huskies’ event, football on Sept. 3, is less than one month away.

HOUGHTON, Mich. — Stretch Internet will be the home for Michigan Tech athletics video streams beginning this fall. All WCHA hockey games, as well as Tech’s home events in football, basketball, volleyball and soccer, will be available for fans through the Stretch Internet portal.

HOUGHTON, Mich. – Michigan Tech today announced that Gary Shuchuk (pronounced SHOE-chuk) has been hired as an assistant hockey coach. He will begin his duties immediately.

One of the more popular traditions at alumni reunion is the pasty picnic, and it’s been made even more fun with a pasty-making demonstration. When we hear about that things alumni miss, we hear of pickled eggs and pasties and certain liquids that are consumed and I shouldn’t talk about here.

With so much going on for alumni reunion, we’re saving up the mailbag for next issue. Keep those letters coming!