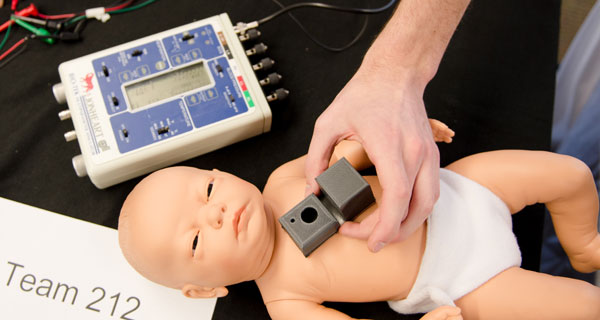 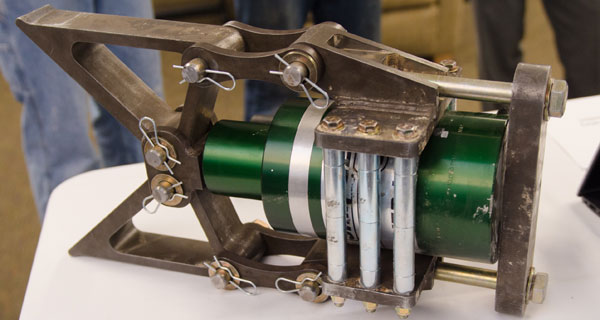 A heavy lift system for the Air Force. 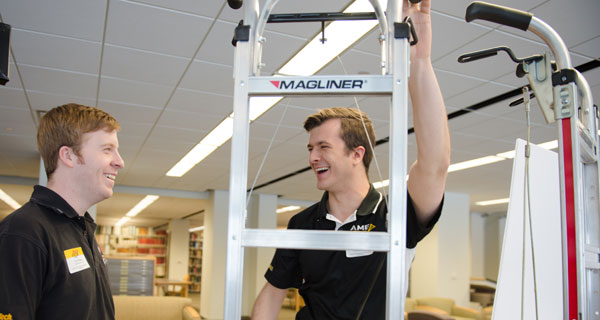 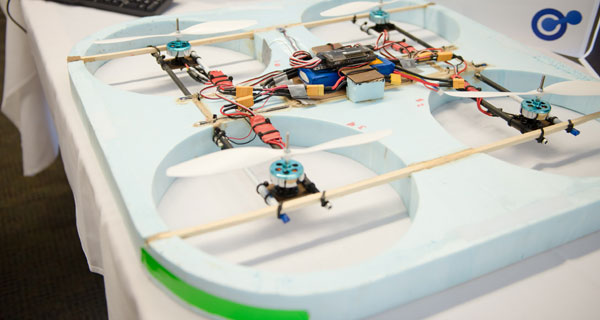 ITO2 showed off a drone. 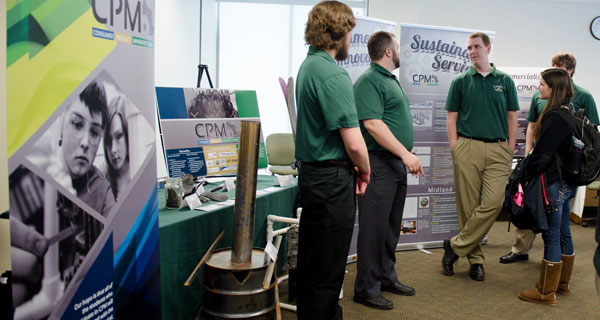 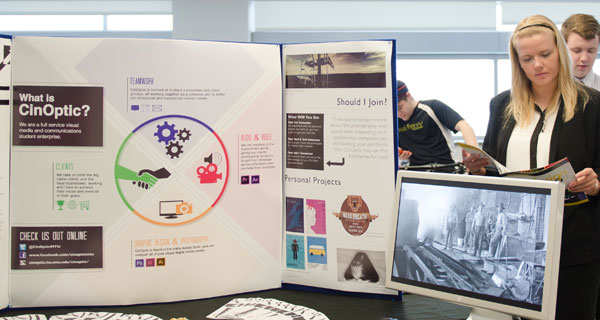 Cin/Optic does communications and media work. 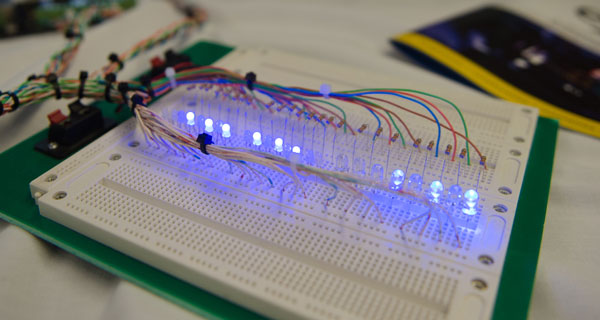 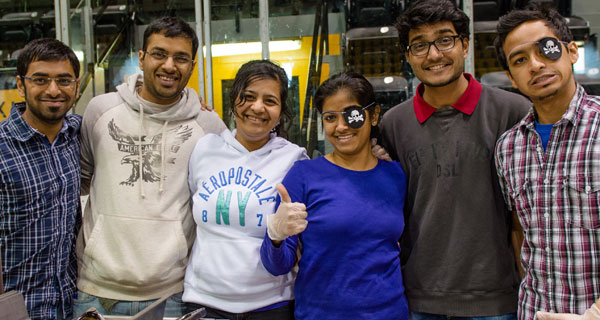 Hence the patches (indoors due to weather). 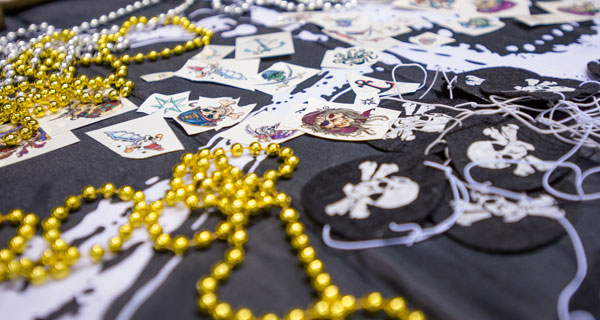 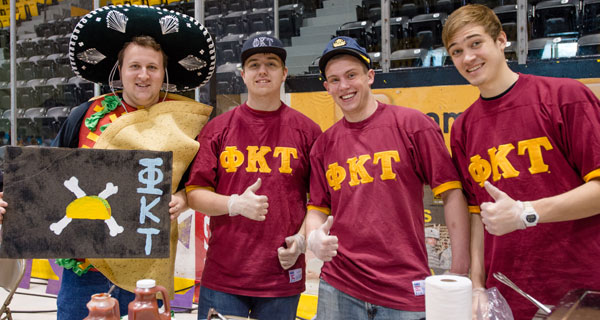 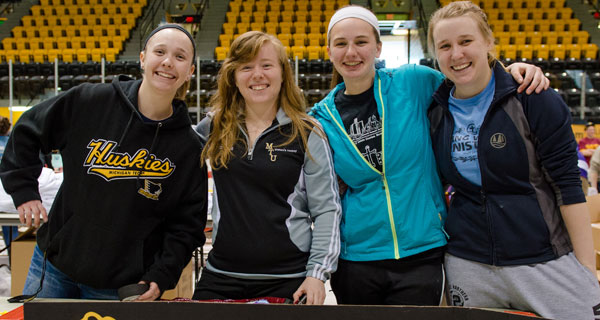 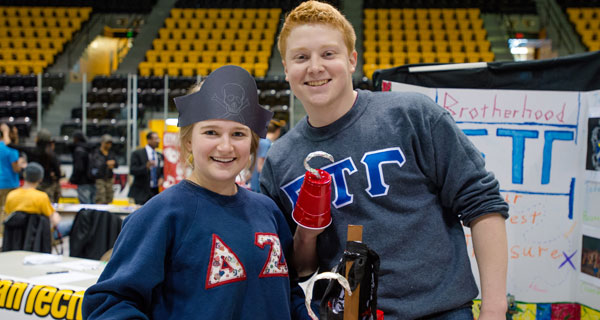 DZ and Sig Taus in the house. 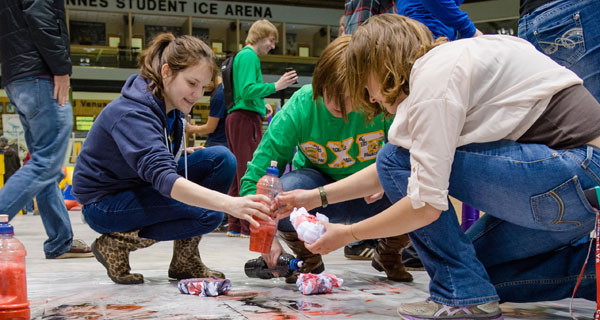 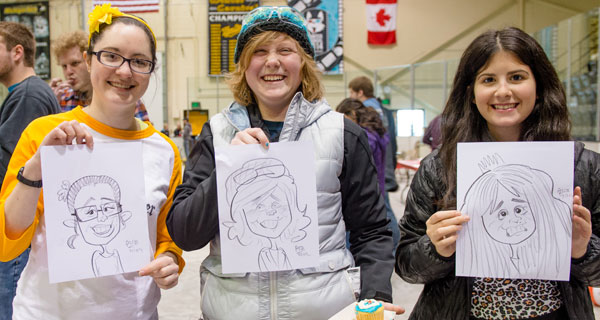 Editor’s note: Continuing our series of chats with emeritus faculty living locally, we caught up with Don Daavettila recently.

Physics Faculty Emeritus Don Daavettila fondly recalls the days of the nuclear engineering master’s program at Michigan Tech. And the fact that nuclear power seems to be coming back in vogue after nearly fifty years doesn’t surprise him.

“Nuclear is the way to go,” says the former chemistry and physics professor. “It’s a solid 20 percent of where we get our power today.”

Back in the heyday of the master’s program, Daavettila, who was trained in nuclear at Argonne National Laboratory, would take students on trips to visit Argonne, Zion Nuclear Station, and the University of Michigan reactors.

“It helped students get good jobs in the nuclear industry,” he says.

So why did the master’s in nuclear engineering end?

“It was more of an investment than the University wanted to do,” Daavettila says. “We did have two subcritical reactors in the basement of the old Koenig Hall. We used to be able to run some neat experiments, with enriched uranium fuel plates. We could show how the neutrons are absorbed into the fuel and release neutrons. The unit wasn’t big, not bigger than this table,” he says pointing to a small table in the corner of the room.

“Royal Makens was the department chair and was very supportive of the nuclear engineering program,” Daavettila says.

He misses those friends at Tech, and he misses the teaching.

“It never really goes away,” he says. “I loved telling students how what they learn fits into the big picture. I used to hear from a lot of the kids after they graduated.”

Today, Don spends his days taking care of his wife, Charlotte, and enjoying his 20 acres overlooking the Pilgrim River outside of Houghton. He also remains a great Tech hockey fan, after spending forty-plus years running the clock and scoreboard at Huskies games in the MacInnes Student Ice Arena.

He also sees more interest in nuclear engineering from some present-day Tech faculty members. The tide is turning.

“It [nuclear engineering] is quietly doing its job,” he says. “It’s staying out of the news.”

Certain names bring forth visceral associations. Alcatraz is one, but the notorious prison of the past is also a place for a Michigan Tech alumna to use some of her civil engineering skills in the present. Debra Campbell, a 1976 graduate, works for the National Park Service on Alcatraz, perched on an island in San Francisco . . . [ Full Story ]

Kathleen Halvorsen, whose scholarship bridges social and policy sciences relating to climate change, has been chosen to receive Michigan Tech’s 2014 Research Award. Professor Alex Mayer, who nominated Halvorsen for the award, called her “a major force in joining social science with natural science and engineering disciplines.” She is a professor in both the Department of . . . [ Full Story ]

Many kids dream of being astronauts, scientists and inventors, but they don’t believe they’ll ever make it there. One stumbling block is that it’s not considered cool to be smart or to be a “geek.” A collaborative group of students at Michigan Tech is working to change that assumption, using a heart monitor designed by Tech . . . [ Full Story ]

As the Pavlis Fundraising Board, our purpose is to raise and allocate funds for the Pavlis Institute of Global Technological Leadership. Throughout the semester, we have been planning an online auction. We’ve received many items that are unique to the UP and Michigan Tech that are connected to alumni. Among other items, we will be auctioning . . . [ Full Story ]

Just a reminder that the Alumni Way project is underway, so now is the time to reserve your engraved paver commemorating your relationship with Michigan Tech.  Hundreds have been purchased already, so don’t delay!

Lights, Music, Action! Jeff Larson has always felt he had an advantage in life: exposure to his passion, electronics, early on—in his case, as a tot. He was taking things apart when he was four; he experimented with a small Tesla coil when he was in grade school; he built a bigger one when in . . . [ Full Story ]

Michigan Tech today unveiled its 2014-15 hockey schedule. The 94th season in Huskies history will feature 19 home dates and a top-notch non-conference slate. Highlights of the schedule include a home series against Michigan and another vs. Minnesota Duluth, the 50th annual Great Lakes Invitational in Detroit, two home-and-home weekends with rival Northern Michigan and a . . . [ Full Story ]

A 51-yard passing play from Isaiah Hackney to Anthony Root and a pass breakup by Aidan Wienke near the goal line in the final two minutes were the big plays in Team White’s 10-3 victory over Team Black in Michigan Tech’s annual spring intrasquad game played today at Sherman Field. The game feature . . . [ Full Story ]

The Michigan Tech track and field teams competed at the Al Owens Classic on Friday and Saturday (Apr. 18-19) at the GVSU Track & Field Stadium. Over 900 athletes participated in the meet with the Huskies breaking two school records. The men finished third overall in a field of 21 collegiate teams with 52 points. Host . . . [ Full Story ]

When it was held outdoors, unlike this year.

Is that what this was called?

Spring 1970, and the Gazette write-up says it all:

“It’s springtime. It’s been a long winter at Michigan Tech University. Classes and tests aren’t the only important things to worry about. All other approaches by the young man in this top floor dorm room have failed. His last hope apparently is that his girl will . . . [ Full Story ]

In the spring of 1968 there was a club called “The Cave” in the basement of the Ambassador Bar. One entertainer who played there was a single guy who knew a lot of Ian and Sylvia and Joni Mitchell songs. This was long before I started singing and playing professionally myself. Looking back, two things strike . . . [ Full Story ]

Good Morning,
Dean Meese spoke at an orientation session at the gym the 1st week of September. He told us to say hello to the person on either side of us as 1/3 of the gathered assembly would be gone by Christmas. I made sure I wasn’t part of that crew. Welcome to Michigan Tech!

Dennis,
We were engaged during the 1963 Winter Carnival. We were married the following year and will celebrate our 50th wedding anniversary this coming August. We will be up this July for a Vet’s Club reunion. Will stop in and say hello and a little chat. Keep up the great newsletter. We always look forward the . . . [ Full Story ]

Good Morning Dennis, I’m sure you followed the progress of the seasons Hockey from the regionals through the finals on Saturday. I’m sure I wasn’t alone pulling for Union to knock pull off an upset and would only have enjoyed it more if it had been our Huskies.

Hi Dennis,
If I remember right there’s a picture of Lucretia Marks supposedly arriving at Tech by train in the ’59 Keweenawan. Possibly it could have been ’60. She was a year behind me. Also the guys took the train down to Chicago for their preinduction draft physical as well as senior inspection trips to . . . [ Full Story ]

Dennis –
My dog Nina used to hang out with us on statue back in 2001-02 time frame. I can’t seem to find the picture, but I know she was in one of the winter carnival books. It would be a picture in front of the alumni house when Alpha Xi Zeta would do . . . [ Full Story ]

The EERC was built in the mid 70′s. I think it was completed in 1977, just after I graduated. Half of Hotchkiss Hall was torn down to make way for construction and the other half after it was completed. A false wall was installed at the open end. It looks like the picture was taken . . . [ Full Story ]

I can tell you that the guy in the blue shirt with his back to you is Rob Greenhoe. He was an IT guy on campus for many years. He may know who he was talking to.

Dennis,
In the picture of the guys in the Hobo Parade ’83, the guy in the middle (adjusting his glasses, or tipping his hat) looks a lot like Alex Barker from Menominee (my home town). He would’ve been in the class of ’86 if he graduated in four years, so he was a sophomore . . . [ Full Story ]

While the clip of making the Lone Ranger railroad is fascinating, their claim to the best locomotive chase doesn’t ring true… watch “The General” made in 1926 by the great Buster Keaton. The locomotives are real ( albeit backdated from 1920’s build dates to look more like Civil War-era engines ), the stunts are real . . . [ Full Story ]

Hello Dennis,
I’m not sure how often a Tech alum ends up along this path, so perhaps it warrants passing on. I was a tech student from ’05-’10, and have been accepted into divinity school in Chicago. I’ll be going on to become an active Minister in the Unitarian Universalist faith. I don’t know . . . [ Full Story ]

Take advantage of a “yourname@mtu.edu” email service (powered by Google) provided by your Alumni Association in cooperation with Michigan Tech’s Information Technology Services.

Sign up for your alumni email account today through the HuskyLink online community. If you are not already a member, visit www.huskylink.mtu.edu/join for details on how to join.

Once you have set up your “@mtu.edu” email account, you can access your email on the web from anywhere by visiting huskymail.mtu.edu.

Students are welcome to continue using their “@mtu.edu” email account after graduation.