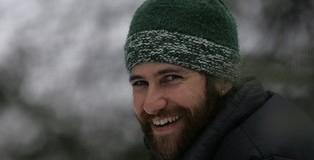 It's not about wolves. For this lecture, John Vucetich talked environmental ethics and how it bridges into the world of environmental sciences and natural resource management.

"Much of my work is aimed at developing insights that emerge from the synthesis of science and ethics,” says Vucetich, a professor in the School of Forest Resources and Environmental Science (SFRES) at Michigan Technological University. "Environmental ethicists and environmental scientists have a common goal, which is to better understand how we ought to relate to nature,” he adds. “Nevertheless, these two groups employ wildly different methods and premises, and sadly, they rarely interact.”

"Science can never tell us what we ought to do or how we ought to behave. Science only describes the way the world is. Ethics by itself can't tell us what to do either. Ethics needs science—facts about the world—to be properly informed."John Vucetich

Vucetich presented the Fall 2017 Distinguished Lecture at the Michigan Tech Research Forum. His lecture, "It’s Not About Wolves: Interdisciplinary Knowledge for a Sustainable, Just and Prosperous World," took place November 7, 2017.

Vucetich joined the Michigan Tech Isle Royale Wolf-Moose study in the early 1990s as an undergraduate student majoring in biological science. He went on to earn a PhD in forest sciences at Tech in 1999. Three years later, Vucetich began leading the study along with SFRES research professor Rolf Peterson, who is now retired. This year will be the team's 60th year of monitoring wolves and moose on Isle Royale—the longest running predator-prey study in the world.

SFRES Dean Terry Sharik says, "John’s interdisciplinary perspectives on wolves and their role in coupled natural and human systems have elevated this globally recognized study to another level."

Q: You are an ecologist and an environmental ethicist. Did this happen gradually, or was there a moment when you knew that you wanted or needed to combine both?

About a decade ago, when I first began nurturing those thoughts, I also found an ethicist who shared those views. We became colleagues and friends. Much of the work I do today is still in collaboration with Michael Paul Nelson, now at Oregon State University.

Q: How do they complement each other?

Knowing how we ought to relate to nature requires synthesizing both scientific knowledge and ethical knowledge.

Q: Would you add other titles (or roles) to the list?

A: My other calling in life is that of a sailor—racing, cruising, skippering, crewing, repairing and maintaining sailboats. When all is going well, sailing is a beautiful harmony amongst nature’s wind and waves and the sailboat, a reasonably complicated machine, and the crew’s ability to work with that. Finally, and certainly not least, there is no better way to share time with my wife, Leah.

Q: What is the biggest challenge you face in working with transdisciplinary teams?

Jargon is another—and related—challenge. Take a simple example, like “value.” It’s important jargon for both ethicists and social scientists, but the meaning of that word to those groups is just different enough. I’ve had conversations with social scientists and ethicists where we all confidently believed we’re talking about the same thing, when in fact we were not.

Q: What has changed the most in each field (or the combination) over the past decade or two?

A: In the past two decades, the number of scientific publications has quadrupled. Along with that increase, something like a quarter of papers published in the natural and social sciences are never cited.

I’m afraid the first statistic is associated with deepening the isolation of knowledge among disciplines. That second statistic is not unrelated to the first, and is troubling in so much as we aspire, or are encouraged to aspire, to produce highly-cited research. Because academia is a lumbering and conservative institution, I don’t anticipate especially effective, collective response to those concerns in the near-term future. And, I do not know how any individual scientist ought to best respond.

But, I know my response has been to judiciously limit the portion of time I spend deepening my understanding of knowledge from my native discipline and sub-disciplines. I hope that’s a wise response. Doing so seems to have been an inescapable—and non-trivial—cost of deepening my understanding of knowledge outside my native discipline and sub-disciplines.