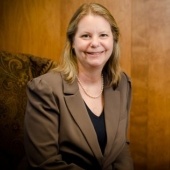 Jacqueline Huntoon is provost and senior vice president for academic affairs at Michigan Technological University and has served in this role since 2015. She is also a professor in the Department of Geological and Mining Engineering and Sciences.

Huntoon has been recognized nationally for her leadership in education. She is a member of the Federal STEM Advisory Panel, which provides advice and recommendations to the Federal Committee on Science, Technology, Engineering, and Mathematics Education (CoSTEM). She is also a member of the MiSTEM Advisory Council, which provides Michigan’s governor, legislature, Department of Labor and Economic Opportunity, and Department of Education with advice on promoting innovation and collaboration in STEM statewide.

Huntoon earned her PhD in Geology at The Pennsylvania State University. Her first academic appointment was as an Assistant Professor at Michigan Tech. She took on an assignment as a program officer in the Directorate for Geosciences at the National Science Foundation (NSF) from 2003 through 2005. After completing her term at NSF, Huntoon returned to Michigan Tech to serve as dean of the graduate school from 2005 to 2015. She is a member of a number of STEM-related societies and is a Fellow of the Geological Society of America.

She has also served on many committees and boards related to STEM and education, including the Executive Committee of the Council on Academic Affairs of the Association of Public and Land-Grant Universities, the Board of the Michigan Science Teachers Association, and the Graduate Record Exam Board. In 2016, in recognition of her scholarship in STEM education and the geosciences, Huntoon received the prestigious Charles L. Hosler Alumni Scholar Medal from The Pennsylvania State University. In 2019, Huntoon received the George G. Mallinson Award for Lifetime Achievement in the Field of Science Education from the Michigan Science Teachers Association and was named a Notable Woman in STEM by Crain’s Detroit Business.

Huntoon has received more than three dozen sponsored project awards, many of which supported work to improve the quality of teaching and learning in middle grades. From 2009 to 2016 she helped lead an NSF-funded Math Science Partnership (MSP) project that improved science, technology, engineering, and mathematics (STEM) teaching and learning and enhanced teachers’ leadership skills. For many years she taught a field course that engaged practicing teachers in learning geology in and around the National Parks of the southwestern US. She currently leads an NSF-funded Robert Noyce Teacher Scholarship Program that is developing a cadre of teacher-leaders prepared to implement research-based STEM-education reforms. She is also involved with the STEM-education effort known as Mi-STAR (Michigan Science Teaching and Assessment Reform). This initiative has resulted in the development of a new middle-school curriculum and associated professional learning materials that fully aligned with the Michigan Science Standards and the Next Generation Science Standards.