Connecting People and Geology on Volcanoes

Luke Bowman was also there, helping direct radio calls and conducting fieldwork. Bowman, who recently defended his doctoral research in geology at Michigan Technological University, studies geohazards on San Vicente. The Journal of Applied Volcanology recently published some of his research, co-authored by Kari Henquinet, director of the Michigan Tech Peace Corps Master’s International Program and a senior lecturer in the Department of Social Sciences. Their work combines traditional hazard assessments with social science techniques to develop a more in-depth understanding of the risks present at San Vicente Volcano in El Salvador.

Fire, brimstone and destruction dominate the portrayal of volcanoes around the world. But in reality, a number of people live on their slopes. For these communities, eruptions are only one of the risks—other geohazards like landslides (lahars) and flooding pose more frequent threats.

The 2011 rainstorms in El Salvador are a case in point as well as a testament to the importance of expanding geohazards studies to include the people they affect.

“In 2009, as heavy rains fell on San Vicente volcano, most people were waiting for civil protection to issue a warning—and that warning never came,” Bowman says, adding that a landslide crashed down the volcano that year, and many communities within the five municipalities that encompass the northern flank of the volcano were affected, with homes and properties destroyed, infrastructure damaged and lives lost. 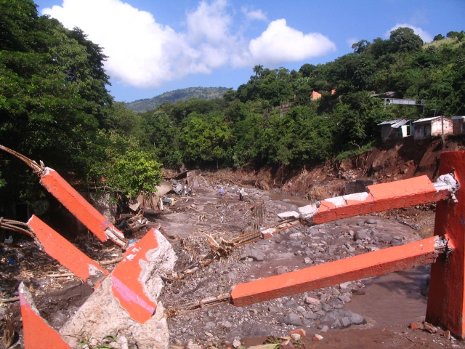 “Now, after significant changes in monitoring and reporting hazards, local residents are the ones who gather the rainfall rate data, who measure the cracks and who report it around the community to each other,” Bowman says. “I think it gives people some say in the decisions being made.”

Empowering communities is part of what Bowman hopes to do with his research, but he says it goes beyond just including local citizens in data gathering.

“No matter how good the science is, or how well we can predict where a hazard could occur, there’s still a human component we shouldn’t ignore,” Bowman says, adding that local communities often have a stronger working knowledge of a place than outside researchers. He says researchers can be of greater help when they have a clearer understanding of the broader social and cultural context of geohazards.

“Most people think of geologists as just going out and identifying rocks,” Gierke says, explaining that geoscience is much broader and that researchers try to understand how the earth works. “And there’s a growing interest in having a stronger connection between physical science work and the impacts on communities.”

Gierke, who was Bowman’s PhD co-advisor with Rose, says bridging the social and physical worlds is a focus of the studies in Michigan Tech’s Peace Corps Master’s International Program. Bowman, who served in the Peace Corps in Honduras before his graduate studies, is a model for other geoscience and Peace Corps students looking to broaden their physical science research.

Incorporating social science techniques—like ethnographic interviews and participatory observations of community meetings—is no easy feat for physical scientists, who have not been trained to think that way. Collaboration is important, and Henquinet worked with Bowman on his volcanology research to round out his social science data gathering methodology.

“The ethnographic approach is immersion,” Henquinet says, explaining researchers have to learn in the field and adjust their work accordingly. “It’s an approach that’s exploratory, grounded in reality and the context that people live in, so you’re not isolating or manipulating an experiment in a lab.”

For the San Vicente studies, Bowman analyzed quantitative physical data—everything from rainfall to slope stability calculations—along with qualitative social data from one-on-one interviews, community gatherings and key documents. As a result, he and Henquinet were able to delve deeper into the socio-economic limits that forced people to live in active landslide zones. That also enabled them to suggest more realistic evacuation plans and emergency protocols because the local communities were invested participants in the work, plus social vulnerability was accounted for in addition to geophysical vulnerability.

“At the end of the day, there are a lot of political issues that have to be considered in understanding vulnerability and inequalities,” Henquinet says, explaining that the San Vicente research is a small step across a big gap in socio-economic conditions. “Countries like El Salvador are rich with people with ideas—if we want to give these ideas a chance in combating poverty, then give people who live there more voice to work in partnerships.”

Although small in the world’s grand scheme of politics and volcanoes, San Vicente is an example of how people can make a difference. Henquinet and Bowman both say they hope their research has contributed to those changes and that more physical scientists are inspired to collaborate with social scientists too.