The Last Flight of John Hascall

By Scott Balyo
Share this story:
Nancy Krohn, 93, of Ann Arbor remembers her brother John. A Husky and neighborhood hero.

In the Netherlands American Cemetery in Margraten lie the graves of 8,301 Americans killed during World War II. In Plot H, Row 8, Grave 9 rests John Sherman Hascall. His story, like all the others, is far too short.

When you live on Lake Superior, one of the first things you learn is how to swim.

Growing up in Marquette, Nancy Krohn remembers her older brother John teaching her in those cold waters. Now 93 and living in Ann Arbor, she also recalls he was the neighborhood hero.

John. Athletic, good-looking, full of life. It's said he could swim like his namesake, 1924 Olympic gold-medalist and Tarzan actor Johnny Weissmuller.

Their family was close-knit, so while his decision—like those of thousands of others—to fight for his country was an honorable choice, it was also likely a difficult one.

After all of the years, Nancy holds on to the memories of her brother, and his Purple Heart medal, with pride.

John probably remembered her too as he was shot down.

It's unlikely he panicked, thinking until those last moments it would be okay. He'd survive, fight on, liberate Europe, and return to America to restart his life.

Born in Calumet on New Year's Day, 1918, he grew up in Marquette, where he loved to ski, camp with his family, and play hockey.

A lot of hockey.

"My brothers grew up playing . . . everybody played when they could," Nancy recalls. "They played serious hockey growing up. The only time I played was if they were short, and they would recruit me to be the goalie. One year, I got a black eye."

John was a Husky, graduating from Michigan Tech in 1939 with degrees in mining engineering and geology. He was in ROTC, a member of Theta Tau, on the staff of The Lode, and a standout on the hockey team. It's not surprising he chose Tech; his father Carleton Hascall graduated in 1911 with a degree in mining, and brother Carleton Jr. preceded him by two years, graduating in 1937 with a metallurgical degree.

Nancy, six years his junior, would often visit John during his years in Houghton.

"I remember going up to Michigan Tech. The Theta Tau house was across from campus. I loved going into the fraternity house and was in love with all of the boys," she recalls with a laugh.

And, then, as now, a rivalry existed between the schools in Houghton and Marquette.

"When Michigan Tech came down to play the (Northern State) Normal School (now Northern Michigan University), we would always go to the game. One year my mother and I were at the game and Johnny got injured and he was taken to the hospital. It wasn't too serious," Nancy says.

John moved west after graduation, working for the Colorado Fuel & Iron Company before enlisting in the United States Army Air Forces on April 7, 1942—like so many of that time, putting the freedom of others before his own.

A 2nd lieutenant in the 77th Fighter Squadron, 20th Fighter Group, John flew P-38s on bomber escort missions. After 18 months of service, he would take his final flight. Accompanying B-17 bombers from Kings Cliffe, UK, to Bremen, Germany, he was shot down by German pilot Lt. Leopold Munster, November 29, 1943.

An eyewitness, J. J. Van der Luur from Steenwijk, a fighter with the Dutch resistance cycling through the area, saw John's damaged plane appear through the clouds and fall near Schutsloterwijde, a small lake near Belt-Schutsloot in north-central Holland. Bailing successfully, John landed in the middle of the lake, strong winds blowing him across its surface. Struggling but ultimately unable to remove his tangled parachute, John drowned. Local residents rushed to save him, and a doctor spent three hours trying to resuscitate him.

In a letter to John's family, Van der Luur described those final moments.

"He lied there, just quietly and not wounded or damaged at all. His face was calm and nothing of fright or something like that was in its expression. It was just as if he slept after a tiresome job."

In a small ceremony, John was buried in the Wanneperveen village cemetery. Local residents brought flowers to his grave. His remains were moved to  Margraten after the war, and his plane lay undiscovered until 1981.

"I remember John came home at Christmas and the family talked it out, but they didn't include me," she said. "I was always kind of neglected as far as conversations went. John told them he was going to enlist and he did."

Their older brother Carleton delivered the news that John had been killed in action.

"I heard shortly after my parents did. I was in college in Ann Arbor at that time. My other brother lived in Grosse Ile and gave me the news firsthand. He came over and we talked about John."

She was 20 at the time. Over 70 years have passed, but she has never forgotten him and was pleased to learn that others haven't forgotten either.

Today, his grave often has flowers, tended by the same Dutch family for over 60 years after Jeanne van der Venne-Habets of Eijsden adopted it in the early 1950s.

Before passing away in February 2016, she passed the duties to her son, Theo van der Venne.

"As the eldest son I have taken care of Lt. Hascall's grave after my mother could no longer do it," he says. "I take flowers to the grave every time there is a commemoration at the cemetery in Margraten."

Theo cites a desire to remember those who sacrificed everything for his country as motivation.

"I think our generation must realize what happened in the war of 1945," he says. "We have had a lot of caring for the soldiers killed for our freedom, and are giving back now. This has to happen in areas where the war was for peoples' freedom."

And John's grave will be tended for many years to come.

"We have five children at home, one brother, and three sisters so we will continue my mother's work of taking care of the grave," Theo says.

And members of the van der Venne family are not the only Dutch citizens remembering the American soldiers who gave their lives in the liberation of the Netherlands. Every grave at Margraten has been adopted by Dutch families, and there's a waiting list.

John's sacrifice, and those made by hundreds of thousands of young soldiers during WWII, are especially remembered in the words of witness J. J. Van der Luur.

". . . when I saw John lying there in a certainly unknown village to him and also to you, I stood thinking and knew that there was a great difference between his and my fighting. I fought in my own country and for my own country, but he was fighting outside his country for another country so that everybody might live there in peace and freedom just as in America . . . I thanked him for this sacrifice. I will never forget those moments." 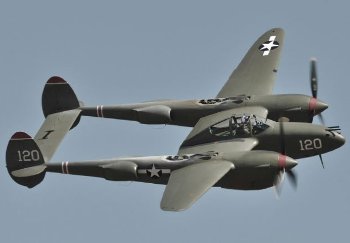 John was shot down while flying P-38s, “fork-tailed devils,” on bomber escort missions between the UK and Germany during WWII. 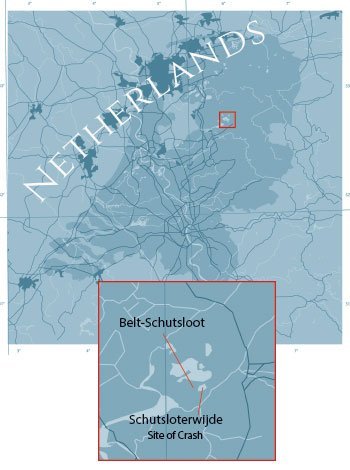 John bailed from his plane above Schutsloterwijde, a small lake in the Netherlands.