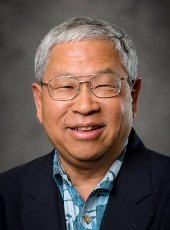 Lyman Morikawa earned the degree Bachelor of Science in Electrical Engineering from Michigan Technological University in 1971 and was commissioned into the US Army Corps of Engineers. He continued on to receive a Master of Business Administration from the University of Hawaii in 1990. After leaving Michigan Tech, he worked at the Hawaiian Commercial & Sugar Company (HC&S) in factory automation and power generation and later at the Maui Electric Company (MECO) in power distribution and substations. He also started an electrical engineering company, an electrical contracting and electric motor repair facility, as well as an electrical sales company. Since 1990, as manager and a principal of Morikawa & Associates, LLC, the company has been working with renewable energy dealing with utility scale solar photovoltaic power generation, combined heat and power generation (CHP), and ways to reduce the energy footprint at wastewater treatment and healthcare facilities. The office is partially powered by a >10kW solar system (grid and off-grid connected) and uses solar-powered ventilation and lighting. Lyman is licensed as a Professional Engineer in nine states (including Michigan) and Guam. He and his wife Marilyn reside in Pukalani, Hawaii.