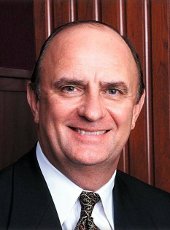 Lawrence Laurich earned the degrees Bachelor of Science and Master of Science in Electrical Engineering from Michigan Technological University in 1965 and 1966, respectively. As an undergraduate at Michigan Tech, Larry earned 8 varsity letters and served as co-captain of the basketball and track teams in his senior year.  After graduation he joined IBM and worked his way up through the Systems Development Division in Boulder, Colorado.  In 1979, he became Vice President of Tandem Computers largely overseeing Tandem’s technology development and was credited with the turnaround of its UNIX unit.  Larry is an experienced high-tech leader:  he was the Senior Vice President and COO for NexGen SI Inc (1997-98); CEO of N-Light Systems (1998-99); President & CEO of Vision Solutions Inc (1999-2000); CEO & President of ElectroCom Systems (2000); CEO of IPMobileNet (2000-03).  Larry is the co-founder (2004) and President of DRC Computer Corporation, a Silicon Valley firm that designs and markets advanced reconfigurable coprocessors to execute complex algorithms with applications in image processing, cryptography, data security, and financial analysis.