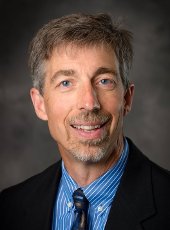 Barry Van Veen earned the degree Bachelor of Science in Electrical Engineering from Michigan Technological University in 1983, and the degree Doctor of Philosophy in Electrical Engineering from the University of Colorado in 1986.  He has been with the University of Wisconsin-Madison’s Department of Electrical and Computer Engineering since 1987 and is currently the Lynn H. Matthias Professor.   Barry’s research involves statistical signal processing and its applications.  At Wisconsin, Barry also has as an affiliate appointment with the Department of Biomedical Engineering, and is a member of the University’s Carbone Cancer Center.  Barry received a 1989 Presidential Young Investigator Award from the National Science Foundation and received a 1990 IEEE Signal Processing Society Paper Award. He served as an associate editor for the IEEE Transactions on Signal Processing and on the IEEE Signal Processing Society's Statistical Signal and Array Processing and Sensor Array and Multichannel Technical Committees. Barry coauthored the undergraduate textbook "Signals and Systems” (1st Ed. 1999, 2nd Ed. 2003, John Wiley & Sons, Inc.) with Simon Haykin.  He received the Holdridge Teaching Excellence Award from the ECE Department at the University of Wisconsin in 1997 and the Harvey S. Spangler Award for Technology-Enhanced Instruction from the College of Engineering at the University of Wisconsin in 2014. He is a Fellow of the IEEE. Barry and his wife Kathy reside in McFarland, Wisconsin.