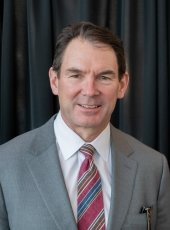 Russell (Russ) Becker completed his bachelor's (1989) and master's (1991) degrees in civil engineering at Michigan Tech. He is the Chief Executive Officer and President of APi Group, one of the largest providers of specialty services in North America and the largest provider of life safety services in the world. Russ' continued commitment to overall excellence has inspired APi Group to create a culture of leadership by building an exceptional learning and development program, a highly selective Leader Development Program, and an award-winning veteran's hiring program.

Russ began his career as a field engineer with Cherne Contracting. He moved on to become a project manager for Ryan Companies during the construction of the Greenfield Recycled Paper Mill project for Liberty Paper. Upon completion of his project, he joined APi Group's subsidiary, The Jamar Company, in Duluth, Minnesota. He started as manager of construction and was named president in 1998, where he served until joining APi Group as president in 2002.

From the 2022 Induction to the Civil, Environmental, and Geospatial Engineering Academy.